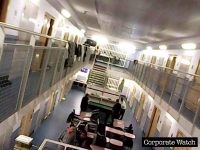 U.K. asylum seekers have gone on hunger strike to protest living conditions at Harmondsworth immigration detention centre, which is run by Mitie, a British outsourcing company. The protests come months after Mitie took over from the Geo Group whose contract was canceled after prison authorities found repeated problems.

Mitie (which stands for Management Incentive Through Investment Equity) was awarded a Â£180 million ($270 million) eight year contract by the UK Home Office last year to manage the 615-bed Harmondsworth facility and merge it with the Colnbrook detention centre which is situated next door.

The company won the bid despite the fact that it had almost no previous experience managing such facilities, apart from a 20111 contract to run the Campsfield site in Oxfordshire, where a major fire, multiple suicides and three mass hunger strikes took place under the company's watch.

Last week Corporate Watch,* a U.K. research organization, released undercover footage shot at Harmondsworth, that illustrated some of the detainee's complaints. Paul Morrison, the Mitie officer in charge of Harmondsworth, was filmed telling a group of men that they will being locked away for an extra two hours a day. "We've only got 'X' number of staff";" Morrison says. "The only way we can realistically (deliver) is a little bit of an earlier lock up."

The researchers also reported that Mitie staff were being forced to work 13.5 hours a day.

Other footage released by Corporate Watch showed a detainee who had apparently collapsed from epileptic fits twice within a fortnight. The organization also reported that another "very depressed" detainee set fire to his cell.

"It's just gonna break. There's only so much people can take," a Mitie employee was filmed saying on undercover footage.

The company denies that they have problems. "The centre is not at breaking point," a Mitie spokesperson told the Independent newspaper. "We have implemented new working practices and shift patterns to meet the demands of the new contract. During the six-month mobilisation period prior to the contract transferring to Mitie we undertook extensive on-site consultation with all existing members of staff at the centre."

Days after Channel Four screened the Corporate Watch footage, an estimated 240 asylum seekers went on hunger strike at Harmondsworth. "The staff tell us that if we don't stop our strike and disperse, we will end up in jail," Abbas Haider, a spokesman for the hunger strikers told the Independent. "But all the guys say in one language, in one sound: 'We are already in prison.' We don't have any human rights left here."

Harmondsworth has often been the site of mass protests over abusive conditions. In 2006, riot police were brought in to quell disturbances. Last May when the center was still under control of the Geo Group, some 300 detainees also went on hunger strike.

"The food is disgusting and our freedom has been taken away. We all feel we are going crazy," a detainee told Vice magazine at the time. "We feel alone and isolated like we have been left in the middle of the bush."

And Geo Group and Mitie are not the only controversial companies that have contracts to manage UK detention centers. Serco runs Colnbrook while G4S runs Brook House. Both companies have been subject of complaints regarding the treatment of detainees. (see Privatizing Asylum Housing: Serco and G4S Get UK Contracts and Family Sues G4S For Killing Angolan Deportee)

Many detainees now say that they would rather be deported than stay at Harmondsworth. "I'm tired, I don't want to die here," one detainee was filmed saying to his lawyer. "I beg you. I want freedom, I got detained, three years now I've spent my life behind doors. Why?"

"Detention is only ever used as a last resort after all attempts to encourage individuals to leave voluntarily have failed," a UK Home Office spokesperson told the Independent. "Detention and removal are essential parts of effective immigration controls."

* Corporate Watch is a UK charity that is not affiliated with CorpWatch, which is based in the U.S. The two organizations were founded independently but share similar missions and visions.