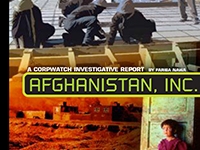 Contractors in Afghanistan are making big money for bad work

A highway that begins crumbling before it is finished. A school with a collapsed roof. A clinic with faulty plumbing. A farmers' cooperative that farmers can't use. Afghan police and military that, after training, are incapable of providing the most basic security. And contractors walking away with millions of dollars in aid money for the work. The Bush Administration touts the reconstruction effort in Afghanistan as a success story. Perhaps, in comparison to the violence-plagued efforts in Iraq and the incompetence-riddled efforts on the American Gulf Coast, everything is relative. A new report "Afghanistan, Inc.," issued by the non-profit organization CorpWatch, details the bungled reconstruction effort in Afghanistan.

Massive open-ended contracts have been granted without competitive bidding or with limited competition to many of the same politically connected corporations which are doing similar work in Iraq: Kellogg, Brown & Root (a subsidiary of Halliburton), DynCorp, Blackwater, The Louis Berger Group, The Rendon Group and many more. Engineers, consultants, and mercenaries make as much as $1,000 a day, while the Afghans they employ make $5 per day.

These companies are pocketing millions, and leaving behind a people increasingly frustrated and angry with the results.

Instead of reprimanding these contractors for their poor work, USAID announced a new contract totalling $1.4 billion awarded to the joint venture of The Louis Berger Group, Inc. and Black & Veatch Special Projects Corp. on September 22.

"It's a shame that after the disasterous performance of Louis Berger in Afghanistan in the last five years, the company has been awarded with such a large sum of money. It's telling that the punishment for wasting millions of taxpayers' money can get you millions more from our government," Nawa said of the new contract.

Fariba Nawa, an Afghan-American who returned to her native country to examine the progress of reconstruction, uncovers some examples of where the money has (and hasn't) gone, how the system of international aid works (and doesn't), and what it is really like in the villages and cities where outsiders are rebuilding the war-torn countryside.

In Afghanistan, Inc., you'll get an inside look at a system gone out of control, with little accountability and plenty of opportunity for graft and abuse. It isn't a story you want to read; it's a story you must read.