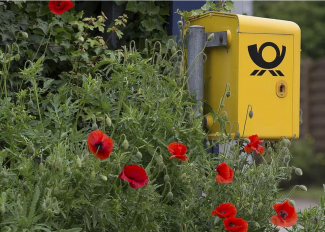 DHL agreed to pay $53 million to a group of rival shipping companies to taking part in a cartel to inflate freight forwarding surcharges to-and-from the U.S. It was fined £2 million when an employee was crushed to death at one of its depots in Milton Keynes, UK.

Individual Records & Summaries
Deutsche Post Violation Tracker Profile
Information in this section is drawn from the Violation Tracker database produced by the Corporate Research Project of Good Jobs First in Washington DC. It is the most comprehensive source of data on business violations of laws and regulations in the United States. For specific examples of misconduct, please click on the links.

How a Tax-Evasion Whistleblower Became One of Europe's Most Wanted

This post is in partnership with Worldcrunch, a new global-news site that translates stories of note in foreign languages into English. The article below was originally published in Süddeutsche Zeitung. 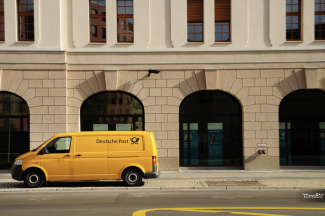 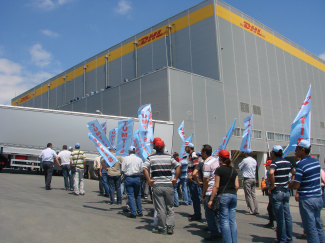 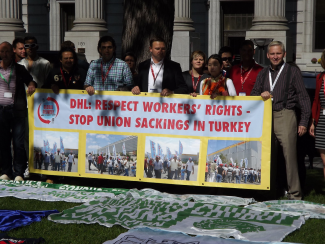 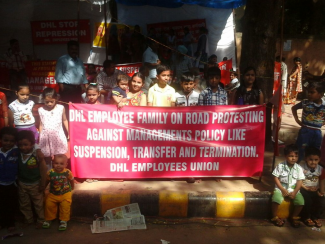 Justice for DHL workers in Turkey

The campaign for Fair Transport has scored a new victory. After months of dispute, DHL Express Turkey is finally willing to enter into negotiations with the workers’ representatives of the TÜMTIS union.

Since 2012 ETF/ITF Turkish affiliate Tümtis has been fighting DHL to get recognition, the first hurdle was taken in 2013 when after 476 days on the picket line, Tümtis was finally recognised after successfully organising DHL Supply Chain.

DHL workers in Chile have staged nationwide protests in support of their colleagues who have been laid off by the logistics giant.

Deutsche Post-DHL brings race to the bottom home to Germany

Worker Abuse at DHL is Unacceptable

Workers at Deutsche Post DHL are fed up. In several DHL locations the working conditions are considered poor, workers’ rights are not fully re-spected and unions aren’t recognised.

A protracted court battle may be coming to a close for hundreds of drivers who filed a misclassification suit against Exel Direct in 2012, a recent report said.

DHL has reportedly agreed to pay US$53 million to resolve a long-running antitrust class action lawsuit in the US by a group of shippers that accuse DHL and other freight forwarders of a historical conspiracy to fix international air freight prices and surcharges.

Aggressive and Unlawful: A Report into Deutsche Post DHL Operations in Turkey

For well over a year, workers at DHL Logistics in Turkey have been attempting to form a union. Click the second English link to view the follow up report 'Aggressive and Unlawful Revisited: DHLʼs Anti-Unionism in Turkey'

Deutsche Post DHL's Race to the Bottom: Ver.di fights back

A UK truckers’ union has criticised DHL Supply Chain for failing to ensure the safety of its drivers moving supplies around the country during the coronavirus crisis.

The fine was reduced by 1/3 for an early guilty plea and £100,000 in costs is to be paid to Milton Keynes Council after the death of an employee at one of its Milton Keynes depots.

Czech driver sues Deutsche Post. The case in a German labour court may be a breakthrough for many truckers.

German politicians and transport unions, “concerned” „about Eastern European drivers, push forward EU regulations to improve social conditions in transport. Meanwhile, companies such as Deutsche Post outsource deliveries to carriers from the East, although their drivers do not receive statutory compensation.

When the Postman Rings Twice

The government-owned German postal service is trying to push down wages through a new subsidiary that pays workers about 30 percent less than their peers.

Members of the DHL Employees Union in Delhi and their families are staging a family dharna (sit in) on 21 September, to protest against reported harassment and victimisation by the company.

An Atlanta jury has awarded $500,000 against a Westerville, Ohio-based warehouse and distribution company for failing to promote a female to a supervisory position, the U.S. Equal Employment Opportunity Commission (EEOC) announced today.

Subsidy Tracker is a project of Good Jobs First in Washington DC. It is the most comprehensive source of data on state and federal subsidies in the United States. For more details, click on the links.
Click here for details of subsidies received by Deutsche Post
Tax Havens

Italian tax police have seized assets worth more than 20 million euros ($24 million) from the local unit of logistics giant Deutsche Post DHL (DPWGn.DE) as part of a fraud investigation, a judicial document seen by Reuters showed on Monday.

Klaus Zumwinkel, the former chief executive of Deutsche Post, admitted today that he used a secret bank account in Liechtenstein to avoid paying about €970,000 in taxes.

German company’s acquisition strengthens its grip on European postal market and will put further pressure on Royal Mail in UK.