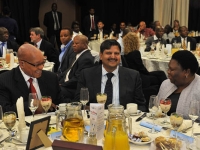 The South African government has intervened to support the Indian-born Gupta brothers, owners of a sprawling conglomerate with interests from mining to media, following a scandal that suggested that the brothers had accumulated so much power that they could dictate cabinet-level decisions in the country.

Over the last two years, the revelations of extensive business ties between the Guptas and the family of Jacob Zuma, South Africa's president and head of the African National Congress party, have caused the Economic Freedom Fighters (EFF) political party to describe them collectively as the 'Zuptas.'

"There is a significant level of corruption to undo political autonomy," EFF spokesperson Mbuyiseni Ndlozi told News24. "Our motto [remains] that Zupta must fall." The party even released a song titled "Zupta Must Fall."

The three Gupta brothers - Ajay, Atul and Rajesh - immigrated to South Africa in 1993 where they set up a company called Sahara Computers. Over the last quarter century, their holdings have expanded to include coal, diamond, gold, uranium and platinum mines; media outlets like ANN7 and New Age;  as well as VR Laser Services, a military manufacturing company.

At the same time the Guptas have become very close to the Zumas. Up until earlier this month, Duduzane Zuma, son of President Zuma, worked at Shiva Uranium, a subsidiary of the Gupta-owned Oakbay Investments. Duduzile Zuma, the president's daughter, was employed as a director of Sahara computers. And recently City Press revealed details of how the family helped bankroll the purchase of a house by Bongi Ngema-Zuma, the president's wife, in one of Pretoria's most expensive suburbs.

Allegations that the Gupta brothers had the power to influence decisions at the very top, have come from none less than Vytjie Mentor, a former member of  parliament, who declared on Facebook that the family offered her the job of minister of public enterprises.

The family also came under major attack when news broke that they had been given permission to land a plane at Waterkloof military air strip near Pretoria. The plane was carrying guests from India who had been invited to attend the wedding of Vega Gupta, a 23-year-old member of the family, at Sun City - the famous casino resort in the hills to the north-west of the capital.

The Guptas have consistently denied allegations of excessive influence, but in recent months they have been shunned by other South African businesses, causing them to reconsider their investments in the country.

Earlier this month, the family announced that they were relocating to the United Arab Emirates. "It is with deep regret that, following a period of sustained political attack on the Gupta family and our businesses ... we have come to the conclusion that it is time for the Gupta family to step down from all executive and non-executive positions," a letter released by the family said. "This follows the unexplained decisions by several of our banking partners and our auditors to cease working with us, and the continued press coverage of false allegations."

Less than three weeks later, the Zuma government dispatched the ministers of finance' mineral resources and labor to ask the banks to reconsider their decision.

"Whilst cabinet appreciates the terms and conditions of the banks' the acts may deter future potential investors who may want to do business in South Africa," Jeff Radebe, a senior cabinet member told the media.

The decision has provoked yet another outcry. "What more evidence do we need that the Gupta family controls the government?" Dennis Bloem, a politican with the Party of the People, said. "Instead of sending his minister to listen to the people who are crying out for help' Zuma has other priorities for them. The fact that his son is an affected party makes cabinet's decision unpalatable."