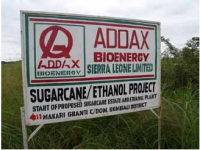 Addax Bioenergy, a Swiss energy company, is jeopardizing the livelihoods of thousands of subsistence farmers in order to export ethanol made from sugarcane grown in Sierra Leone, according to the Sierra Leone Network on the Right to Food (SiLNoRF) and Brot FÃ¼r Alle (Bread for All), an NGO based in Switzerland.

The Makeni project in the Bombali and Tonkolili districts of western Sierra Leone was initiated in 2008 on land acquired by Addax, a subsidiary of Oryx, an energy corporation founded by Swiss billionaire Jean Claude Gandur. Sugarcane grown on 10,000 hectares of land will be processed in a neighboring ethanol refinery and a biomass power plant to deliver a total of 100,000 megawatt hours of power for export to Europe once all the infrastructure has been completed later this year.

Addax has planted the fast growing sugar cane on large areas of productive land known as the bolilands even though it promised not to, alleges SiLNoRF's in its 2012 annual monitoring report. "[Addax] has taken away most of the bolilands and the people, they are saying that they have been stolen from them," Abass J. Kamara, programmes coordinator for SiLNoRF, told CorpWatch. (The company has a 50 year lease for a total of 57,000 hectares of land in Sierra Leone.

"Now I don't have a farm. Starvation is killing people. We have to buy rice to survive because we don't grow our own now," one community member told Canadian journalist, Joan Baxter at an April 2012 farmers' conference organized by SiLNoRF and Green Scenery, another Sierra Leonean civil society organization.

For Sierra Leone, a small West African nation that ranks as one of the poorest countries in the world, which is slowly emerging from a brutal civil from war that displaced about half of its population from 1991-2002, this issue of food security is a major national problem, according to the Oakland Institute, a U.S. based think tank.

The current government headed by President Ernest Bai Koroma has favored the introduction of industrial farming as a way to meet this challenge. For example, in 2009, the government created the National Sustainable Agriculture Development Plan (NSADP), to "increase the agriculture sector's contribution to the national economy by increasing productivity through commercialization and private sector participation."

The Makeni project, which has been touted as the country's 'flagship investment' for agricultural development, has received â¬142 million in loans from several European development banks such as the Netherlands Development Finance Company (FMO) and the German Development Finance Institution (DEG - Deutsche Investitions- und Entwicklungsgesellschaft mbH). Included in the list is the UK's Department of International Development (DFID) sponsored Emerging Africa Infrastructure Fund (EAIF).

In order to resolve the conflict with local farmers who have relied on the land for generations, Addax 'lured' community members into signing away their land to Addax with 'juicy' but non-binding promises to build schools, medical facilities, and community centers, alleges Bread for All. Kamara noted that the communities' right to "free, prior and informed consent" had been violated because Addax had only talked about positive changes, neglecting to mention any of the project's possible negative impacts.

Addax also set up an alternative farming mitigation project called the Farmer Development Program (FDP) but this has failed to provide adequate long-term food security for impacted farmers so far, according to a joint report by SiLNoRF and Bread for All published in September 2012.

A key stumbling block is the fact that farmers have to pay the full cost of seeds, harrowing, and ploughing on this new land after just three years which SiLNoRF says will be hard.

For example Kamara told CorpWatch that "farmers are confined to smaller portions of land and they are being encourage by Addax to use mechanized methods of farming like fertilizers and other pesticides and these people cannot afford to pay for them."

Although Addax pays compensation of $12 per hectare per year to many of the community members, an "Independent study report of the Addax Bioenergy sugarcane-to-ethanol project in the Makeni region in Sierra Leone" published by SiLNoRF says that this is not a "fair and adequate amount'" as it would not be enough to purchase a single meal in the province's regional capital of Makeni.

Responding to the publication of the SiLNoRF study, Addax said that it "vigorously contests the allegations contained in the strongly biased report which neither reflects the reality on the ground nor takes any notice of the unprecedented efforts deployed on the ground to engage with local communities and improve their daily lives."

NGOs blame the development agencies for having created this conflict. A report titled 'The Hunger Games' published by War on Want, a UK NGO, alleges that DFID has used taxpayers' money to support "land grabbing" in Africa by supporting big agribusinesses over millions of subsistence farmers, condemning the latter to poverty.

War on Want points out that DFID helped finance the creation of the Sierra Leone Investment and Export Promotion Agency (SLIEPA) in 2008, which has been aggressively promoting foreign investment" that has resulted in some 500,000 hectares of land being acquired by foreign corporations, according to SiLNoRF.

Addax is not the only company which has been accused of land grabbing in Sierra Leone. In the southern district of Pujehun, land disputes are also simmering between local famers and Socfin Agricultural Company Sierra Leone Limited, a subsidiary of Socfin Group which is majority owned by the French investment and holding conglomerate, BollorÃ© Group. Despite promised benefits, many families are vehemently opposed to the leasing of their farmland for rubber and oil plantations, according to Green Scenery, a Sierra Leonian NGO.