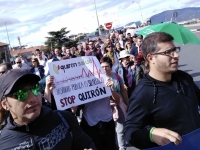 Just before midnight on September 23rd, 2021, Valentina died of a blood infection at the Materno Infantil de Málaga hospital, according to reports published on the website of ABC, one of Spain’s largest national newspapers.

The following week Valentina’s family brought a complaint of negligence against Quirónsalud and organized a protest to demand justice. "All we want to know is what happened to my granddaughter," Esther Beza, the baby’s grandmother told ABC.

Quirónsalud, apart from offering condolences to the family, refused to comment to local newspapers on the matter.

The complaint was not the first - similar charges have been brought against a few Quirónsalud hospitals over the years, according to the Asociación Víctimas de Negligencias Sanitarias (AVINESA).

For example, in 2016, the Quirónsalud San José clinic in Madrid was ordered to pay €1.1 million to a woman who sued the company for inadequate treatment during a 2008 pregnancy after her baby was born with cerebral palsy. And in 2020, a fine of €329,250 was imposed on Mapfre insurance for the death of a 49-year-old patient at the Quirónsalud-managed Jiménez Díaz Foundation hospital in Madrid after she was injected with a sedative during a shoulder operation.

These incidents are just the tip of the iceberg of complaints against 25 years of gradual privatization of heath sector services in Spain.

Civil society in Spain has become increasingly critical of the ever growing number of agreements between the public health system and private companies like Quirónsalud for medical services as well as an array of auxiliary tasks such as hospital catering, cleaning and laundry. Meanwhile these hospitals have gradually reduced medical staffing and increasingly transferred patients out of the public system to private clinics and hospitals at public expense.

Created from the merger of two Spanish private hospital networks (Grupo Hospitalario Quirón of Aragon and IDC Salud of Castile–La Mancha) in 2014, Quirónsalud, which is based in Madrid, now operates 54 hospitals and 111 different clinics, most of which are located in Spain. (It also owns a few clinics and hospitals in Colombia, Peru, Portugal and the United Arab Emirates.)

In 2016, Quirónsalud was acquired by Fresenius, a healthcare giant based in Bad Homburg, Germany, making Fresenius the biggest private healthcare provider in Spain. (Fresenius reported 2020 revenue of €36.277 billion with a global workforce of 311,269 in over 100 countries.)

Today Quirónsalud and Fresenius are among the biggest beneficiaries of a 1997 law that allowed regional governments to introduce privatization schemes into their local hospital systems. This has resulted in a mixed public-private health care system by which private insurance companies and hospitals are paid with public funds to offer faster care for simple procedures, effectively impoverishing the state system.

“Over the past decade, [Quirónsalud] has managed to create a healthcare network in parallel to the SERMAS [Servicio Madrileño de Salud] public network, feeding off Madrid’s population and professionals to build a booming and lucrative business,” writes Audita Sanidad, a group of Spanish citizens that evaluates public health sector spending and identifies illegitimate debt, in their latest report.

Today, healthcare workers say that Quirónsalud hospitals are chronically understaffed. "The lack of personnel to reduce expenses and increase profits means that, for example, in the intensive care unit, each nurse cares for three or even four patients, when in public hospitals the ratio is two," an organizer of a protest outside Quirónsalud’s Villalba hospital in Madrid told El País newspaper in September 2019. "Due to the lack of staff, the dinner trays go uncleaned all night until the morning shift begins. Newly qualified professionals attend up to 18 patients on each floor.”

The workers also say that Quirónsalud pays staff less and cracks down on unions. For example, nurses at Villalba say they are paid just €1,100 per month compared to the €1,500 that their publicly employed counterparts earn.

In 2019, workers spoke out against the firing of three healthcare workers who took part in union activities. Among them was Ainara M., a 25-year-old pediatric nurse. According to union organizers, Ainara was dismissed for standing up to Quirónsalud after she was appointed as a union delegate for the Health Workers Assembly Movement (MATS) in Madrid.

“This is just one more example of the harsh labor repression suffered by the Villalba hospital staff, by specifically firing those who lead the fight to improve their working conditions and rights,” Guillén del Barrio from MATS told El País newspaper. “This creates tension in workers and affects the quality of care. In the end, we all lose, workers and patients.”

Quirónsalud says that Ainara was let go for refusing to attend training in neonatology. (In response, Ainara told El País says that she never opposed the training but simply wanted to first make sure that her contract would remain the same.)

Similar complaints over working conditions have been voiced by workers at other Quirónsalud hospitals in Cádiz in southern Spain and even as far away as Cali, Colombia.

This past July, the Central Trade Union for Independent and Civil Servants (CSIF) reported that COVID-19 patients are having a hard time accessing care at the Campo de Gibraltar hospital in Cádiz, Spain, because Quirónsalud has failed to hire nurses and nurse assistants.

Likewise, the Independent Central Trade Union of Civil Servants (SINTRASASS) at the Imbanaco Medical Centre in Santiago de Cali, Colombia, says that the hospital has refused to guarantee workers’ rights after Quirónsalud bought the clinic last March. "We do not understand why the clinic refuses to guarantee stability and assure us that the benefits that we have today will be maintained over time,” Anderson Peralta, the president of the union’s regional board and a staff member at the clinic told Uni Global Union. “Our request is minimal after all the effort we have made during the pandemic.”

And the company aggressively pursues the government to pay it more. For example, in 2018, the Infanta Elena hospital sued Madrid for €40.1 million in extra payments for special drugs, biological therapies, oncological treatments, hepatitis treatments and others. The Superior Court of Justice of Madrid rejected the lawsuit.

But it’s not just the city: patients are also aggressively pursued for extra fees. During the COVID-19 pandemic in 2020, three Madrid hospitals managed by Quirónsalud - the Jiménez Díaz Foundation hospital, the Villalba hospital as well as the Rey Juan Carlos hospital – were accused of forcing chronic patients to pay to have their medicine delivered to their homes.

Diana, a patient with multiple sclerosis and regular patient at the Jiménez Díaz Foundation hospital, was billed €15 to have her monthly medicine delivered by courier. When she asked the medical centre if she could pick up the medicine at a local pharmacy, the hospital refused.

"This puts chronic patients in a situation of choosing to spend money, which is not always available, or going to the hospital and putting themselves at risk when the center itself warned us that it was better not to go and even canceled my routine check-up with the neurologist," Diana told El Diario newspaper.

Quirónsalud says that while the law requires that medicines be delivered to the patients, the company is not required to cover this cost. "The resolution does not say that the cost has to be assumed by the hospital," a company spokesperson told El Diario.

In addition to trying to squeeze out extra cash from patients and the city, MATS also says that companies like Quirónsalud seize the public funds meant for public hospitals.

“When the patient goes from a public hospital to another privately managed one, the money follows the patient, that is, the Community [of Madrid] pays money to the hospital for that captured patient,” José Manuel Freire, regional deputy of the Spanish Socialist Workers’ Party (PSOE) told MATS. “But when it's the other way around, the money doesn't follow the patient. Theoretically there is a billing, but the public hospital does not see that money. It is an asymmetric situation that favors patients going from public hospitals to privately run ones.”

Quirónsalud has also been criticized for failing to deliver the services it is required to provide under the law. For example, in 2017, two company hospitals in Madrid - the Jiménez Díaz Foundation hospital and the Infanta Elena hospital - were both accused of denying their patients treatment for hepatitis C, despite the Ministry of Health’s request to treat such patients.

Recent studies show that the overall Spanish healthcare system is suffering as a result of the 1997 reforms. "[The] private-public partnership model was shown to perform worse than the benchmark in 15 out of 26 indicators," write Nadav Davidovitch, Dani Filc and Alon Rasooly in the Israel Journal of Health Policy Research. "Other studies in Spain have found that private medical insurance allows high-income individuals to avoid waiting lists and receive fast-track consultations."

Citizens are fighting back. In 2016, Audita Sanidad demanded that the Community of Madrid provide full details of the payments it makes to companies like Quirónsalud and allow the citizens to have a say in how the money is spent.

And Ainara, the nurse fired in November 2019, has since sued Quirónsalud to get her job back. “Even if they put a million euros on the table, I will not give up. It is a matter of principles and ideology. I'm not going to stop,” she told El Pais.