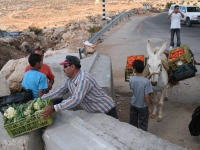 Jaffa oranges sold in European supermarkets labeled "Made in Israel" may have been grown and packaged in the occupied Palestinian West Bank, according to a report from the Boycott Divest Sanction (BDS) movement, an international coalition of Palestinian NGOs and activists.

The same month 16 Palestinian agricultural and civil society groups signed a statement calling for governments and retailers to take action against companies like Mehadrin that source produce from occupied lands.

Mehadrin operates at least three orchards in the West Bank, according to a map on the company website. This disputed territory is home to 2.7 million Palestinians many of whom lost access to their land as a result of confiscations and demolitions over the years: some 520,000 Israeli settlers have moved into 250 settlements in the West Bank since 1967. This process accelerated when Israel began construction of a 440-mile long (700 kilometer), 24-foot (7.2 meter) high "separation barrier" a decade ago.

According to the U.S. Campaign to End the Israeli Occupation, a human rights coalition, the Israeli settlements in the West Bank "are strategically located to disrupt territorial contiguity between Palestinian population centers, to control access to water aquifers, and to create enormous obstacles to the creation of a viable Palestinian state." Today, more than 60 percent of agricultural land in the West Bank is now effectively under Israeli military control, registered as "Area C" - "restricted military areas" or land earmarked for Israeli settlers.

Settlers are entitled to generous financial benefits including: grants covering up to 25 percent of the cost of establishing agricultural enterprises and tax reductions on profits of upto 30 percent, according to "Parallel Realities", a report by the Ma'an Development Center. Israeli companies are also exempted from paying the Value Added Tax for exports of fresh fruits and vegetables to the European Union. These companies, ironically, are one of the few sources of employment for Palestinian residents of the West Bank.

In 2010, researchers from Corporate Watch (a UK activist group separate from CorpWatch), saw grapes and dates grown in greenhouses and packaged for export in Beqa'ot (or Beka'ot) in the Jordan Valley, in the West Bank, loaded in Mehadrin boxes labeled "Product of Israel."

"As in all West Bank settlements, labour conditions for Palestinians working there are dismal," Therezia Cooper of Corporate Watch wrote at the time. "I interviewed four Beqa'ot workers on four different occasions, and they all told me that they have no contracts, get no health insurance and no payslips for their work."

Palestinian agricultural workers said that as contractors at Israeli settlements they make as little as $20 a day. On a return trip to the West Bank in 2013, Corporate Watch saw that Mehadrin was still mislabelling produce from Beqa'ot.

At Masua - another Israeli agricultural settlement - Corporate Watch found and photographed a Mehadrin sign with the "Jaffa" logo on a fence. Masua settlers have attacked the Palestinians living across the highway from the settlement, in the al-Jiftik village, according to Jordan Valley Solidarity, a network of Palestinian groups and international supporters.

Since the early 2000s Masua settlers have taken land from the Abu Al Ajaj farming area of al-Jiftik by fencing off areas to keep the villagers out, according to the October 2010 issue of the "Humanitarian Monitor" - a newsletter published by the United Nations Office for the Coordination of Humanitarian Affairs in the Occupied Palestinian Territories. The Israeli Civil Administration, which issued eviction and home demolition orders to Palestinian villagers at Abu Al Ajaj, claim that the land is categorized as Area C, ie owned by the state. The Masua settlers have since built greenhouses on that land and fenced off additional land that Palestinian farmers were using for farming and grazing livestock.

"By sourcing products from Massua [sic], Mehadrin is complicit in the annexation of Palestinian land by the settlers of Massua and in the policy of home demolitions which is aimed at the ethnic cleansing of Palestinians living in Abu al Ajaj," Corporate Watch wrote.

On February 12, in the West Bank and in Gaza, Palestinian farmers planted olive trees on farmland that had been bulldozed by Israeli troops as part of a demonstration to draw attention to the destruction of farmland. At the same time, in forty European cities, Palestinian activists and supporters held protests against Mehadrin outside supermarkets.

"We reject any suggestion that the reality that Palestinians are sometimes left with no choice but to export fresh produce through Israeli companies or work in illegal settlements is a reason not to take action to end international complicity in human rights violations," a joint statement issued by the 16 Palestinian NGOs said. "Helping us to break the chains of dependency by holding Israeli companies to account and working with us to export to world markets via socially responsible and law-abiding companies is the most honest and effective way to contribute to our struggle and our sustainable development."

Mehadrin has not commented on the boycott or responded to allegations of wrongdoing. It declined to respond when it was contacted last year by Richard Falk, the UN Special Rapporteur on Human Rights in the Palestinian Territories. Falk said he supported boycotting Mehadrin and other Israeli companies profiting from Israeli settlement enterprises.

Since 2009 stores in Britain have labeled products imported from the West Bank as either "Israeli" or "Palestinian." Last year, in response to pressure from its members, Co-op supermarkets - Britain's fifth-largest food retailer - stopped contracting with "any supplier of produce known to be sourcing from the Israeli settlements." In 2012, South Africa and Denmark also passed similar policies to deny "Made in Israel" labels to goods from the occupied territories.

On March 9, the Dutch government joined their ranks when it asked retail chains in the Netherlands to mark Israeli imports grown or made beyond the 1949 ceasefire line with labels reading "Product from Israeli settlement (West Bank/Golan Height /East Jerusalem)." The Netherlands is Israel's most important trading partner in the European Union.