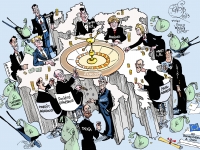 A new CorpWatch report shines a light on the role of six major banks in Greece, Ireland and Spain in the EuroZone crisis. "The EuroZone Profiteers" profiles Commerzbank, Depfa and Westdeutsche Landesbank from Germany; Credit Agricole and Societe Generale from France; together with Dexia - a Franco-Belgian financial institution.

There has been much debate among economists on how the creation of the Euro without supportive infrastructure like a banking union triggered the economic crisis in Europe. This report will add to that discussion by analyzing how these banks helped fuel the credit boom in the EuroZone before the property bubble burst, first in the U.S. and then across the Atlantic, leaving borrowing countries deep in debt

Over the last two decades, banks across Europe have come under increasing pressure to compete internationally - from bureaucrats like Mario Monti, the former by European Union Competition Commissioner, who mistakenly believed that greater efficiency would be the result. As Germany withdrew state guarantees for regional banks and France privatized nationalized banks, these banks took advantage of their high credit ratings to flock to countries on the periphery of the EuroZone with cheap and easy loans after the launch of the single currency.

Countries like Greece, Ireland and Spain who had struggled with high interest rates and unemployment for decades, jumped at this opportunity. The ensuing cash influx created an economic bubble characterized by a boom in risky public and private sector projects.

When borrowing countries were unable to pay back their debts, international lenders put the blame for the economic crisis on lazy workers, bloated social services, and unwise borrowings by foolish governments. In return for financial support, these lenders required that the borrowers impose 'austerity' which cut social-spending "luxuries" such as school books and subsidized health care in order to generate savings to pay off the loans.

"Wealthy countries and international lenders claim that the recent bailouts rescued rash and wasteful borrowers in Greece, Ireland and Spain. In reality, they were often repaying foolish loans that Belgian, French and German banks made in an effort to pump up their own profits which helped cause the crisis in the first place," says Pratap Chatterjee, executive director of CorpWatch. " 'The EuroZone Profiteers' is intended to raise serious questions about the role of European bankers and bureaucrats in bringing the EuroZone to the point of collapse."