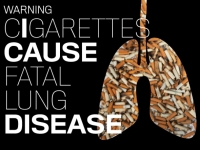 Big Tobacco is fighting a multi-pronged battle to defeat a global wave of laws to force them to use graphic warning labels and plain packaging. It has won a major legal battle in the U.S. this month but it has lost in Australia.

The FDA required companies to publish warnings from a series of advertisements that included pictures of a man with a hole in his throat, lungs stuffed with cigarettes and a dead body.

On the other side of the world, the Plain Packaging Act was enacted into Australian law in November 2011 could go ahead ordering the companies to use dull green standardized packaging with graphic warnings covering 75 percent of the front and 90 percent of the back of cigarette packets.

The Australian high court was circumspect in supporting the anti-tobacco legislation. "At least a majority of the court is of the opinion that the Act is not contrary to (Australia's constitution)," it ruled in a very brief statement on August 15.

U.S. courts ruled the other way, saying that the law violated free speech rights, in favor of a challenge brought by R.J. Reynolds (makers of Camel, Kool and Winston) Lorillard (manufacturers of Newport and Kent), and the Liggett Group (former makers of Chesterfield and Lark).

"This case raises novel questions about the scope of the government's authority to force the manufacturer of a product to go beyond making purely factual and accurate commercial disclosures and undermine its own economic interest," wrote U.S. judge Janice Brown in her ruling for the U.S. federal court of appeals in favor of the tobacco companies on August 24.

"(I)n this case, by making 'every single pack of cigarettes in the country (a) mini billboard' for the government's anti-smoking message," she added.

"In affirming summary judgment for tobacco companies, the court applies the wrong level of scrutiny, disregarding the tobacco companies' history of deceptive advertising," wrote judge Judith Rogers in dissent. "(T)he government's stated 'primary goal ... is to effectively convey the negative health consequences of smoking on cigarette packages and in advertisements.'"

Critics have pounced on the U.S. court ruling. "What is terrifying is not just the radical nature of the statement: that government can do nothing to combat the single greatest public health threat of our time," write Garrett Epps, a professor of constitutional law at the University of Baltimore, in the Atlantic magazine. "I yield to no one in my devotion to free speech. But a legal system that can't differentiate between political opinion and the sale of cigarettes has forfeited any claim to relevance to the nation it supposedly serves."

The U.S. case may go to the U.S Supreme Court.

Australian government officials celebrated the high court ruling against the companies. "This is a victory for all those families who have lost someone to tobacco-related illness," Nicola Roxon, Australia's attorney-general, and Tanya Plibersek, Australia's health minister, said in a statement. "No longer when a smoker pulls out a packet of cigarettes will that packet be a mobile billboard."

But the Australian act still faces legal battles. Philip Morris Asia, which recently moved its headquarters to Hong Kong, has now challenged the ruling at the World Trade Organization (WTO) under the 1993 Bilateral Investment Treaty between Australia and Hong Kong.

"(T)he almost comic attempt to get mileage out of the treaty (moving from Australia to Hong Kong in order to complain that it was being discriminated against because it was from Hong Kong) masks a broader, more serious attempt to turn trade treaties into instruments that allow corporations to sue governments," wrote Peter Martin in the Sydney Morning Herald. "The World Trade Organisation allows no such thing. Its disputes settlement procedure allows a nation to haul another nation before a disputes settlements panel, but not corporations to do so."

They are not the only ones - the Dominican Republic, Honduras and Ukraine are also taking Australia to the WTO.

The European Union and the United Kingdom are also currently considering similar rules on plain packaging and graphic warning for tobacco sales.