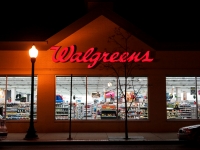 Walgreens, a major pharmacy chain in the U.S., has been sued by the state of Arkansas for failing to report large numbers of suspicious prescriptions of opioid medications. Arkansas is the latest of several U.S. states to allege that the company did not heed government warnings about the problem.

The company has become a key target of law enforcement officials for distributing 13 billion pills between 2006 to 2012, making it the largest distributor of such drugs in the U.S., and accounting for one in five prescriptions filled. Almost 500,000 have been killed in the last two decades from opioid overdoses in the United States alone, according to the U.S. Center for Disease Control and Prevention (CDC).

“Companies such as Walgreens should not be allowed to put corporate profits over the health and safety of Arkansans,” Leslie Rutledge, the Arkansas state attorney general, said in an official press release. “The impact of opioid abuse on Arkansans is disproportionately high compared to other states and though this lawsuit won’t be able to right all of the wrongs that have been done, it can bring desperately needed assistance to devastated families and communities.”

Opioids are a class of drugs that occur naturally in the poppy plant that are often used to treat chronic and severe pain. One example is opium which has been manufactured from the poppy seeds for centuries. Other opiates like heroin and morphine are made from the poppy plant while yet others such as codeine, fentanyl, hydrocodone, and oxycodone are synthesized in laboratories.

While some opiates are illegal such as heroin and hard to obtain, others can be easily obtained through a doctor’s prescription. “Chemically and psychologically speaking, there is very little difference between oxycodone, morphine and heroin,” Dr. Deeni Bassam, a certified anesthesiologist and pain specialist in the state of Virginia, explained in a documentary titled “Chasing the Dragon: The Life of an Opioid Addict.”

Opioid addiction often starts with prescription opioid pain killers. “The overprescribing is a lot of times where [the opioid addiction] begins,” Scott Reinhardt, the assistant special agent in charge of the U.S. Federal Bureau of Investigation office in Little Rock, Arkansas, told Arkansas Week, a PBS television show. “Most of the opioid drug addictions in particular start at home with friends and family and most of the time it’s somebody either sharing the medication or somebody using the medication. And what happens is the disease progresses.”

Arkansas citizens appear to buy an unusually high quantity of opioid drugs, according to the attorney general's lawsuit. In 2019, for example, 80.9 opioid prescriptions were dispensed for every 100 people living in the state, almost double the national average of 46.6, according to the CDC. Between 2006 and 2014, Walgreens distributed more than 142 million doses of oxycodone and hydrocodone in Arkansas.

Medical professionals say that this has led to a major crisis in the state. “[Prescription pain killers are] taking lives every day in many different ways. It’s ruining people financially, it’s ruining people’s health, people are dying”, Connie Philips, a director of the Springdale Treatment Centre in Arkansas, told KHBS television news.

The lawsuits against Walgreens suggest that there are reasons for the large orders of opioids – such as lax oversight by the pharmacy chain that allows the drugs to be bought in large quantities for resale elsewhere. While drugs in the U.S. are typically purchased from manufacturers by large scale wholesale distributors who re-sell them to individual pharmacies, chains like Walgreens bypass the wholesalers to save costs by buying large quantities of pills directly from drug manufacturers – and this makes them an easy target for black marketeers.

“This high volume of opioids alone should have alerted Walgreens to the fact that suspicious orders were being placed, as the amount of opioids that were sent into Arkansas far exceeded what could be consumed for medically legitimate purposes,” the Arkansas attorney general’s lawsuit alleges.

Walgreens has been in trouble with the law over opioid sales for a number of years. In 2006, the U.S. Drug Enforcement Agency notified Walgreens that company mechanisms for reporting suspicious orders of controlled substances like opioids at their Perrysburg, Ohio, distribution center, were “insufficient” and “inadequate.” (Perrysburg is one of Walgreens 12 major distribution hubs.) Two years later Walgreens’ own internal audit of the very same Ohio distribution center showed that the problem had persisted.

Similar major problems were discovered in other states. In 2010, a single Walgreens store in Oviedo, Florida, went from purchasing 80,900 oxycodone doses in 2009 to 223,500 in 2010 and 1,684,900 in 2011. “I don’t know how they can even house this many bottles to be honest. How do we go about checking the validity of these orders?” wroteWalgreens employee Barbara Martin in an email exchange with a Washington DC Walgreens employee.

In another internal email, Edward Bratton, a Walgreens manager of pharmaceutical integrity, suggested that the chain’s "runaway growth" in oxycodone sales could be explained by the fact that the company allowed drug sales “without limit or review.”

“To reiterate, my concerns with [Walgreen’s] distribution practices are not limited to the six [Florida] Walgreen’s pharmacies,” Michele Leonhart, a DEA administrator, wrote in a show cause notice served on Walgreens. "I find this to be a staggering disregard of Walgreens' obligations under the Controlled Substance Act."

In June 2013, Walgreens agreed to pay the DEA $80 million to drop the Florida investigation and associated lawsuit. The Walgreens distribution center in Jupiter, Florida, was also banned from selling opioids for two years.

But today, some eight years later, multiple states feel that Walgreens has continued to disregard the law. Florida and Kentucky sued Walgreens for causing and fueling the opioid crisis in 2018, Michigan sued in 2019, West Virginia sued in 2020 and Arkansas sued in March.

Walgreens denies that it is at fault. “Prescriptions are written by doctors based on their medical training, experience and clinical judgment, and when a patient presents a prescription that gives no reason to question its legitimacy, the pharmacist is obligated to fill the prescription exactly as written," the pharmacy chain claimed in a press statement.