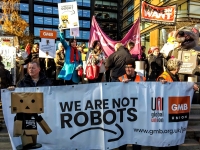 Why is this important? Amazon has over 800 warehouses across the U.S. and it employs some 800,000 workers who don’t have the ability to organize collectively for their rights.

“Amazon brags it pays workers above the minimum wage. What they don’t tell you is what those jobs are really like. And they certainly don’t tell you they can afford to do much better for the workers,” Jennifer Bates, an Amazon worker in Bessemer, told a U.S. Senate hearing last week. “We’re living paycheck-to-paycheck, trying to not just pay the rent or the mortgage, but we also have to live.”

The last time Amazon workers in the U.S. had the opportunity to join a union was in 2014. That vote involved a tiny group of 30 workers (out of 1,500) at the Middletown, Delaware, warehouse who were considering joining the International Association of Machinists and Aerospace Workers. The company hired an anti-union law firm Morgan, Lewis, & Bockius to successfully defeat that effort.

This time, Amazon has also pulled out the stops - hiring a consultant named Russell Brown who is paid $3,200 a day - to disrupt union organizers. Workers say that they have been lobbied to vote no via text message, Facebook pages, and even via signs in the toilets.

“It’s important that employees understand the facts of joining a union,” Heather Knox, an Amazon spokeswoman, toldthe New York Times in a statement. “We will provide education about that and the election process so they can make an informed decision. If the union vote passes, it will impact everyone at the site and it’s important associates understand what that means for them and their day-to-day life working at Amazon.”

But this time Amazon faces a much better organized group of workers who have drawn the support of celebrities like actress Tina Fey, actor Danny Glover and rapper Killer Mike.

A powerful video of workers at the plant posted on Facebook by A More Perfect Union, a new media start-up created by Faiz Shakir, former campaign manager for U.S. Senator Bernie Sanders' presidential bid, has even been tweeted out by White House staff and was given indirect support by newly elected U.S. president Joe Biden.

“Workers in Alabama – and all across America – are voting on whether to organize a union in their workplace,” Biden posted on Twitter on March 1st. “It’s a vitally important choice – one that should be made without intimidation or threats by employers.”

“We haven’t had this aggressive and positive of a statement from a president of the United States on behalf of workers in decades,” said Shakir.

The effort is beginning to snowball. “More than 1,000 Amazon workers from around the country have reached out to the RWDSU seeking information about unionizing their workplaces,” Chelsea Connor, a Retail, Wholesale and Department Store Union spokesperson, told the Washington Post.

Other unions are also taking advantage of the momentum. The International Brotherhood of Teamsters union told the Des Moines Register that it was working with over 400 employees at Grimes and Iowa City distribution centers in Iowa.

Not least, this election is being watched by unions around the world like the United Food and Commercial Workers in Canada, Vereinte Dienstleistungsgewerkschaft (Ver.di) in Germany, UNI Global Union in Italy and Spain, IndustriaLL in Switzerland, the GMB and the Trade Union Congress (TUC) in the UK, who have posted a steady stream of messages on Twitter to support the workers in Alabama.

“We send our solidarity to our sisters and brothers fighting for union recognition at Amazon in Bessemer, Alabama,” the TUC tweeted. “As 6000 workers cast their votes on union recognition – let’s remember in unity, there is strength. Power to the workers.”

The results of the vote will likely not be known till mid-April. But even if Amazon defeats the union, it is unlikely to shake the newly empowered powerful coalition of groups demanding answers and real change.

Senator Sanders, who is the chairman of the Senate committee that held the hearing last week, said he had a simple question for Jeff Bezos, the founder and CEO of Amazon, who refused to testify. “You are worth $182 billion, that’s billion with a B. You’re the wealthiest person in the world,” Sanders said. “Why are you doing everything in your power to stop your workers in Bessemer, Alabama, from joining a union so they can negotiate for better wages, better benefits and better working conditions?”