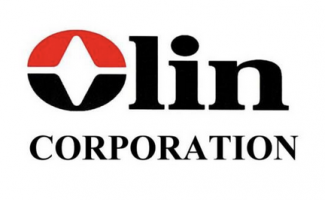 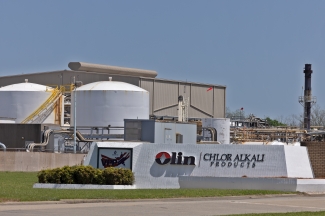 Olin makes ammunition and chemicals. Founded in 1892, it is now headquartered in Clayton, Missouri. It is the largest supplier of small caliber ammunition to the U.S. military and one of the world’s largest manufacturers of chlorine, used in disinfection and a key ingredient in plastics like polyvinyl chloride or PVC. Historically chlorine was produced using mercury membrane technology at chlor-alkali plants which resulted in highly toxic mercury waste that manufacturers dumped into local environment. For example, Olin bought the Mathieson Alkali Works, which was responsible for dumping 100 pounds of toxic methylmercury daily into the Holston River in Virginia in the first half of the 20th century. Olin has two major chemical manufacturing facilities in Louisiana’s ‘Cancer Alley’ – a major industrial zone where crude oil is turned into fuel, plastics and other petrochemicals. Olin’s chlor-alkali plant in Plaquemine, Lousiana, has had several major leaks of toxic chlorine notably in 2016 and 2022, which have forced local residents to seek medical assistance. Similar pollution charges have been made against the companies chlor-alkali plants in Alabama and Nevada.

Bullets have also provided a steady source of income to Olin during war. The company bought up the bankrupt Winchester company in 1931 and went on to sell 15 billion rounds of ammunition to the U.S. It also supplied the U.S. in the recent war in Afghanistan and Iraq. Olin was recently sued in New York for conspiring with four other companies to raise the price of industrial grade lye up to 13 times since 2015.

Individual Records & Summaries
Click here for violation data on Olin Corporation
Information in this section is drawn from the Violation Tracker database produced by the Corporate Research Project of Good Jobs First in Washington DC. It is the most comprehensive source of data on business violations of laws and regulations in the United States. For specific examples of misconduct, please click on the links.

Published by
Nola
| By
Mark Schleifstein
|

Dow Chemical's manufacturing plant in Plaquemine, on the west bank of the Mississippi River near

Published by
AL.com
| By
Associated Press
|

Residents of a Washington County town are complaining they were never properly notified of a chlorine leak from a chemical plant.

It's an incident that still has the McIntosh community reeling, unable to trust the chemical plant next door, who allegedly exposed them to chlorine gas without notifying them. 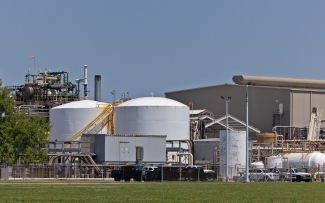 We, the undersigned, demand the Olin Chlor Alkali chemical plant located in the heart of Henderson, Nevada, be closed and the site be cleared of any toxic chemicals that have contaminated the area.

Government and internal investigations have been launched following a chemical leak Tuesday that sent two workers to the hospital and triggered a shelter-in-place order.

Union Defends Move To Stop Olin From Firing Employee. A union has told an Illinois federal court that Olin Corp. was just frustrated with an arbitrator's refusal to let the company fire an employee ...

Olin, Occidental Chemical, and three other top manufacturers of industrial-grade lye can’t dodge claims that they conspired on 13 separate price increases since 2015, a federal judge in Buffalo, NY, ruled.

The Olin Chemical Superfund Site (Site) is comprised of the 53-acre property at 51 Eames Street in Wilmington, Massachusetts (Olin Property or Property) and adjoining off-Property areas that have been impacted by contaminant releases from manufacturing and waste disposal activities formerly conducted at the Property.

An African American female alleges Olin Corporation discriminated against her by paying her less and promoting co-workers with less experience and qualifications.

Subsidy Tracker is a project of Good Jobs First in Washington DC. It is the most comprehensive source of data on state and federal subsidies in the United States. For more details, click on the links.
Click here for details on subsidies received by Olin Corporation
Tax Havens

Olin Corp. said on Tuesday it is shutting down some chlor-alkali production at its Plaquemine, Louisiana plant by June 1.