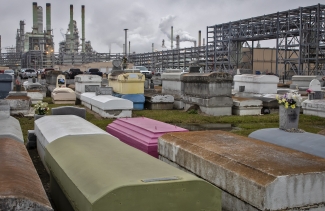 Marathon Petroleum is a fossil fuel company headquartered in Findlay, Ohio, that was created by the merger of three companies Marathon Oil (previously Ohio Oil Company), Ashland Refining and Tesoro Refining. The merged company is the largest producer of refined petroleum products in the United States, with 16 refineries across the country including the Galveston Bay Refinery in Texas and the Garyville Refinery in Louisiana’s Cancer Alley, two of the three biggest refineries in the country.* The Michigan and Louisiana refineries are located in major industrial zones with dozens of other polluting facilities and have been protested regularly by local communities who have suffered serious breathing problems and high cancer rates. In 2020, Marathon agreed to pay out $360,000 for air pollution at the Detroit refinery while several workers were hospitalized in a major explosion at the Garyville refinery in February 2022. Additionally the Texas City, Texas, refinery experienced a large oil leak from a storage tank as well as a hydrogen fluoride leak in 2021 that injured several workers.

In 2016 Marathon was fined $334 million by the U.S. Environmental Protection Agency and ordered to install modern upgrades to prevent air pollution and refineries in Illinois, Kentucky, Louisiana, Michigan, and Ohio, and $275 million over the same issues in 2001. Tesoro (which was a separate company at the time) was also fined $425 million for air pollution at its refineries in 2016. Marathon has also been fined $187 million for failing to pay transit fees for the Tesoro High Plains Pipeline that runs under the Fort Berthold Reservation in North Dakota. The company got the fine reduced to $3.9 million by the Trump administration but the local tribes continue to fight for a better settlement.

Individual Records & Summaries
Click here for violation data on Marathon Petroleum
Information in this section is drawn from the Violation Tracker database produced by the Corporate Research Project of Good Jobs First in Washington DC. It is the most comprehensive source of data on business violations of laws and regulations in the United States. For specific examples of misconduct, please click on the links.

When an Oil Company Profits From a Pipeline Running Beneath Tribal Land Without Consent, What’s Fair Compensation?

Published by
Inside Climate News
| By
Judy Fahys
|

Tribal landowners tried for years to get fair compensation for an oil pipeline that cuts across the Fort Berthold Reservation in North Dakota, only to see officials and the courts dismiss their concerns.

Published by
The Guardian
| By
Christopher Staudis
|

One morning in September, word of layoffs began to spread quickly through Marathon Petroleum’s refinery in the small industrial community of Garyville, Louisiana.

You, I and every other American taxpayer helped out Marathon Petroleum during the worst of the pandemic. Then, the same year it secured its $2.1 billion in federal tax benefits — the most of any U.S. oil company — Marathon let go almost 1,920 employees. 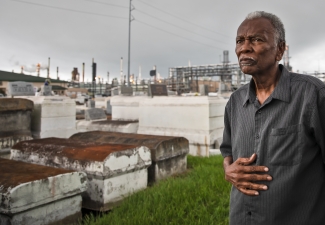 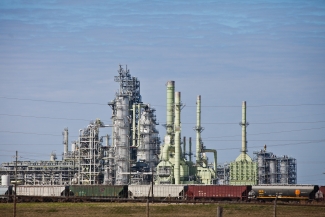 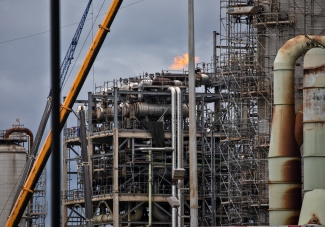 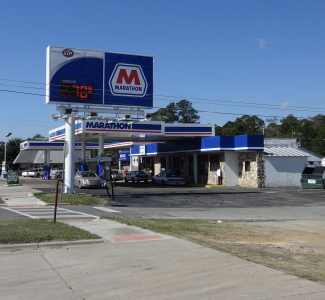 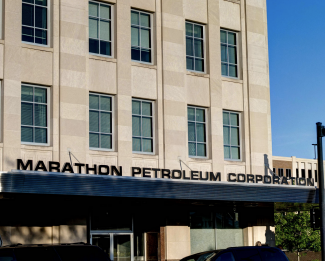 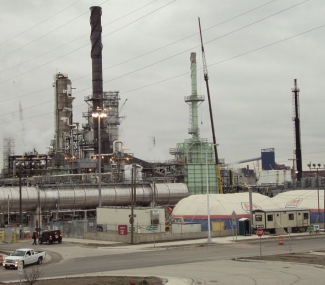 The 200 locked-out members of Teamsters Local 120 continue to win support and solidarity in their fight for safety against Marathon Petroleum refinery bosses here. Marathon is the largest oil refining company in the U.S.

A group called on the governor and state officials Friday to hold the owner of a southwest Detroit oil refinery accountable for emissions it puts into the air.

On Tuesday night, Marathon Petroleum and its surrounding neighborhood have a tentative deal in the dispute over noxious odors emitted into the air there.

Marathon Petroleum Corp is investigating what caused a toxic chemical release that injured two workers on Tuesday at a Texas City oil refinery, a spokesman said, as the U.S. industrial safety watchdog also began looking into the incident.

Most of the time, the phrase oil “spill” is a bit of an understatement. And that’s absolutely true of the Marathon Petroleum oil spill that happened in Texas City this week. A leak caused oil to cascade out of a storage tank, flooding the ground, shutting down a nearby road, and causing concern for locals and environmentalists.

A crude oil leak at a Texas City refinery has forced the closure of at least one road in the area.

The International Brotherhood of Teamsters Local 120 announced Thursday that their workers would be returning to the job, after members approved a six-year contract offer from the company.

Union workers who've been locked out of the Marathon Refinery in the south metro suburb since January say they're worried about potential safety hazards. In fact, a group of labor unions issued a report this week, sounding the alarm about replacement workers' lack of knowledge and experience.

A work stoppage at Marathon Petroleum's St. Paul Park refinery is entering its eighth week with no end in sight.

Subsidy Tracker is a project of Good Jobs First in Washington DC. It is the most comprehensive source of data on state and federal subsidies in the United States. For more details, click on the links.
Click here for details on subsidies received by Marathon Petroleum
Tax Havens

A state board deferred consideration of $43 million in tax breaks for Marathon Petroleum Friday after claims that the company falsified public records to avoid going to St. John the Baptist Parish officials for approval.

Fossil fuel companies have reaped millions of dollars in benefits from a stimulus package intended to help struggling Americans and the economy. Among these is Marathon Petroleum, the largest oil refiner in the country, which has a history of air pollution violations impacting low-income and Black and Brown communities.

U.S. refiner Marathon Petroleum Corp is delaying all maintenance projects at its 102,000 barrel-per-day St. Paul Park, Minnesota, refinery for 2020, a source familiar with the matter said, amid concerns related to the spread of the novel coronavirus.