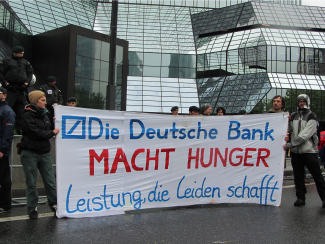 The 2008 financial crash revealed that bankers were well aware of the problems in the financial products they were selling – a trader at Deutsche Bank referred to low quality residential mortgage-backed securities as “pigs” and “crap.” Paul Mangione, a former Deutsche Bank executive, paid the U.S. $500,000 to drop a lawsuit over his role in marketing such securities.