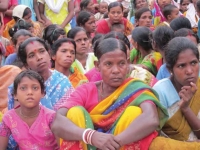 The World Bank has agreed to investigate Amalgamated Plantations Private Limited (APPL) in India for abusive working conditions on tea plantations in the north-eastern Indian state of Assam, following a formal complaint by workers. A Columbia Law School team has confirmed the workers allegations.

In 2009, the International Finance Corporation (IFC), an arm of the World Bank, invested $6.7 million into the newly created APPL to take over 25 plantations
from the Tata Group, a major Indian multinational. In return, the IFC
got a 19.9 percent in the new entity while Tata kept 41 percent
ownership. The 31,000 workers on the plantations were allowed to buy
shares in the new company at Rs 10 ($0.20) per share.

The APPL holdings number among the roughly 1,000 Assamese tea plantations that were established on tribal lands during the days of the British empire and now supply one sixth of the world's tea supply. To this day the workers on many tea estates are the direct descendants of the families whose land were taken to create them in the first place and who live in a relationship of total dependence on the plantation with little intervention by the state.

All told, tea estates in India employ some one million permanent workers and another two million temporary workers, making the industry probably the largest private sector employer in the country. For Tata, a company that has managed tea estates since India's independence from Britain, however, the major profits lay in marketing tea, rather than growing it.

The IFC saw the plan as an opportunity to pioneer a new system of worker ownership. At the time that the IFC made the investment, the Washington DC based multilateral bank sent staff to visit three plantations to check if the new company was in compliance with Indian laws as well as World Bank standards for environmental and social sustainability. The IFC staff issued an assessment that was "positive without reservation."

Over the last three years, Columbia Law School teams visited 17 of the plantations to investigate actual working conditions. Their final report titled: "The More Things Change...': The World Bank, Tata and Enduring Abuses on India's Tea Plantations" was ready for publication in January.

"The IFC failed even to note the appalling living conditions that plague tea plantations generally, and are immediately visible to anyone visiting worker residences at APPL estates," the Columbia report states. "On every plantation visited, workers showed researchers dilapidated homes lacking protection from rain and wind, each dwelling often housing the families of several workers."

Healthcare for workers and their families - required under the law - was either denied and sometimes workers were even allegedly abused at the hospitals. At least two workers died on the job - Gopal Tanti, a 25-year-old pesticide sprayer, who collapsed and died on the job on May 28, 2010, and Raimati Majhi, a 55-year-old worker, who died in December 28, 2011.

To make matters worse, workers say that APPL has been expanding into new production sectors like fisheries by seizing the little land that the tribals were left in the 19th century to grow subsistence crops to support themselves.

The Columbia researchers also say that APPL management told them not to
trust what workers said because they 'had low IQs' and were 'just like cattle.'

"Had the IFC done its homework," says Sarah Mechlovitz Saadoun, a Columbia student involved in the field research, "it would have recognized the huge gap between the claims of the company and the actual conditions for workers."

"Worker ownership and diversification - the most highly vaunted elements of the transition - are obviously appealing," says Ashwini Sukthankar, who co-directed the research. "But the implementation was so outrageous that it casts doubt on the sincerity of the project."

"The IFC acted with an excess of enthusiasm and an absence of attention to the known problems in the plantation sector," added Peter Rosenblum, a law school professor who oversaw the student research.

Columbia agreed to delay publication of their report last month while APPL and the IFC looked into the matter. Meanwhile workers from tea plantations in Nahorani, Majuli, and Hattigor, supported by Accountability Counsel, an NGO in San Francisco, filed a formal complaint with the IFC's Office of the Compliance Advisor/Ombudsman (CAO) on February 2nd. Nine days later, the CAO agreed to pursue a formal investigation, and the Columbia report was released the following day.

"We appreciate the considerable work done by the research team on the challenges facing the tea industry in India," wrote the IFC in a press statement. "We are reviewing their findings together with APPL and will take into account their recommendations as we continue to work to improve conditions on the ground."

The company has defended the working conditions. "Wages are paid as per
industry agreements," Kaushik Biswas, an Amalgamated spokesman told
Agency France Press by email. "Cash wage plus benefits total up to 189 rupees (US$3) per man (a) day."

Following the release of the Columbia report, the media has begun to visit APPL's plantations where they have interviewed workers who confirmed the findings. "When big people come to visit, they give [protective masks] to us," Raju Mantra, a plantation worker, told the New York Times. "But then they put it back in storage, saying that if we wear it every day, it will wear out."

In many way the abusive condition are not atypical, say the Columbia researchers. "The abusive conditions for APPL workers are consistent with conditions
in the sector as a whole," the report says. "They are
rooted in the colonial origins of plantation life which continue to
define extremely hierarchical social structure, the compensation scheme,
and the excessive power exercised by management."

Nor is this the first time the World Bank been accused of ignoring blantant human rights abuses in as many months. Just last month, CAO completed an investigation into a $30 million loan to CorporaciÃ³n Dinant in Honduras in 2009 for a palm oil plantation project despite an escalating conflict that has resulted in the killing of at least 19 local farmers. CAO confirmed that World Bank officials should have raised serious questions about human rights abuses before committing the money, but did not recommend canceling the project.