Why Instagram Has Become a Powerful Marketing Tool for Drug Pushers 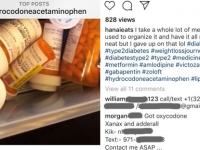 "There’s no doubt that social media has made it easier to buy drugs. The risk is that people think it’s safer than buying drugs from a street dealer," Andrew Horne, director of Addaction, Scotland’s biggest drug and alcohol charity, told the Sunday Mail newspaper. "In reality, drugs are often mislabelled and there’s no easy way to tell the purity of what you’re buying. This makes it really hard to safely manage how much you’re taking.”

Instagram, which allows users to display pictures accompanied by a paragraph of text, is favored by drug dealers for several reasons: First; the social media site best known for selfies and following the latest pop stars; attracts over a billion users a month which is three times more than Twitter that has 335 million active users a month.

Second, Instagram has one of the most powerful search functions of the social media landscape that allows users to narrow searches by location as well as by “hashtags” (words with a # in front of them such as #adderall❤️, #mdmapills, #oxycontin and #painkillersplease), that allow peddlers to market drugs in their neighborhood simply by using the right word combination on a post with their location.

Third, Instagram has done relatively little to check the proliferation of programs (known as “bots”) to create anonymous Instagram accounts or hashtags that can replace a banned account or hashtag with a slightly different account name or hashtag.

Finally, any Instagram user can easily post comments on anyone else’s public Instagram feed, allowing them to comment on users posts that are innocently posting about prescriptions given out after medical procedures for example.

A related issue is the aggressive public advertising deluge by pharmaceutical companies such as Purdue Pharma, manufacturers of Oxycontin, to make prescription-only drugs appear less dangerous than traditional drugs like heroin and opium, which has had the effect of making them socially acceptable, despite their equally damaging potential for addiction and overdose deaths.

Warnings about this problem are almost as old as Instagram itself. (It was founded in 2010.) "Illegal Internet pharmacies have started to use social media to get customers for their websites, which can put large, and especially young, audiences at risk of dangerous products, given that the World Health Organization has found that over half of the medicines from illegal Internet pharmacies are counterfeit,” Hamid Ghodse, the president of the International Narcotics Control Board (INCB), wrote in the board's 2011 annual report.

Last June, Eric Feinberg, the founder of an artificial intelligence company called Global Intellectual Property Enforcement Center, ran a search for drug advertisements on Instagram. He quickly found lots of pictures of drugs with multiple hashtags and contact information via other social media tools like WhatsApp. Feinberg also discovered that once he actively followed a few drug pushers, Instagram quickly started to suggest others users or hashtags to follow, because of the internal algorithms that social media companies use to try to keep users on their sites.

“Just as drug use rewires the brain to crave more of the substance, social media platforms have designed their sites in such a way that after a single search for an illicit drug, the algorithm gets rewired to advertise drugs to the already vulnerable user,” Rick Lane, a Washington DC lobbyist who came to prominence for his efforts to fight sex trafficking, told the Washington Post.

Instagram says it has addressed the issue by banning abusive accounts and hashtags.

“Obviously, there is some stuff that gets through that is totally against our policy, and we’re getting better at it,” said Carolyn Everson, the vice president for global marketing solutions at Facebook, Instagram’s parent company, told the Post. “We’re not yet sophisticated enough to tease apart every post to see if it’s trying to sell someone illegal drugs or they are taking Xanax cause they are stressed out.”

But a quick search easily proves that social media companies efforts to remove or block posts containing illicit advertising have been temporary at best. On October 4th, 2018, my search through Instagram yielded a very small amount of posts containing drugs (a few posts from 2015 appeared to have slipped past an algorithm designed to target such posts) as well as many of the hashtags associated with them that were seemingly banned.

Two weeks later, on October 22, 2018, at 11:45am, I conducted another search for adderall. This time, accounts and hashtags like #adderall❤️ were easy to find. Many of the posts showed the picture of drugs placed on a small index card or piece of paper with contact information written down in handwriting to prevent artificial intelligence security from detecting them. As of late June 2019 similar posts were still accessible.

Additionally multiple dealers had posted contact info for buying prescription-only drugs in the comments section of posts by users who were writing about their struggles with addiction to medicines.

In September 2018, Instagram claimed to have initiated a pop-up window that would be triggered when drug terms are searched to direct users to a page where they could seek help for drug abuse. My own attempts to trigger this pop-up window have repeatedly been unsuccessful, however.

Not surprisingly, many critics say that the social media companies are moving too slowly, and choosing profits over people's livelihoods. Joe Manchin, a U.S. senator from West Virginia, called social media companies “reckless,” saying: “It is past time they put human life above profit and finally institute measures that crack down on these harmful practices, preventing the sale of illegal narcotics on or through their platforms.”

While Instagram seems to have a strong handle on preventing posts involving nudity and associated hashtags, it is true that finding a solution to drug advertising might be harder given the very nature of social media promotional algorithms.

Drug policy advocates also caution that a full scale crack down could also have the unintended consequence of shutting down those posting about or referencing drugs as a form of addiction recovery. “The digital world can be an indispensable source of ongoing fellowship. It’s also a great place for people in recovery to be of service to others still struggling or just beginning to look for help,” Jeremiah Gardner, a counselor for chemical dependency at the Hazelden Betty Ford Foundation, told the Minnesota Star Tribune. “It’s just starting to be studied, and early research validates that this can be effective.”