US: FBI Probes Explosion in West Virginia Mine

The Federal Bureau of Investigation is conducting a criminal probe of
the deadly explosion at a Massey Energy Co. mine in
West Virginia in early April that killed 29 miners, according to people
familiar with the matter.

The FBI wants to find out whether certain safety devices and
procedures were bypassed or tampered with, among other things, the
people said.

Massey Energy said Friday it was aware that FBI investigators were
interviewing witnesses and that it would cooperate with the
investigation. "Massey has no knowledge of criminal wrongdoing," the
company said in a statement.

A spokeswoman for the Justice Department declined to confirm an
investigation related to the April 5 accident. 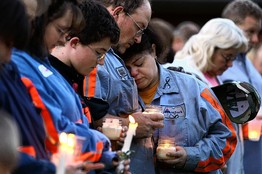 Separately,
lawyers representing families of miners killed in the accident said
Massey Chief Operating Officer Chris Adkins had offered a settlement of
$3 million to each of a number of families. "My understanding is it's
been rejected by everyone, and I think rightly so," said Randolph
McGraw, who is representing several families. A Massey spokeswoman said
the company "has been having private discussions with family members and
out of respect for their privacy will keep them confidential."

Federal regulators have said they believe the Upper Big Branch
explosion was caused by high levels of methane, a colorless, odorless
gas found naturally in coal seams that can become explosive at high
levels. High levels of coal dust, which can lead to bigger explosions,
were also believed to be a factor.

Investigators are believed to be looking at whether certain safety
devices, such as methane and coal dust monitors and ventilation
curtains, were disabled, and are conducting interviews with former and
current workers, according to people familiar with the matter. Kevin
Stricklin, of the Mine Safety and Health Administration, said in the
days following the accident that it wasn't clear why methane monitors
didn't signal a problem and that the monitors should cut the power to
mining machines once dangerous concentrations are reached.

J. Davitt McAteer, a former federal mine safety official who has been
appointed by W.Va. Gov. Joe Manchin to investigate the accident, said
in an interview that he would focus on that question.

Mr. McAteer declined to speculate on whether such tampering took
place. But he said that the magnitude of the explosion, including the
distance it traveled inside the mine to kill many miners instantly,
indicated the accident was an "engineering failure" rather than a lapse
committed by one or two miners.

Massey Chief Executive Don Blankenship said in a recent interview
that "there's no issue about any methane monitoring that I'm aware of"
at the mine and that "in fact I believe that we carry extra methane
monitoring that's not required." Mr. Blankenship said that a "skilled
electrician or technician" would be able to disrupt methane monitors,
perhaps to keep machinery operating. "I can't sit here with certainty
and say what thousands of people are doing every day," he said.

Some current and former Massey miners said safety devices, such as
methane monitors and ventilation curtains, were disabled at times.

Chuck Nelson, a former miner who worked at a different Massey mine
from 1994 to 2000, said the foreman would hang monitors that registered
coal dust in the fresh air entry to keep readings of potentially
explosive dust low. Mr. Nelson said that in other cases he was told to
tuck a dust monitor into his work shirt to keep the readings low. "You
had to do these things, or else you didn't have a job," he said.

A current Massey worker, who worked at the Upper Big Branch mine but
now works at another Massey mine, said that when ventilation curtains
fell to the ground, miners who were under pressure to keep mining coal
typically failed to put them back up. "We don't normally do that," said
the miner. "There's so much tedious work in making sure the ventilation
is right, it's unreal."

Mr. Blankenship dismissed claims of violations. "Any time you have a
tragedy of this size, you're going to hear about anything," he said. "I
think it's important to hear what the facts are."

Criminal investigations involving coal mining accidents are rare but
not without precedent. Criminal charges were filed following a 1989
explosion at a Kentucky mine that killed 10 miners, and also following
the 1991 death of two miners at a West Virginia mine.

Two years ago, a Massey subsidiary pleaded guilty to 10 criminal
charges, including willful violations of mandatory safety standards
resulting in death, after a 2006 fire killed two miners. The company
paid $2.5 million in the criminal case and $1.7 million in a civil case.
The combined amount was the most paid in a coal mining death, according
to the Mine Safety and Health Administration.