Published by | By
Pratap Chatterjee
| Monday, May 24, 2021
Tags: Environment
Image 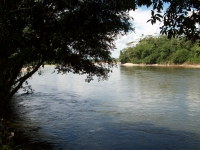 There are only 2,600 members of the Siona peoples, who live in the Buenavista and San Jose de Wisuya reservations that straddle the border of Colombia and Ecuador, hunting and fishing on the banks of the Putumayo, a tributary of the Amazon. Their land was torn apart by the decades long war between the M-19 guerrillas, the Fuerzas Armadas Revolucionarios de Colombia (FARC) and the Colombian military. The area was also a major target for the United States anti-drug Plan Colombia that involved aerial spraying of local villages with toxic pesticides.

Back in 1998, Ram Petroleum, a company based in Toronto, Canada, drilled for oil in the area but abandoned the project after spending $5.5 million on an exploratory well. In 2014, Amerisur, a UK-listed company, returned to the area to negotiate with the indigenous community for permission to drill. Just over a year ago, Amerisur was acquired by GeoPark for £242 million.

Amerisur claims they have an agreement with the local community but the tribe says that this is not true. "In 2014, when Amerisur first arrived, we told them no,” the indigenous community wrote in a public letter. "Today, after Amerisur sold their interest in the oil underneath our land to the Chilean company GeoPark. We say no again."

“The trees, the water, the air … That’s life for us,” Pablo Maniguaje, a Siona elder, told the Guardian newspaper. “What else is there?”

The Siona are especially worried that exploration will bring a return to conflict. “Guerrilla, paramilitaries, army … they’d all enter,” Placido Yaiguaje Payaguaje, another Siona member told the newspaper. “That’s not what we want. That’s why we’ve said no to the seismic.”

On April 21, GeoPark signed a deal with UNDP to implement a Comprehensive Economic Recovery Strategy in the departments (an administrative division similar to a state or province) of Casanare, Meta and Putumayo, in return for a $1.7 million payment to the inter-governmental agency.

“This strategic partnership will allow us to integrate GeoPark’s experience in the area with our comprehensive development solutions to accompany neighboring communities in their socio-economic recovery,” Javier Perez Burgos, a UNDP manager, said in a press release. “In this way, we advance in closing human development gaps, we make sure that no one is left behind and we support the private sector in fulfilling the 2030 Agenda.”

Five days later, the indigenous community sent an angry letter to UNDP. "Can the United Nations support human rights defenders with one hand, while receiving money from an oil company with the other?" wrote Andrew Miller of Amazon Watch.

At first the United Nations tried to defend the collaboration. "The oil companies are operating in the Amazon anyway, and we can help make sure they abide by human rights standards," Jessica Faieta, the head of UNDP in Colombia, wrote back.

A day later she backtracked. “We have decided to suspend the activities of this project in the municipality of Puerto Asís to learn more about your concerns and to share with you the scope of UNDP's actions envisioned for the territory," she wrote in a letter dated April 28.

On May 17, the Siona joined three NGOs (Amazon Watch, Amazon Frontlines and Healing Bridges) to send a follow-up letter to UNDP. “We demand that Jessica Faieta … publicly apologize to the Buenavista Reservation for having ignored their struggle to defend life, territory, and dignity, giving preference to interests that pollute the territories, destroy the Amazon, and put at risk the life of the communities,” they wrote.

This is not the first time that GeoPark has fallen afoul of indigenous communities in the Amazon. Back in 2013, the company entered into an agreement with PetroPeru, to explore for oil on the Lot 64 concession in Loreto, Peru, on the land of the Achuar and Wampís indigenous peoples in Peru. The communities sued the company and launched a campaign to defend their land. In July 2020, Geopark withdrew.