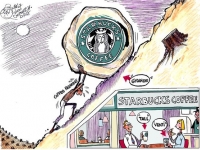 Starbucks, the world's largest coffee shop chain, and the Ethiopian government are on the verge of unveiling a deal that the company hopes will end attacks on the company's carefully constructed ethical image.

Starbucks spokesperson Bridget Baker told CorpWatch that "a licensing, distribution and marketing" agreement for three of Ethiopia's specialty coffees would be announced later this month.

If the company recognizes Ethiopia's decision to trademark the three coffees, it would represent a significant climb-down for the multinational corporation that claims to sell "Coffee that Cares."

Starbucks change of mind would also represent success for an international campaign by Oxfam, a British-based not-for-profit organization. More than 93,000 people signed on to its call for Starbucks to complete an agreement with Ethiopia.

An academic at the University of Oxford's SaÃ¯d Business School joined the attack with a stinging criticism of the company's stand, accusing it of hypocrisy and questioning its much-proclaimed social responsibility policies.
Starbucks executives - running an ambitious global expansion plan that aims to increase the number of the company's coffee houses from 13,700 in 39 countries to 40,000 globally - were also aware that other companies, such as Green Mountain Coffee Roasters ("Fair Trade and Organic"), were cooperating with the Ethiopian initiative and winning praise for "exemplary" behavior.

What the Ethiopians have demanded is Starbucks' support for the country's innovative plan to trademark three of its coffees - Harar, Sidamo and Yirgacheffe. Until now, the world's largest specialty coffee retailer has resisted the move, arguing instead for certification of bean names. Trademarking, say critics, would give power to growers; certification, they argue, is toothless.

The dispute sounds technical, but at root the controversy is about trying to close the gap between the $4 a Western consumer may pay for a cappuccino and the 50 cents a day earned by a laborer on an Ethiopian coffee farm (or on farms elsewhere in the world: see Brazil box).

Every penny counts, for individuals (an estimated 11 million Ethiopians, about one-fifth of the population, depend on coffee for their livelihoods) and for the nation (coffee provides two-thirds of the country's export earnings).

"Coffee is part of our culture", says Ato Getachew Mengistie, director general of the Ethiopian Intellectual Property Office and the driving force behind the trademarking and licensing initiative. He is not exaggerating: coffee probably originated in Ethiopia (though Yemen claims it, too) and the traditional coffee ceremony is a respected ritual steeped in symbolism.

But as U.S.-based human rights organization Global Exchange points out, despite coffee's ranking as the world's most valuable traded commodity after oil (about 500 billion cups drunk a year), many small coffee farmers toil in "sweatshops in the fields", earning less than the costs of production, forced into a cycle of poverty and debt.

But, as with most commodities, the big profits accrue to the retailers and traders, not to the farmers. In the words of coffee economist Stefano Ponte in a BBC World Service program this week, "Coffee itself is only a small ingredient in the price of a cappuccino. We're also buying the cup, the comfortable chair, the background music, the magazines: the total coffee drinking experience."

What's missing from the equation is "the total coffee farming experience". Two developments are trying to rectify the omission: the "fair trade" movement and specialty coffees. The former sets out to give farmers a higher, guaranteed price for their products; the latter earn a premium for quality and distinctive taste.

Enter Starbucks, founded in 1971 by two teachers, Jerry Baldwin and Zev Siegel, and writer Gordon Bowker. They modeled it on a little espresso* bar in Berkeley, northern California, named Peet's Coffee and Tea, founded by the son of a Dutch coffee dealer who had migrated to the U.S.

The migrant's bar has become a global force. In April the company announced a 20 per cent increase in revenue for the latest quarter to $2.26 billion (with a similar increase forecast for fiscal 2007), and an 18 per cent increase in profit for the second quarter of the year, to $151 million.

Its brand has been built not simply by chairs, music and magazines, but by providing a feel-good factor for consumers through its Fair Trade associations, its own C.A.F.E. (Coffee and Farmer Equity) guidelines "to evaluate, recognize, and reward producers of high-quality sustainably grown coffee", and even by acquiring Ethos water ("helping children around the world get clean water and raising awareness of the World Water Crisis".)

But when Mengistie came up with his trademark plan, Starbucks resisted. Douglas Holt, L'OrÃ©al Professor of Marketing at the SaÃ¯d Business School, University of Oxford, claimed the company went further, and was instrumental in the U.S. National Coffee Association's opposition to the move.

Holt charges Starbucks with working with industry lobbyists to pressure the U.S. Patent and Trademark Office to turn down Ethiopia's trademark applications, of snubbing attempts by Ethiopian officials to broker an acceptable agreement and launching a media counter-offensive to the Oxfam campaign, publicly scolding Ethiopia's efforts.

"Just as consumers were disgusted by the fact that Air Jordans sold for $120 while Asian laborers produced the shoes in what amounted to slave labor conditions," Holt says on his website, "they will be equally disturbed by the fact that Starbucks is happy to sell coffee for $26/lb while refusing to allow the coffee's producers a shot at climbing out of desperate poverty."

Coffee historian Antony Wild, author of "Coffee, A Dark History", told CorpWatch that the proportion of the price of a cup of coffee is so small that even if farmers received 1,000 per cent more, the price in the coffee shop would rise only 5 per cent.

Ron Layton, a Washington DC attorney with the organization Light Years IP, who has been working with the Ethiopians on the coffee scheme, commented: "It's all a question of power-play."

Layton says that quality coffees - which he compares to fine wines with their own flavors and tastes - are coming into their own, but that producers have not gained much from them. His organization suggests about 45 per cent of the high prices charged by retailers of gourmet coffees should be returned to growers: Ethiopia receives around 6 per cent.

Trademarking could change that (which is why the Ethiopian experiment is being watched by other producers, and other commodities, around the world). Layton estimates that it could earn Ethiopia an extra $88 million a year - a significant gain for a country the United Nations Development Programme ranks as the eighth poorest in the world.

Tadesse Meskele, head of the Oromia Farmers Union, is also happy. He believes the new arrangement will boost premium coffee prices from $1.60 a pound to $4, meaning a better return for growers and more money for laborers.

Meskele features in a film, Black Gold ("expose the truth behind your coffee cup"), which he screened for British members of parliament before he met Prime Minister Tony Blair in London earlier this year. Starbucks has shown its nervousness, and perhaps a lack of deftness in its public relations, by attacking the film and issuing a statement to the company's employees and the media criticizing it as "inaccurate" and "incomplete".

Filmmakers Nick Francis and Marc Francis have expressed "surprise that Starbucks have gone out to discredit the film again. This is not a film specifically about Starbucks, it's a film about the winners and losers in the global coffee industry and it shows the daily reality for millions of coffee farmers.

"We spent six months during the production trying to persuade Starbucks to participate in the film to give them the opportunity to explain how they buy their coffee and how they work in Ethiopia, but they declined our invitation."

Similarly, the company failed to respond to any of my requests for comments when I was writing this article. In the midst of the dispute, a Starbucks news release said it paid an average of $1.28 per pound for its coffees in 2005 - 23 per cent above the average New York price in the same time period.

Additionally, it said it had increased its Ethiopian coffee purchases by nearly 400 per cent between 2002 and 2006, invested in social development projects and provided access to affordable loans in coffee growing regions.

At around the same time Starbucks chief executive officer Jim Donald flew to Addis Ababa to meet Ethiopian Prime Minister Meles Zenawi to refute the allegations of bullying and accusations that it was blocking Ethiopia's trademark initiative.

Does this month's announcement of "agreement in principle" between the company and the government - to be followed by a full agreement later in May - mean recognition of trademarking?

Holt is cautiously optimistic: "We would want to wait until we see the final agreement later this month to make a right judgment. It sounds good. They had been under pressure and promising better behavior and that just might have happened. They had messed up several times and I think I'll take them seriously this time. "

(* espresso: a concentrated drink brewed by forcing hot, but not boiling, water under high pressure through finely ground coffee)

This article was made possible by a generous grant from the Hurd Foundation.