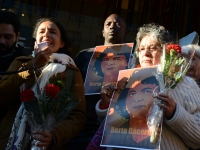 Roberto David Castillo, former CEO of Desarrollos Energéticos Sociedad Anónima (DESA) in the Honduras, has been convicted of the murder of Berta Cáceres, an activist who was fighting the Agua Zarca dam on the territory of the indigenous Lenca people, five years after she was killed in March 2016.

But while international observers have hailed the court decision as proof that the Honduran justice system is working, the Atala Zablah family, who allegedly helped orchestrate the killing, have neither been charged nor appeared in court. Nor have the complaints that Cáceres filed before her death, to overturn the alleged fraud in awarding the dam permit, been resolved.

“It isn’t over,” the Council of Indigenous and Popular Organizations of Honduras (COPINH), which was founded by Cáceres, said in a statement. “We demand the immediate cancellation of the concession over the sacred Gualcarque River of the Lenca community and the prosecution of everyone involved in its illegal and corrupt concession. We demand the dismantling of the criminal networks that persist and acted during the trial to promote impunity.”

DESA was awarded a permit to build the $50 million 22 megawatt dam in 2011 on the Gualcarque River with initial funding from the World Bank and Sinohydro of China. Construction began in 2012 and access to the river was cut off soon after, heavily impacting the local community who considered the river sacred, in addition to depending on it for food and water.

The following year, Cáceres and COPINH, organized a successful road blockade of the dam area that brought construction to a halt. In 2015 Cáceres was awarded the prestigious Goldman Environmental Prize for her efforts.

Company and government officials were furious and pursued the organizers relentlessly.

A week after Cáceres held a press conference to denounce those who wanted to kill her, she was murdered in her house in La Esperanza.

Over the last five years, seven men have been convicted of the murder including Sergio Ramón Rodríguez, a DESA engineer, and Douglas Geovanny Bustillo, the former head of DESA's private security team. Castillo is the eighth person to be convicted.

Castillo, a 2004 graduate of the United States Military Academy West Point who served in the Intelligence and Counter-Intelligence Department of the Honduran Armed Forces, was in regular communication with members of the powerful Atala Zablah family about Cáceres and COPINH, in the months before her death, according to messages extracted from their phones by the Honduras Public Prosecutor’s Office.

Three members of the family have been implicated in a chat group named “Seguridad PHAZ” (which stands for “Agua Zarca Hydroelectric Project Security"): Jacobo Nicolás, José Eduardo and Pedro Atala Zablah – who also happen to be the main shareholders of Las Jacarandas, the company that owns majority of DESA’s shares. José Eduardo also sits on the board of the Central American Bank for Economic Integration which lent $24.4 million to build the dam.

“It’s them or us,” Pedro Atala Zablah wrote to the group on October 11, 2015. “Let’s send a message that nothing will be easy for those SOBs.”

Pedro is the brother of Camilo Atala, owner of Grupo Financeiro FICOHSA and the wealthiest banker in Central America, who has allegedly helped finance the project, according to investigative reporter Nina Lakhani.

Other messages from phones belonging to the DESA executives together with location analysis directly link them to the men who carried out the killing.

Two days before Cáceres was killed, Daniel Atala Midence, the chief financial officer of DESA and another member of the family, made a payment of $1.254 million to PEMSA S.A – a company managed by Castillo, according to documents uncovered by COPINH. Eight months later, Castillo bought a luxury 5,034-sq-foot five-bedroom, five-bathroom detached home in Houston, Texas.

While the Atala Zablah family has not been put on trial, another key case has been winding its way through the Honduran courts. In March 2019, the Special Fiscal Unit Against Corruption and Impunity (now known as UFERCO) filed an injunction against 16 former government officials over the granting of licenses issued to DESA. Last December the Constitutional Court released 10 out of the 16 while charges against the others are still ongoing.

The charges brought by UFERCO show that Castillo was working simultaneously for DESA as well as National Electric Energy Company (ENEE), which granted the license for the dam construction. With access to confidential government documents, DESA was able to submit fradulent bids and even negotiate a higher price for future electricity sales.

ocal activists say there is no question as to who is ultimately responsible. "I want it to be absolutely clear," Padre Melo, a local Jesuit priest and radio journalist told the New Yorker magazine in 2016. “The government of Juan Orlando Hernández is responsible for the death of Berta Cáceres.”

“We have nothing to thank the justice system for. It was they who persecuted Berta; they criminalized her and displaced her. This victory is a result of our militancy,” Victor Fernández, a lawyer for the Cáceres family, said. “Their (the community activists) audacity, determination and dignity to resist, defend and triumph over this corrupt system sets a precedent.”