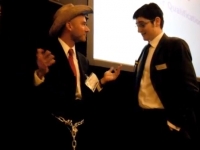 A climate change activist locked himself to a projector screen at an oil and gas conference in Texas today interrupting a TransCanada executive who was making a presentation on a pipeline from Alberta to the U.S. Instead 300 astonished attendees heard an impassioned presentation about TransCanada's poor safety record.

Tom Hamilton, TransCanada's manager of compliance and quality, had just begun his talk at Pipe Tech Americas 2013 conference at the Woodlands Waterway Marriott Hotel in Houston. All of a sudden he was upstaged by Ramsey Sprague, an organizer from Texas with Tar Sands Blockade, who sneaked into the conference wearing suit and tie and a cowboy hat to convey a message about the safety lapses and the environmental impact of the Keystone tar sands pipeline that Hamilton works on.

Sprague locked himself to the audio visual equipment and then proceeded to tell the executives at about how his group had photographed daylight coming through holes in welds connecting segments of the actual pipeline during a protest in Winona, Texas, last December. (The pictures were taken by three activists who locked themselves inside the pipeline) While conference security officials attempted to unlock him, Sprague took advantage of the time to address the audience.

"TransCanada's safety record is beyond deplorable. Their wanton disregard for the health of our communities is demonstrated by their countless toxic tar sands spills," Sprague told the assembled industry executives. "Toxic tar sands extraction should not be allowed to continue." (Watch the video of Sprague's speech here)

Tar sands are thick, sticky, oil-bearing clay-like deposits (the industry term is oil sands) that are laboriously extracted from locations like Alberta's pristine boreal forests and then processed into crude oil for gasoline. (Other major deposits are found in countries like Saudi Arabia and Venezuela)

Between two and four tons of tar sand and two to four barrels of water are needed to produce a single barrel of oil, which ultimately releases three times more carbon dioxide than typical oil production.

Canada is already the U.S.'s largest petroleum importer, shipping roughly 2.2 million barrels a day - much of which is from tar sands. The Keystone XL pipeline will carry an additional 1.1 million barrels of crude oil extracted from Alberta 1,700 miles to refineries in the U.S. Gulf Coast, where it could then be processed for export overseas.

But the pipeline has been delayed for four years pending approval from the U.S. State Department which has final say because it crosses the international border. The State Department announced last week that it was pushing back the release of its environmental review one more time to the beginning of April.

"We don't anticipate being able to conclude our own review before the end of the first quarter of this year," said Victoria Nuland, a spokeswoman at the State Department said at a press briefing.

Last year, Obama denied a permit for the pipeline's construction, in part due to concern about the potential damage to the Oglalla aquifer in Nebraska, which is an important source of water for Great Plains states. But he allowed TransCanada to reapply for a permit for an alternate route. He also allowed for TransCanada to begin construction on the southern section of the pipeline last August.

The fate of the Keystone pipeline could make a significant difference in the development of Canada's tar sands industry, according to Canadian energy think-tank, Pembina Institute. Earlier this month it released a new report, "The climate implications of the proposed Keystone XL oilsands pipeline."

"TransCanada's Keystone XL pipeline from the oilsands to a new market on the U.S. Gulf Coast is the most significant proposal awaiting approval," the report stated. "Other alternatives to ship oilsands to the west or east coast of Canada will, for the short to medium term, play a less dominant role in accelerating oilsands development. These other proposals are smaller in pipeline capacity than Keystone XL, are in the very early stages of development, or face major public opposition."

Indeed prospects to open up other markets for tar sands oil are looking grim for Canada. So far, the European Union (EU) has not been swayed by intense lobbying from oil companies and the Canadian government to retract a proposal to label oil from Alberta's tar sands as highly polluting and energy-intensive.

Another roadblock for the tar sands industry is the plummeting price of oil created by massive expansion of fracking - an equally controversial drilling technology to extract natural gas - in the U.S.

"Oil sands projects display some of the highest break-evens of all global upstream projects," energy industry research firm, Wood Mackenzie, said in a June 2012 report. "The potential for wide and volatile differentials could result in operators delaying or cancelling unsanctioned projects."

Adding to the tar sands industry woes is a growing movement of climate activists with groups like 350.org and Tar Sands Blockade taking to the streets with increasingly creative protests and civil disobedience tactics. In November 2011, 12,000 people surrounded the White House in a peaceful protest.

Beginning in August 2012, 29 activists blocked construction of the Keystone XL pipe in Texas for months, by chaining themselves to machinery and staging tree-sits. TransCanada claimed that the actions cost the company millions in profits in a lawsuit against the activists, seeking $5 million in damages, but agreed to settle out of court last week. The activists have agreed to stay off Keystone XL property in exchange who had little choice unless they wanted to face punishing sanctions.

"This is a David versus Goliath situation, where an unethical, transnational corporation is using its weight to crush First Amendment rights of people speaking out," said Lauren Regan, an attorney with the Civil Liberties Defense Center who represents the activists.

Today's conference protest, however, does not appear to violate the agreement, and suggests that more creative disruptions are to dog the tar sands industry.

Environmental groups also plan to gather again in Washington, D.C. on February 18 (a federal holiday named President's day) to ask Obama to say no to the Keystone XL pipeline.