Syngenta Withdraws From Mediation Over Toxic Pesticide Use in India 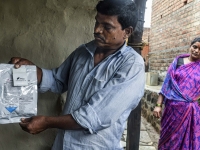 “The farmers and their families are severely disappointed and distressed in the absence of a tangible outcome after making painstaking efforts over four years to reach this international forum,” said Dewanand Pawar of the Maharashtra Association of Pesticides Poisoned Persons (MAPPP) in a statement.

MAPPP was established after 800 cotton farmers suddenly fell ill – and 22 died - in Yavatmal in the state of Maharashtra in late 2017. The farmers shared one thing in common – they had used a pesticide mixture that contained Polo, whose active ingredient is diafenthiuron, which has been banned for 20 years in the European Union because of its toxicity.

Syngenta, a pesticide manufacturer based in Basel, Switzerland, continued to make and export Polo to other countries, despite the European ban (and a 2009 ban on the use of diafenthiuron in Switzerland). The biggest buyer is India, which imported 75 tonnes of Polo in 2017, almost 60 percent of Syngenta's sales that year. 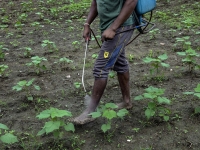 A Maharashtra government investigation conducted in Yavatmal suggests that the unusual weather conditions of 2017 may have played a role. An exceptionally dry summer caused the cotton crop to grow an extra 18 inches (45 centimeters) taller than usual (the normal height is 54 inches or 135 centimeters) forcing famers to raise pesticide spraying equipment over their heads as a result of which they may have inhaled more of the toxic mixture than usual. Humidity levels during the spraying season were also 10 percent higher than normal, causing the farmers to sweat more and allowing the pesticide to spread further on their bodies.

Syngenta denies that it was at fault. “We strongly condemn the various salacious and incorrect reports alleging that our crop protection product Polo was responsible for the unfortunate incidents. There is absolutely no evidence to suggest that Syngenta’s product Polo, was at all responsible for the incidents that have occurred,” the company said in a statement at the time.

But a 2018 report commissioned by Public Eye, an NGO in Switzerland, says that their on-the-ground interviews and investigations suggest otherwise. Among others, they interviewed a survivor named Sumesh Kanande, a 38 year old cotton farmer from the village of Lomi, who fell unconscious after spraying pesticides for three days and had to be rushed to the Government Medical College & Hospital in Yavatmal, the main hospital in the region.

Public Eye also interviewed Haribhau Kumbhekar, another farmer from the village of Bhari, was admitted to the hospital after spraying the pesticide mixture for 12 days in a row. Both men had to be tied to their beds because they became violent and tried to rip out the intravenous drips that they were being given in the hospital.

Unsure of what was affecting the farmers at the time, the doctors at the Yavatmal hopsital gave all the farmers atropine, which is used to treat cases of poisoning by organophosphate pesticides. Unfortunately, the medication might not have been effective because diafenthiuron is not an organophosphate, but it does have multiple side effects like agitation, hallucinations, delirium, cramp and coma, which many of the victims suffered.

After the report was published, a group of the victims worked with the European Center for Constitutional and Human Rights, MAPPP, Pesticide Action Network Asia Pacific, Pesticide Action Network of India and Public Eye to file a complaint against Syngenta with the Swiss National Contact Point, a government agency established under the Organisation for Economic Co-operation and Development (OECD) Guidelines for Responsible Business Conduct.

“Syngenta is responsible for what my family and I had to endure, We deserve to be compensated for what we have been through,” Hiramam Sayam, one of the farmers who filed the petition said in a statement. “In total, I spent 25 days in hospitals. But I still feel sick. I have problems speaking and cannot work in the fields like I used to.” 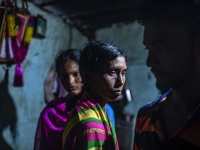 Other plaintiffs include Geeta Shankar Aglawe and Geeta Bandhu Sonule, both of whom lost their husbands to the poisonings. “My husband worked hard to provide for our family and give our sons a good education,” Aglawe said in a statement. “His death could have been prevented. That’s why I and my family demand justice.”

In December 2020, the Swiss National Contact Point accepted the complaint and held four mediation meetings in 2021 between the farmers, the NGOs and Syngenta.

Meanwhile, a different group of farmers from Yavatmal chose to sue Syngenta in the civil court of the canton of Basel-Stadt with the help of Silvio Riesen, a partner at Schadenanwälte, a Swiss law firm specializing in liability and insurance law.

In June 2022, Syngenta decided to withdraw from the Swiss National Contact Point mediation, arguing that it could not discuss whether Polo has caused the poisonings because of the lawsuit in Basel-Stadt canton. “Mediation can have a chance of success only if both parties have a fundamental interest in reaching an amicable solution and do not seek to use the process exclusively for other purposes,” the company said in a statement.

Syngenta’s decision has also been condemned by international experts. “The group of 51 farmers and their families should not be deprived of their right to access remedy through a non-judicial process simply because another group of victims chose to file a civil lawsuit”, Marcos Orellana, the United Nations Special Rapporteur on Toxics and Human Rights, said in a statement. “This is setting a bad precedent that underscores the weaknesses of national contact points for the OECD Guidelines.”