Suez Canal Aftermath: Time to Question the Environmental and Social impacts of Our Megaship Mania 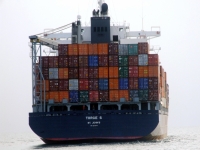 Much has been written about the economic risks of megaships (think accidents and piracy leading to trading losses, inflation and oil price rises etc.) but perhaps more pressing, are their environmental and social impacts.

One of the leading experts on the unseen costs of global shipping is Olaf Merk, a Dutch political scientist who is in charge of the work on ports and shipping at the International Transport Forum of the Organisation for Economic Co-operation and Development (OECD) in Paris.

“The large majority of the goods we consume are now moved by a handful of very large global shipping companies that source their workforce from developing countries and register their ships in tax havens,” he wrote in a recent OECD article. “These companies have accumulated as much debt as a mid-size country, they emit as much CO2 as a big country, and have difficulties to be profitable except in the most bullish of times.”

The impetus for building these megaships (that are almost as long as four soccer fields placed end to end) is globalization – garments sewn in Bangladesh from cotton grown in Egypt sold in cities from Los Angeles to Tokyo and Paris; oil drilled in Nigeria that is sold in Texas; and pianos made in China that are sold in London.

The Ever Given has a capacity of carrying 20,124 shipping containers – a mind-boggling number given that container ships were limited to carrying 5,000 containers each just two decades ago. (A container can carry enough to fill a three bedroom U.S. apartment.) Today over 180 megaships carry in excess of 15,000 containers each and some 50 more such ships are on order to be built over the next few years, according to industry newsletters like gCaptain and Maritime Executive.

These orders are to be filled by China State Shipbuilding Corporation, Jiangnan Shipyard and Yangzijiang Shipbuilding in China; Imabari Shipbuilding (which built the Ever Given) and Japan Marine United Corporation in Japan; Daewoo, Hyundai and Samsung in South Korea.

Merk’s team at the OECD recently published an excellent study that showed that the registration of these vessels in tax havens like Liberia, Marshall Islands and Panama by the global shipping trade had caused governments to forego between $38 billion and $69 billion in potential revenue between the years 2005–2019. The biggest culprit is the cruise industry which pays zero taxes. Container ships pay close to 19 percent. The countries with the lowest tax rates are in North America while the highest rates are in Asia. (The OECD study made a strong case for imposing a global minimum tax on the industry to solve this matter.)

Working conditions and wage abuse aboard cruise ships, cargo ships and especially fishing vessels is also a subject that is rarely reported on. An outstanding book (that spawned an NGO) that exposes the conditions that migrant workers from countries like Bangladesh, Indonesia and the Philippines labor under is The Outlaw Ocean by Ian Urbina. "Routinely they would work for months, sometimes years, being told that their wages were being sent to their families electronically, only to eventually be left ashore where they then found out that none or a mere fraction of their wages were actually ever transmitted,” Urbina told Oceana website.

“These workers are captive through debt-bondage, through their reality of being so far offshore and by so few inspections or law enforcement. They are held captive through violence and sometimes actual chains. We’ve profiled, for example, one worker who was shackled by the neck when he was not fishing,” he added.

The coronavirus pandemic has exacerbated this. Indeed, in September 2020, some 400,000 ship workers were stuck on the high seas today, unable to return home, according to the International Maritime Organization. "Not knowing when or if we will be returning home brings a severe mental toll on my crew and myself," Captain Hedi Marzougui of Hapag-Lloyd said at a recent United Nations event. "I would encourage each and every one of you to think of how you would feel, if you had to work every day, for 12 hours, with no weekends, without seeing your loved ones, and trapped at sea. Now add that you have to do that with no idea of when you will be repatriated."

Then there is the environmental impact of dredging rivers and sea ports to allow these megaships to pass. Biologists, environmentalists and fisherfolk say that these projects disrupt fragile ecosystems that have supported coastal communities for centuries. Take the Panama Canal that was expanded in 2016 at a cost of $6 billion despite the fact that studies suggest there is a long term cost from the introduction of invasive species as well as the possibility of destroying Lake Gatun, the country’s main source of fresh water.

In Panama, opposition was muted because of the significance of the canal to the national economy but even in other countries, activists have by and large lost the debate on port dredging in cities like Melbourne, Australia, and Hamburg, Germany, where courts have rejected lawsuits to stop these expansions. (The Blue Wedges coalition in Australia was defeated in 2009 and a lawsuit brought by German river and coastal fishermen as well as the towns of Cuxhaven and Otterndorf was defeated in 2017.)

But to this day, activists continue to push back around the world, to stop the expansion of ports from Setúbal in Portugal to Makassar on the island of Sulawesi in Indonesia.

Finally, there is the environmental cost and working conditions under which these ships are broken up for scrap when they reach end of life. The biggest shipbreaking yards are in South Asia: Alang in India; Chittagong in Bangladesh; and Gadani in Pakistan.

The International Labour Organization summed up the problem thus: "Shipbreaking has grown into a major occupational and environmental health problem in the world. It is amongst the most dangerous of occupations, with unacceptably high levels of fatalities, injuries and work-related diseases."

In Chittagong alone, an estimated 216 workers in the shipbreaking yards have died of injuries suffered in the workplace in the past 15 years. Leigh Day, a law firm in London, recently made a major breakthrough when it convinced Britain’s Court of Appeal to allow a widow to sue a UK ship owning company over husband’s death when he fell off the Ekta, a 300,000-tonne super-tanker that was being dismantled at the Zuma Enterprise ship-breaking yard on Sitakunda beach.

An NGO that has been shining a much-needed spotlight on this industry is Shipbreaking Platform in Belgium. The organization just revealed that two ships – the Marco Polo and the Magellan of UK-based Cruise & Maritime Voyages – are currently sailing illegally to Alang, with an allegedly high quantity of asbestos in their structures. All together at least 24 passenger ships have been sold for scrap in the last 14 months because of pandemic-related economic woes, according to Shipbreaking Platform's research.

Yet despite the non-stop media coverage of the Ever Given’s plight, the opportunity to examine these key issues of environmental and social justice in the global shipping industry has been completely ignored.

Instead the focus has been getting back to business as usual – and the news that the ship was finally freed was greeted with jubilation. "We were able to get out of a very tight jam,” Mohab Mamish, a former Suez Canal Authority chairman told Agence France Presse news agency: “I am well and truly overjoyed."

The latest news update is that Evergreen Marine (operators of the Ever Given) has just confirmed an order for not one, not two, not a dozen, but 20 more megaships with Samsung Heavy Industries. Meanwhile Yangzijiang Shipbuilding has an order for a megaship that will carry a staggering 24,000 containers and Hudong-Zhonghua Shipbuilding Group has just unveiled designs for a 25,000 container vessel.

But change may yet come. New coalitions to fight the impact of global shipping are springing up such as Global Cruise Activist Network that came together last year, to protest the environmental and social impact of mass tourism.

“We oppose the return of a ‘business-as-usual’ cruise ship industry,” Jane da Mosto of Venice, Italy, said in a press release when the network was launched last year. "The Global Cruise Activist Network is calling for an equitable and responsible system of leisure travel that optimizes economic benefits to all stakeholders, while eliminating the negative social, public health, and environmental impacts of cruising on port communities, workers, and passengers."

“Our members have been able to support fellow activists in demanding additional noise restrictions, better understand how ports and cruise terminals are being financed; share what works for community-led air and water pollution monitoring; learn from locations dealing with referendums and legal actions; and track where and when cruise ships are returning,” said Karla Hart of Juneau Alaska, one of the organizers of the network.