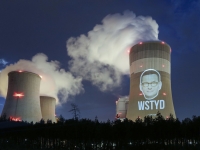 A storm is brewing over the coal mines and power plants operated by Polska Grupa Energetyczna (PGE) in Poland – notably over the Turów complex in Lower Silesia, close to the border of the Czech republic and Germany, as well as over the Bełchatów complex in the Łódź region.

Polska Grupa Energetyczna (PGE) is jointly owned by the Polish state together with several big institutional investors like the Aviva group and the Nationale-Nederlanden group. (The Polish government owns a controlling 57.39 percent stake in PGE.) Bełchatów and Turów are two of PGE’s biggest assets, which together supply a quarter of the power consumed by the 38 million residents of the country.

On May 21, the European Court of Justice ordered that Turów be shut down immediately because water pumping at the giant open pit coal mine has caused groundwater depletion across the border in the Czech republic as well as subsidence in the German city of Zittau. Less than three weeks later, Łódź authorities agreed to close the Bełchatów power plant by 2036 and its mines by 2038, in order to get a slice of Europe’s €17.5 billion Just Transition Fund, which provides aid to coal-dependent regions if they commit to a carbon neutral future.

Both decisions are fiercely opposed by Polish trade unions who staged a major rally of 4,000 workers in Warsaw, two days after the Łódź announcement. "This is a warning for the European Commission: take your paws off the Polish economy and Polish workers," Solidarność trade union leader Piotr Duda told the BBC. "We live in a nation state and we are not a colony of the German state."

Solidarność, the powerful trade union that helped liberate the country from Soviet rule, is backed by the government of Poland which has vowed to fight Brussels on these matters.

The unions argue that coal has been central to the Polish economy for centuries. At the time of the fall of the Berlin Wall in 1990, Poland boasted 70 coal mines that employed some 400,000 miners, although over the last three decades, these numbers have dwindled to about 20 mines and less than 80,000 workers. But PGE still operates Bełchatów, the largest thermal plant in all of Europe and the most polluting.

The company says it is being unfairly singled out. “Much larger brown coal mines operate in close proximity in Czechia and Germany,” Wojciech Dąbrowski, president of the board of PGE, said in a press release. “We comply with EU environmental directives, adapt our power plants and mines to increasingly stringent standards, operate on the basis of a legally granted license, and all our activities are lawful. I have repeatedly emphasized that a rapid departure from coal is not possible for technical, economic and, above all, social reasons.”

But environmentalists say that the company and the unions need to wake up to the reality that coal mining and power need to be phased out. “PGE has spent years denying the reality of coal’s flailing prospects, and fighting those seeking to clean up our air and protect our climate and water,” Zala Primc, a campaigner at Europe Beyond Coal, told Emerging Europe news.

“The wind is changing – when you see Europe’s biggest coal operation heading into retirement, it’s clear an era has ended,” Ilona Jędrasik, fossil fuel infrastructure lead at ClientEarth’s Warsaw office, told Euronews. “The most important thing now is to secure a realistic future for those who have been employed by the coal industry up until now, and to plan for a low-emissions future. The Polish government owes this to Polish people and to Europe.”

Stuck in between the two sides are the Czech villagers near Turów whose ground water has been severely depleted by the coal mining.

"There is one common well in our village and all the houses are connected to it,” Milan Starec, who lives in the Czech village of Uhelna, told the BBC. “If the water disappears from this well then our village will dry out in one moment, because we have no other possibility to get water.”

"The groundwater level started to fall again, with the total decrease reaching some 60-70 metres," Ondrej Nol of the Czech Geological Survey told France 24. “This decrease is attributed purely to the influence of the Turów mine.”

Meanwhile, the Czech government has petitioned the European Court of Justice to impose a fine of €5 million on Poland for every day that the mine stays open, until it is willing to negotiate. "We will naturally lead talks with the Polish government on an agreement," Richard Brabec, the Czech environment minister told reporters.