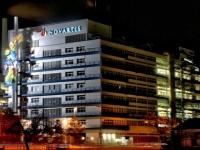 Six executives of Swiss pharmaceutical giant Novartis have been indicted in a South Korean bribery scandal. The indictments follow similar charges in China, Turkey and the U.S. and allegations of falsifying drug trial data in Japan. Korean prosecutors have recommended that Novartis sales be suspended for six months.

One of the six executives charged in the scandal is Moon Hak-sun, who was first hired as a clinical test manger in 1994 and rose through the ranks to be appointed CEO of the South Korean subsidiary last September, the first Korean national to get the top position. "I will make utmost efforts to deepen my understanding about the Korean market and find ways to satisfy the needs of our customers," he announced at the time of his appointment.

Less than a year later, the Seoul Western District Prosecutor's Office charged that Moon was implicated in a scheme to offer kickbacks to doctors who attended seminars hosted by medical journals in return for recommending Novartis products. All told, 20 billion won ($18 million) was allegedly paid out. A total of 15 doctors and the heads of five medical journals were investigated for their role in the scandal in addition to the Novartis executives.

"We have acknowledged and regret that certain associates in Korea conducted small medical meetings and other scientific-related activities through trade journals, in violation of our policies and inconsistent with our culture and the expectations society has for us and our industry," Klaus Ribbe, the CEO of the global company, said in an official statement. "However, we reject the implication that the alleged conduct was sanctioned by the most senior management of Novartis Korea."

A financial analyst, who asked to remain anonymous, told the Korean Times that Moon was probably 'a scapegoat for his non-Korean predecessors.'

The South Korean government has not sought to detain Moon under the indictment but Novartis has suspended him from his job.

Certianly the company has been accused of similar practices around the world. In 2015, Novartis paid $390 million to settle charges that it paid bribes to specialty pharmacies in the U.S.

This past March, Novartis paid out $25 million to the U.S. Securities and Exchange Commission to settle charges that company employees paid bribes to doctors in China, in violation of the U.S. Foreign Corrupt Practices Act.

U.S. regulators say that Novartis flew 20 Chinese health care professionals and their spouses to a medical conference in Chicago in 2009. Company officials also allegedly provided the doctors $150 in "walking around" money, took them to strip clubs and to see the Niagara Falls.

The month before Novartis settled charges in China, a whistleblower in Turkey came forward to say that the company paid Alp Aydin Consultancy $290,000 plus expenses in 2013 and 2014, to get sweetheart deals from government officials. The consultancy was accused of arranging for government hospitals to buy Novartis drugs as well as a successful effort to get government permission to rename two company drugs. The latter scheme helped Novartis win $50 million in orders because the new names no longer showed up in international price comparisons.

The company has refused to comment on the Turkish allegaations. "As a matter of policy, we don't comment on such investigations even if the complainant decides to make them public," Eric Althoff, a company spokesman, told Reuters. "We take any allegation of inappropriate behavior extremely seriously and investigate all allegations thoroughly."

Meanhile in Japan, Novartis is battling charges of falsifying drug trial data. The company has been accused of altering clinical test results for Diovan, a blood-pressure drug.  Other employees have been accused of shredding documents and hiding severe side effects of a leukemia drug.

"If some of them have destroyed documents, it's a pure violation of our code of conduct and that employee has to leave as soon as we discover that," David Epstein, head of the firm's pharmaceutical division, said at the time. "I'd like to once again apologize for Novartis' involvement in this issue." Epstein has since left the company.