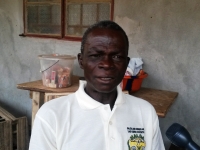 Sierra Leonian courts have started to release a group of community activists from the Malen Land Owners and Users Association (MALOA) who were jailed recently for taking part in a October 2013 protest at a palm oil plantation operated by Societe Financiere des Caoutchoucs (Socfin).

The activists were demanding compensation for their land that was leased to Luxembourg-based Socfin for a $100 million palm oil project in the southern province of Pujehun in 2011. The land award was made by the current government headed by President Ernest Bai Koroma who has favored the introduction of industrial farming as a way to encourage foreign investment.

Koroma says that such farms can help bring much needed money into one of the poorest countries in the world. But MALOA, which represents villagers from about 30 communities whose land was taken for the Socfin project, says that the farmers never consented. This is a major issue in rural Sierra Leone where community agriculture is the main source of income especially after a brutal civil war in the 1990s that displaced about half of its population.

"I have become a stranger in my land of birth because the bush which had been my source of wealth and authority is no more," Bockarie Swarray, one of the landholders who was arrested after he lost his land and joined the protests, told Awoko newspaper. "Anyone who owns land, lives off the land, knows we are not ready for it and it has left us in great constraint," Mammy Thomas, a community member, told the Oakland Institute. "To the extent  that the money is given to us, it is not enough to take care of even one person."

Multiple protests have been launched against Socfin ever since it started planning the project. The government has reacted harshly by arresting some of the activists while the local police have even opened fire on protestors.

Last month Justice Desmond Babatunde Edwards at the Bo High Court ruled that the October 2013 protestors were guilty of 'incitement, conspiracy and destruction' of palm oil trees, and ordered them put in jail pending the payment of fines ranging from Le15 million ($3,650) to Le60 million ($14,600).

Siaka Sama, a former member of parliament, and Sima Mattia were the first two to be released after the Coalition of Civil Society Organizations raised Le30 million ($7,300) to pay his fine. "We are working round the clock to pay the fines of the remaining four," Joe Rahall of Green Scenery told Awoko news last week.

On September 8, 2015, seven MALOA members were arrested on charges of "writing down names of people in the town without the knowledge of the chiefs".

The Observatory for the Protection of Human Rights Defenders has started a petition to support the MALOA activists. "The Observatory fears that the arrest of the seven MALOA members only aimed at sanctioning their peaceful human rights activities," the organization wrote in a petition on its website. "Therefore, the Observatory calls upon the authorities of Sierra Leone to put an end to all acts of harassment against them as well as against all human rights defenders in Sierra Leone."

Meanwhile a French court is also weighing in on the matter. The BollorÃ© group, which owns 39 percent of Socfin, has sued the publishers of Basta! magazine, a small alternative news weekly, for defamation over the publication of a 2012 article on the company's investments in Sierra Leone. An eight hour hearing was held last month and a decision is expected in April.