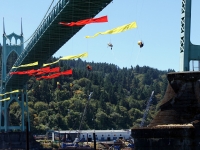 Greenpeace temporarily blocked Shell from drilling for oil in the Arctic by blocking the path of a specialized ice-breaking ship in Portland, Oregon. Thirteen climbers suspended themselves from a bridge while hundreds of local supporters paddled below in kayaks forcing the company to delay operations for almost two days.

Over the last seven years, Shell has spent some $7 billion to explore for oil in the Chukchi Sea which lies between Siberia and Russia. This past May the Obama administration approved the company's plan to drill six trial wells at a site named Burger, some 70 miles off the coast of Alaska.

Environmental activists say that the Anglo-Dutch company's plans threaten iconic species such as polar bears, walrus, beluga whales, bowhead whales, and seals as well as indigenous communities who have depended on the ocean for their subsistence way of life for millennia.

"Even the (U.S.) Department of Interior's own scientists have said that if an oil company drills in this region where Shell wants to drill, that there is a 75 percent chance of a major oil spill," Annie Leonard, Greenpeace executive director, told Democracy Now!, a syndicated radio program. "Greenpeace everywhere has made this a global priority, and we doubling down to protect the Arctic and stop that drilling."

"If drilling resulted in an oil spill, there would be no way to clean or contain it, and the consequences could be catastrophic," Robert Thompson, an indigenous representative from Kaktovik village in Alaska, said in a press statement.

Shell has already had several major mishaps since it started actively looking for oil in the Arctic. (see timeline here) For example, in 2012, the Noble Discoverer, one of the drilling ships being used by Shell, caught fire after it was hit by an ice floe. Then the Kulluk, another Shell drilling ship, was declared a total loss when it ran aground on New Year's Eve and had to be sent to Singapore to be broken down for scrap.

The most recent accident occurred when the MSV Fennica, another Shell ship, hit an underwater object in Dutch Harbor, Alaska, in early July. The Fennica was carrying a special kind of oil spill response equipment called a capping stack that the company is required to have on hand during drilling operations. Shell was forced to halt drilling while the Fennica traveled to Oregon for repairs at Vigor Industrial.

When Greenpeace got wind that the repairs were complete and the Fennica was planning to depart via the port of Portland, the activist group dispatched climbers who rappelled off St. John's Bridge in the middle of Wednesday night to dangle 200 feet above the water right in the path of the ship. The thirteen activists carried supplies with them that would have allowed them to stay aloft for days.

Hundreds of local activists soon joined the blockade of the Fennica by paddling out in kayaks to support the climbers. On Thursday morning Shell went to court to remove the protestors, arguing that Greenpeace had violated a May injunction not to impede company ships traveling to the Arctic.

U.S. District Court Judge Sharon Gleason agreed with Shell and imposed an initial $2,500-an-hour fine against Greenpeace on Thursday, which was to be increased to $5,000 an hour on Friday, $7,500 an hour on Saturday, and $10,000 an hour on Sunday.

"The staging of protesters in Portland was not safe nor was it lawful," Shell said in a statement. "Foremost, Greenpeace demonstrated a complete lack of regard for the authority of a federal court.  We are pleased with today's court ruling that holds Greenpeace in contempt and prescribes fines for further non-compliance."

On Friday, police, firefighters and U.S. Coast Guard officers came to Shell's rescue and lowered the climbers from the bridge, allowing the Fennica to leave for the Arctic.

The company is expected to resume exploration soon but will likely have to stop once the cold weather sets in.