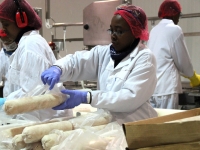 “I disagree that I was part of a corrupt scheme,” Tamson Hatuikulipi told the court last month. “All my books are up to date, and all relevant invoices are traceable.”

The scandal was first revealed by Jóhannes Stefánsson, the former general manager of Samherji in Namibia, when he blew the whistle and turned over 30,000 internal company documents to Wikileaks in 2019.

Until Namibia won independence from South Africa in 1990, foreign trawlers from countries like Spain and Russia were the main beneficiaries of Nambia’s rich fishing grounds in the Atlantic. After independence, Nambia’s new government restricted fishing to companies that were majority controlled by Namibians.

This effectively changed in 2012, when Nambia’s Ministry of Fisheries and Marine Resources awarded 75 percent of the annual horse mackerel quotas to Katla Seafood, a company in Namibia that was secretly controlled by Samherji.

Stefánsson says that his contact in Namibia was Tamson Hatuikulipi, the well connected Namibian businessman who is married to the daughter of Bernhard Esau, Namibia’s Minister of Fisheries and Marine Resources; and also happens to be a cousin of James Hatuikulipi, the chairman of Fishcor, the state-owned fishing company. The documents suggest that Samherji transferred approximately US$10 million via Cyprus and the Marshall islands to a number of high-ranking officials in Namibia in order to win the quotas.

Stefánsson’s allegations were featured in major exposés by Ríkisútvarpið television (the Icelandic National Broadcasting Service), Stundin (an Icelandic newspaper), The Namibian newspaper and Al Jazeera television in 2019 and 2020.

“Samherji does whatever it takes to get its hands on the natural resources of other nations,” Stefánsson told Stundin. “The company deceives and makes empty promises all in order to exploit these resources. They do not hesitate to use bribes and break the law so that they can take as much money as they can out of the country and leave nothing behind but burnt soil and money in the pockets of a corrupt political elite.”

At the court hearings last month, Hatuikulipi admitted that he did introduce James Hatuikulipi to Samherji executives, but stated that that he was paid legally for this work as a consultant to the company.

Samherji says that the allegations are baseless. “We are deeply shocked that Johannes Stefansson not only admits being involved in illegal activities, he is now also making allegations against colleagues. This is not how we do business. This is not Samherji,” Thorsteinn Mar Baldvinsso, Samherji CEO, said in a statement to the press in 2019.

Experts say that the role of Samherji needs to further investigated. “All too often, we tend to focus much more on the beneficiary of corruption and not the supplier of corruption,” Alvin Mosioma, executive director of Tax Justice Network Africa, told Al Jazeera.

The key individuals that the Namibian government want to question in this matter are Egill Helgi Árnason and Aðalsteinn Helgason, former managing directors of Samherji in Namibia, and Ingvar Júlíusson, the former chief financial officer of Samherji in Namibia. However the Icelandic government has rejected requests from Martha Imalwa, Namibia’s prosecutor general, for help in extraditing the three individuals.

The Namibian government has also asked Samherji to pay N$318 million (US$21.36 million) in unpaid back taxes, which the company has refused to pay until the legal matters are resolved.

Meanwhile Samherji has also been accused of paying several hundred Icelandic fishermen who were working on the fishing trawlers in Namibian waters via bank accounts in the Faroe Islands in order to avoid paying income tax in Namibia. According to the documents published by Wikileaks, some US$500,000 was sent from Mermaria and Arcticnam, subsidiaries of Samherji in Namibia, to Tindholmur, a subsidiary of Samherji in the Faroe Islands, in 2016-2017.