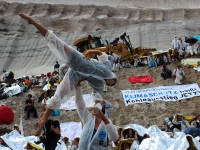 Hundreds of climate activists broke through a police line at RWE’s Garzweiler lignite coal mine in North-Rhine Westphalia, Germany, demanding government take action against climate change. The protesters successfully halted operations for 45 hours by occupying the mine and chaining themselves to train tracks.

“Never before were so many people determined. Time is running out and the climate crisis demands an immediate withdrawal from coal mining,” Nike Malhaus, a spokeswoman for the protest group Ende Gelände, told the Irish Times. “Because politics has failed, we made sure the coal diggers were halted.” (Ende Gelände means “Here and No Further”)

RWE (the company was originally named Rheinisch-Westfälisches Elektrizitätswerk Aktiengesellschaft), is the second largest producer of electricity in Germany and supplies electricity to over 20 million electrical customers and provides gas to 10 million gas customers, largely in Europe.

The Essen-based company acquired the rights to mine the Hambach Forest, in western Germany, some 30 kilometers from the city of Cologne in the late 1970s before Germany passed a 1990 law requiring environmental assessments. Over the last several decades, the government has allowed hundreds of people to be evicted and dozens of villages removed in order to allow RWE to expand its coal mining operations.

“We have permits; we had court cases that stated [expanding] Hambach mine is all right,” Guido Steffen, a RWE spokesperson, told Public Radio International.

But today, with only about 10 percent of the 12,000 year old forest left standing, shutting down the sprawling 48 square kilometer mine site has become a rallying cry for European climate activists; just like their counterparts in North America who flocked to the Standing Rock Indian Reservation, South Dakota, to try to stop the Dakota Access Pipeline.

Activists have chosen four distinct tactics to try to shut down Garzweiler: mass mobilizations; direct occupation of the mine site; and tree sits to prevent it from expanding any further; and lawsuits.

The latest mass mobilization began in late June when some 40,000 protesters who showed up to a student protest organized by Fridays for Future (FfF) and Ende Gelande in the city of Aachen to demonstrate against fossil fuel usage and its contribution to climate change.

“We still have hopes, the door is still open to a future within the 1.5°C limit. But we will miss this last chance if we don’t act immediately. Today we set out with thousands of people towards a future without fossil fuels, without exploitation and without this destructive quest for infinite economic growth,” Sina Reisch, another spokeswoman of Ende Gelände, one of the organizers of the protest, said in a June press release.

On June 23rd, a break-away group of thousands of protesters marched from Aachen to the Garzweiler open-pit mine. The protesters, who donned white protective suits and air pollution masks, were met by police awaiting their arrival. Hundreds of protesters pushed at the police line until they were able to break through and get into the mine site.

The occupation of the mine, as well as activists chaining themselves to RWE train tracks, resulted in halting mine operations for almost two days.

Meanwhile, other activists have moved into houses in abandoned villages at the edge of the forest, and even built houses in Hambach trees to prevent RWE from expanding the mine further into the forest. Intital habitation protests that began in 2012 lasted a year and a half before activists were removed by police in 2013.

The protesters resumed occupation activities in 2014 when tree houses were once again erected and barricades put in place by activists to prevent RWE and police vehicles from accessing the forest.

For the most part, the protesters were begrudgingly tolerated by the authorities. Some activists were arrested for resisting the removal of police barricades and allegedly throwing stones at workers or police. Still others have been accused of throwing fireworks and Molotov cocktails.

But in September 2018, a large scale police operation began to get rid of the protestors. Some 75 police cars, armored trucks, helicopters, and heavy clearing equipment were brought in. Water-cannons and large safety mats were also seen on the site. 86 treehouses were taken down and destroyed in the Hamach forest, according to the police’s own press releases.

"We're here to enable logging activities and to prevent RWE employees and machines from getting attacked," Sandra Schmitz, an Aachen police department spokesperson whose jurisdiction covers the Hambach Forest, told Deutsche Welle radio. "We have a legal order to avert danger and to prosecute criminals - and that applies to all people and all institutions," she added.

Last, but by no means least, the mine is also opposed by BUND, a German environmental organization, on the grounds that Hambach Forest is home to 140 species, which could lose their habitats to clear cutting if the mining continues.

The NGO has taken the German government to court over evidence that further clear-cutting of the Hambach could decimate the Bechstein bat population, an endangered species local to the region. Such legal tactics have worked in other countries in the past – ie in the Mojave Desert in California where a legal petition to grant the local desert tortoise endangered species status, successfully resulted in halting a 70 acre nuclear waste dump.

BUND’s legal action has had some effect already - the Munster administrative court ordered immediate halt to forest clearance until the summer of 2020 while it evaluates the information provided by BUND.

Incidentally, the mine’s continued operations fly in the face of statements by Angela Merkel, the German chancellor, who has said that she would like to move forward with policy changes to make Germany, currently Europe’s largest economy, become carbon neutral by 2050. (The country has also committed to phasing out nuclear power by 2022.)

So the activists note that it is particularly ironic that Hambach has not been shut down given that lignite coal is the lowest grade of coal due to its low energy density and poor transport efficiency as well as having the highest carbon emissions compared to other grades of coal.