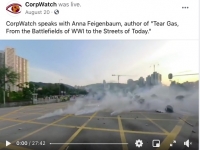 CorpWatch executive director Pratap Chatterjee interviews Anna Feigenbaum, associate professor in Digital media & communication at Bournemouth University in the Southwest of England, on the role of private sector companies that manufacture riot control weaponry, used against protestors around the world. She is the author of "Tear Gas, From the Battlefields of WWI to the Streets of Today." (Verso press, 2017)

Our half hour interview includes two short videos from Amnesty International explaining what it is like to be teargassed and why it has become an instrument of repression; a video made by the American Civil Liberties Union explaining why tear gas should not be used by U.S. police, especially during the coronavirus pandemic; and a video from Human Rights Watch about how tear gas canisters have been used to kill people in Iraq.

• Combined Systems Inc – Largest US exporter, CSI is one of the largest suppliers to the Department of Homeland Security. CSI is part of the Carlyle Group’s portfolio, a private investment firm.

• Defense Tech - Defense Tech ammunitions, part of Warren Kander’s Safariland Group. Kanders is a Forbes rich-list investor. In 2019 he was forced to resign from his role on the board of the Whitney Museum of Art following major protests.

• Mace – First manufactured and sold by General Ordinance Equipment Corporation (GOEC). This liquid spray first used a 0.9 percent solution of CN when it was introduced in 1965, then switched to CS in 1968. Both formulas caused severe pain. Mace was not the first police spray—versions appeared as early as the 1920s—but it was the first to gain popularity across police forces. Mace continues to be widely used by police and law enforcement and is sold to the public in different formulas.

• PepperBall – A US-based company specialising in the manufacture of small ball pellets that contain various chemical irritant materials to cause trauma, as well as dye and marking agents to tag people. Pellets are designed for rapid fire with more contact impact than larger ‘rubber bullets’ and related impact munitions.