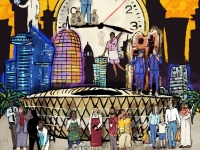 Cover of 'We Work Like Robots' report by Equidem.

The Bandary International Group, a major construction company in Qatar, has built and managed multiple high end luxury hotels in collaboration with international hotel chains like Accor from Paris, France; Centara Group from Bangkok, Thailand; and the Langham Hospitality Group in Hong Kong.

Many of these projects were commissioned in anticipation of the 1.2 million visitors who are expected to attend the month long games organized by the Fédération Internationale de Football Association (FIFA) that kicks off in just over eight weeks.

Thousands of workers from south Asia and southeast Asia have been working around the clock to complete construction of the hotels as well as vast stadiums and other facilities that will be used for the events. Activist groups like Amnesty and Human Rights Watch have reported that these workers have often been badly paid and suffered from terrible working conditions on these projects such as having to work in extreme heat for many hours a day, which has often led to demonstrations and protests by the workers.

"Can you imagine how desperate the workers must have been to protest in 42 degrees?” Mustafa Qadri the founder of Equidem, a migrant workers' rights group, told the BBC in August. (42 degrees Celsius is 107.6 degrees Fahrenheit) “They aren't political actors, they just want to be paid for their labor.”

The Qatari government confirmed to the BBC that the protestors had been deported.

The protests against Bandary International Group, which Qadri says has failed to pay wages for seven months, are by no means isolated. France 24 has tracked down TikTok, Twitter and YouTube videos of workers protesting against JH Construction, MCC Mestalla Construction company and Redco International over the last 12 months.

In July 2022, Equidem published a report that chronicled the fate of the migrant workers involved in construction and hotel management business, titled: “We work like robots: Discrimination and Exploitation of Migrant Workers in FIFA World Cup Qatar 2022 Hotels.”

“For nine months, we were made to work for more than 12 hours a day, without a day off. In order to keep our hours hidden, we were prevented from clocking in and clocking out,” an Indian worker at Holiday Villa Hotel and Residence told the NGO in June 2022. “I was on the verge of going insane.”

“We never get enough rest or sleep when the hotel is busy. We work like robots without food or water continuously, sometimes for 15 hours during peak season,” another worker at the InterContinental Doha told Equidem in June 2022. “From associates to the management level, if the hotel is busy, we have to stay. We are not paid for these extra hours.”

Female workers at the hotels say they are often harrassed. “We get sexual remarks from our colleagues often. They tease us. I get comments like, ‘Wow, you look so sexy today,’ or ‘Your makeup is superb - my heart is swooning.’ Sometimes they touch us inappropriately while working together,” a Nepali worker at the Crowne Plaza, told the researchers in April 2022. “I cannot say anything because if I do, they will say that it was unintentional, and they will dismiss me. I just ignore comments and advances.”

Worse yet, many workers are believed to have died on the construction sites. An estimated 6,500 migrant workers from five South Asian countries - Bangladesh, India, Nepal, Pakistan, and Sri Lanka – have died in the last decade in Qatar, acccording to numbers compiled from the country embassies by the Guardian newspaper.

“A very significant proportion of the migrant workers who have died since 2011 were only in the country because Qatar won the right to host the World Cup,” Nick McGeehan, a director at FairSquare Projects, a labor rights group, told the Guardian.

However, precise details on how or why they died is not available. "Qatar has refused to make public any meaningful data on migrant worker deaths, and heat regulations designed to protect workers from the dangers of extreme heat and humidity are still woefully inadequate," Hiba Zayadin, Gulf researcher at Human Rights Watch told Jadaliyya, an independent website that covers the region.