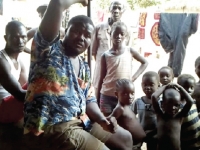 Sierra Leone police opened fire on a group of protestors who were demonstrating against a palm oil plantation in the southern province of Pujehun. The project is being developed by Societe Financiere des Caoutchoucs (Socfin), a French agri-business giant.

"They opened fire on us just for fighting for our rights to the land," said Sima Mattia told Reuters.

Sierra Leone, a small West African nation that ranks as one of the poorest countries in the world, is slowly emerging from a brutal civil from war that displaced about half of its population between 1991-2002. Food security is a major national problem, and the current government headed by President Ernest Bai Koroma has favored the introduction of industrial farming as a way to meet this challenge" by leasing large swathes of land to foreign investors.

Activists say that the agricultural development plan has failed. "The consensus was that people were worse off than before," Joan Baxter, senior fellow with the Oakland Institute, a US-based think tank, recently told the Guardian. "Companies are making grandiose promises about jobs and development but they will not employ all of the people who were employed in subsistence farming."

This is not the first time that the police have cracked down on protestors against Socfin. Some 39 people were arrested during the planning stages of the $100 million project in 2011 when the company was first awarded 6,500 hectares of prime farmland for plantation development.

Last month another 45 individuals were arrested and persecuted for organizing protests against the company, according to a group called the Malen Affected Land Owners Association (MALOA).

"I have become a stranger in my land of birth because the bush which had been my source of wealth and authority is no more," Bockarie Swarray, one of the landholders who was arrested after he lost his land and joined the protests, told Awoko newspaper.

Gerben Haringsma, Socfin's country co-ordinator, defends the company. "What we do is not ideal, everything we do could be done better, but today we pay salaries to almost 3,000 people, who have no land and had no job until we came," he told the Guardian. "I'm so sick and tired of defending myself as if I'm doing something wrong."

Locals say that all they want is reasonable compensation. "We really are not against investment. We really are not. We desire that there is progress in our community. The company has come. We are not against that initiative," Mammy Thomas, a community member, told the Oakland Institute. "However there are many problems that are affecting us, coming from the company. Anyone who owns land, lives off the land, knows we are not ready  for it and it has left us in great constraint. To the extent  that the money is given to us, it is not enough to take care of even one person."

Other foreign agricultural companies in Sierra Leone have also come under fire for land grabbing. For example, Sierra Leone Network on the Right to Food (SiLNoRF) and Brot FÃ¼r Alle (Bread for All), an NGO based in Switzerland, recently reported that Addax Bioenergy, a Swiss energy company, was jeopardizing the livelihoods of thousands of subsistence farmers in order to export ethanol made from sugarcane grown in Sierra Leone.

Addax planted cane on large areas of productive land known as the bolilands even though it promised not to, alleges SiLNoRF's in its 2012 annual monitoring report. "[Addax] has taken away most of the bolilands and the people, they are saying that they have been stolen from them," Abass Kamara, programmes coordinator for SiLNoRF, told CorpWatch.