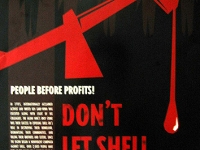 The Obama administration is backing Shell Oil after abruptly changing sides in a landmark U.S. Supreme Court case that could make it even more difficult for survivors of human rights abuses overseas to sue multinational corporations in federal courts. The case will be heard on October 1.

Lawyers at EarthRights International, a Washington-based human rights law nonprofit, say they suspect that a new legal submission  - which was signed only by the U.S. Justice Department - reflects tensions inside the government on how to deal with multinational corporations do business in the U.S. Significantly, neither the State nor the Commerce Department signed on to the brief, despite their key roles in the case.

"It was shocking," Jonathan Kaufman EarthRights legal policy coordinator commented to Reuters. "The brief was largely unexpected, based on what they had filed previously, and pretty breathtaking."

At issue is the Alien Torts Claim Act (ATCA) - an 18th century U.S. law originally designed to combat piracy on the high seas - that has been used during the last 30 years as a vehicle to bring international law violations cases to U.S. federal courts.

Lawyers began using ATCA as a tool in human rights litigation in 1979, when the family of 17-year-old Joel Filartiga, who was tortured and killed in Paraguay, sued the Paraguayan police chief responsible. Filartiga v. PeÃ±a-Irala set a precedent for U.S. federal courts to punish non-U.S. citizens for acts committed outside the U.S. that violate international law or treaties to which the U.S. is a party. ATCA has brought almost 100 cases of international (often state-sanctioned) torture, rape and murder to U.S. federal courts to date.

In recent years, a number of ATCA lawsuits have also been filed against multinationals which has angered the business lobby. "Expansion of this problem into the international arena via ATCA promises nothing but trouble for U.S. economic and foreign policy interests worldwide," wrote John Howard, vice president of international policy and programs at the U.S. Chamber of Commerce. "U.S. national interests require that we not allow the continuing misapplication of this 18th century statute to 21st century problems by the latter day pirates of the plaintiffs' bar."

No plaintiff against a corporation has won on ATCA grounds, although some have settled or plea bargained. In 1996 Doe v. Unocal, a lawsuit filed by ethnic Karen farmers against Unocal (now owned by Chevron) set a new precedent when a U.S. federal court ruled that corporations and their executive officers could be held legally responsible for crimes against humanity. Unocal contracted with the Burmese military dictatorship to provide security for a natural gas pipeline project on the border of Thailand and Burma. The suit accused Unocal of complicity in murder, rape and forcing locals to work for Unocal for free. Shortly before the jury trial was set to begin in 2005, Unocal settled with the plaintiffs by paying an undisclosed sum, marking the first time a corporation settled in any way a case based on the ATCA.

Another such case was filed against Chiquita, the global banana producer, by surviving victims of brutal massacres waged by right-wing paramilitary squads in Colombia. The paramilitary, who killed thousands of civilians during Colombia's dirty war of the 1980s and 1990s, were on Chiquita's payroll in the 1990s. Now-U.S. Attorney General Eric Holder defended Chiquita in the case and won a plea bargain for them of $25 million and five years of probation.

Holder isn't the only Justice Department staffer who defended a corporation in an ATCA case. Sri Srinivasan, recently nominated for the second highest position in the Justice Department, represented Exxon Mobil in a case brought against them by Indonesian villagers who survived alleged attacks, torture and murder by Indonesian military units hired by Exxon to provide security. Lower courts disagreed on Exxon's liability under ATCA, and in 2011 an appeals court sent the case back to trial.

Which brings us to the case currently before the Supreme Court  - Kiobel v. Royal Dutch Petroleum Co. (Shell) - brought by relatives of nine Nigerian Ogoni activists who were executed in 1995 by a military dictatorship allegedly working in collaboration with Shell. For the last ten years, the widow of executed Dr. Barinem Kiobel and other Nigerian refugees have been trying to prove in court that the British-Dutch multinational oil company Royal Dutch Petroleum Co., or Shell Oil, conspired with the Nigerian military to illegally detain, torture and kill critics of Shell's environmentally destructive practices in the Niger Delta.

In February the Supreme Court agreed to hear the case to determine whether or not corporations - as opposed to private parties - could be sued under the ATCA. At that time the Justice Department, submitted a "friend of the court" brief that said they could.

Lawyers say that if the Supreme Court accepts that the case can be heard in U.S. courts, it will mark a significant step forward for human rights activists. It will also send a powerful signal to business that any violations overseas can be prosecuted if they do business in the U.S.

Then in June, the Obama administration, suddenly changed its opinion. The new brief from the Justice Department "read like a roadmap for getting rid of cases Srinivasan and Holder had worked on previously" EarthRights attorney Kaufman  told Reuters.

In its submission filed in response to a Supreme Court order to re-argue whether or not ATCA applied to territories outside the U.S., the Justice Department urged the Supreme Court to dismiss the suit against Shell. The brief's authors stated that the ATCA was not appropriate for Kiobel or other lawsuits involving foreign corporations accused of collaborating in human rights abuses with a foreign government outside U.S. territory.

U.S. courts "should not create a cause of action that challenges the actions of a foreign sovereign in its own territory, where the [sued party] is a foreign corporation of a third country that allegedly aided and abetted the foreign sovereign's conduct," the Justice Department wrote.

However, the Justice Department stopped short of categorically barring all similar cases that occur outside the U.S. from ATCA eligibility, and it left ambiguous whether the current recommendation would prevent future ATCA lawsuits against U.S. citizens or corporations, or in cases where abuses take place on the high seas.

EarthRights International filed three Freedom of Information Act requests in July to look for evidence showing whether or not corporate interests and lobbying influenced the government's decision to back Shell.

"If disclosed, this information will help reveal whether or not the business interests of Attorney General Eric Holder or Deputy Solicitor General Sri Srinivasan influenced the government's position in Kiobel," said Kaufman.