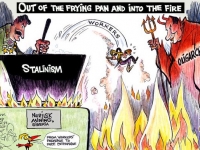 The launch of Russia's stock markets in the early 90s and the privatization of state assets was one of the best things that happened in the short career of Dmitri Mededov, a Russian attorney.


Opening up Russia's stock market and changing the economic system included lucrative loans against stock. These loans were designed to benefit the Russian government of President Boris Yeltsin, which could not finance its huge budget deficits by just printing more money - a stopgap measure that would just spark inflation and generate other serious financial problems.


"So we thought of a plan to have commercial banks loan all the money they wanted to the government in exchange for bonds and equities, using oil and gas or mining companies as collateral. Of course they'd lose that if they did not pay the loans back in time," said Mededov, referring to a master plan he brought back from his studies at Yale in the United States.


The biggest transfer was the Norilsk Nickel company. For US$170 million, Russia's Oneksimbank received 38 percent of the world's largest nickel and platinum company. Ten years ago its annual net profit was $1.2 billion, and today, as a high-profile global corporation, Norilsk earns that amount per financial quarter. Its worth as of July 2008 is valued at $53 billion.


Much of that increase is linked to rising nickel prices sparked by the continuing record-high demand by steel producers, and by the trade activity of global investment funds.


When Mededov started out, the price of nickel was not even $1,000 per ton; it now tops $50,000. "The $170 million Oneksimbank paid for the company is pure theft and similar acquisitions of oil and gas or mining and minerals corporations should be investigated," says Stanislav Russki, a young Communist and close advisor to the leaders of a movement hoping to steer Russia back to a more socialized industry.


Russki placed a dramatic ad in the Moscow newspapers requesting that Norilsk's vast profits and other monies "earned"' by the new Russians, be returned to the Russian people who have given their "blood, sweat and tears to develop this greatest nation on Earth."


"We have democratic and basic rights. No one will take them away from us," the ad says. Russki has seen the effect of unbridled corporate activity firsthand in his native Krasnoyarsk. In the Stalinist era, some 350,000 forced workers helped build the town of Nikel, near the border with Norway. In 1932 Stalin established other mining projects: gold from Jakutsk; coal from Vorkuta; fluorspar from Anderma; and nickel, copper, palladium and platinum from Norilsk.


Before Norilsk Nickel dominated the area, the arctic area was pristine. Today, winter satellite images reveal the city as a black blister on a white sheet of snow. A grey veil covers the earth well into Norway. Nikel itself is treeless. Layers of dust cover the houses and electricity poles. There are few cars. Most transportation is old dusty buses.

In 1993 when Norlisk became a privately-owned stock-based company, Russian entrepreneur Vladimir Potanin arranged to acquire 38 percent of the shares and so became one of the most powerful corporate executives in Russia. Norlisk now owns two production sites, in the Tajmyr-peninsula - around the towns of Norilsk, Talnach, Kajerkan and Doedinka and in the Kola peninsula - around Montsjegorsk, Zapoljarny and Nikel. Potanin's fortunes have risen along with the company's.


A 2000 PBS documentary on the new Russian capitalists called him a "true capitalist tycoon and one of Russia's new oligarchs."


Olga Belaynesh, the conservator of the local museum called Potanin  "one of the great Russians of all times," and pledged to soon put "a complete biography on the Internet of the man who is going to save the region."


Despite its scope, Nikel is just one of Norilsk's mining centers. Its great mines are in the town for which the company was named. In Norilsk, not too far from the North Pole in Northern Central Siberia, the company controls vast quantities of the world's mineral reserves: 30 percent of the nickel, almost 45 percent of the platinum, 20 percent of the cobalt, and 3 percent of all the copper.


One of the ways Potanin gained a foothold in burgeoning capitalist Russia was through the loans-for-shares program he helped design and which he used to build his equity and wealth to a quick and staggering $14 billion. He secured ownership of Oneksimbank in 2001 after winning a legal battle for Norilsk Nickel. Potanin lured more investors and started another mining and metal company, Kolskaja GMK, now publicly traded on stock markets all over the world. But this unrestrained privatizing came with unexpected social costs: half of the company's 120,000 workers were fired and sent home.

Some argue that wherever Norilsk operates, it not only generates wealth for its owners, but environmental and social havoc for workers and residents. Both Russian and foreign NGOs have called Norilsk the most polluted place on earth. And some people look back on the "good old days," saying that, bad as conditions were under the old Soviet system when the state controlled the industry, at least then people had a system they could count on.


"My enclave of the Russian mining industries is so far away and isolated from the rest of the country that really big changes are not very visible here," says Josep, one of the Norilsk plant directors, partying in Krasnoyarsk. "Here we are like a mammoth in a glacier and Norilsk is a pre-historic Soviet ice-fossil in a very well-preserved part of the USSR."


Although the area is no longer as secret as it once was, it is still impossible to visit Norilsk without the proper, complicated-to-obtain internal visa and permissions.


But it is possible to meet plant directors in Krasnoyarsk, a town some 1,200 miles south of the closed city. During the dreary winter months several of them were spending a long weekend for business and pleasure in an overpriced Krasnoyarsk hotel, a regular practice of theirs to escape the filth and noise of the company town.


The vodka-fueled discussion veered to a popular lament in the region that most of the wealth and prosperity generated there is flowing to Moscow, and that residents would be better off if they separated their land from Russia.


"We are very sorry we opened up to the outside world back in 1992," says Josep, the plant director, cupping his hands behind an ear to hear better, the hearing loss a result of the constant loud noise in the factory. "We provide the wealth to them now, and they have a big show off."  He wants to return to the more equitable plans he believes Stalin envisioned and that were depicted in "the old-fashioned" Soviet movies.


"But where I work is no movie but reality. Within the parts of the factory where smelters pump out heat you cook to death because of the extreme high temperatures of over 1,200 degrees Celsius, and outside you instantly freeze to death in winter." His thundering laugh can be heard all over the restaurant.


In Krasnoyarsk you can witness some of the changes that have swept the country in the past 10 years. The hotel lobby bustles with businessmen sporting the latest model mobile phones, smart Italian suits and shiny shoes, enjoying crab cocktails and other luxurious food and drink. These believers in a new unrestrained capitalist system are the wheeler-dealers making money from the equity and stock of local companies. Women, apparently with different financial interests, sometimes also frequent the lobby.


But for regular workers, notes Josep, other signs of modern times include unemployment. More than 10,000 job seekers are now registered with a local employment bureau.


The dreams of many romantics who had hoped to retire and live out their old age here in this remote northern region have vanished, as Norilsk - instead of becoming an economic springboard for the many, not just the few - has become a trap for residents.


The recent volatility has opened the door for a battle for control of the company. Mikhail Prokhorov, another Russian billionaire, has called for the creation of a $100 billion Russian mining company and faces an intense boardroom battle with former friend and business partner Vladimir Potanin.


"We want the company's board to re-appoint Mikhail Prokhorov as chief executive of the company," one union member tells CorpWatch.


The $100 billion mining company proposal is also supported by the Aluminum United Company, Rusal, which indicated in the late spring that it too wants to join with Norilsk Nickel in the endeavor. Rusal's billionaire owner, Oleg Deripaska, told Russian newspapers in June he wants to own 25-50 percent of Norilsk.


Not everyone welcomes these plans. Vladimir Potanin's holding company owns less than 30 percent and has its own designs on a majority stake in Norilsk.


The greed, money and power swirling among Russia's new capitalist barons has made the workers and other locals dizzy with worry - not to mention noxious air. Union members shake their heads in disbelief, wary of an uncertain future and wondering whether to tie their lives and retirements to this remote arctic region, wishing for a more equitable society. "It is the best place on earth to live," says one of them, "but the billionaires have to stop fighting and think more about us. They have to start sharing our assets."