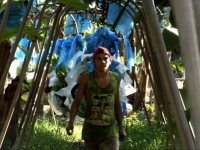 Lawyers for a group of some 1,200 Nicaraguan banana plantation workers appeared before the Paris Trial Court in an effort to force Dow Chemical, Occidental Chemical and Shell Oil to pay $1 billion in compensation for health problems caused by Nemagon, a pesticide sold by the three companies.

Lawyers Pierre-Olivier Sur and Clara Gerard-Rodriguez of FTMS Avocats, speaking on behalf of the farmers, appeared before the court at the three hour hearing, that took place on January 24th. Sur is the former head of the Paris Bar while Gerard-Rodriguez previously worked at the International Criminal Court.

“I believe that the French courts are going to do justice and are going to satisfy the anguish and hope of these Nicaraguan victims,” Gustavo Antonio López Argüello, a Nicaraguan lawyer for the workers, told the media.

Nemagon, a pesticide that contains dibromochloropropane (DBCP), was banned in the United States in 1977 when it was found to have caused sterility in male workers. However Nemagon continued to be exported to other countries such as Burkina Faso, Costa Rica, Nicaragua and the Philippines where it was used in banana plantations.

Nicaragua withdrew the pesticide in 1985 but it was too late for thousands of workers in and around the banana plantations of the Chinandega region where thousands were affected. “The most common effects are sterility, chronic kidney failure and skin disease,” Dr. Francisco López of Hospital España in Chinandega, told In These Times. “Some see their nervous system deteriorate. The women exposed show abnormally high numbers of miscarriages, and many of their children are born with congenital deformities.”

The Nicaragua related court battles have sprawled over three decades beginning in 1992 when Álvaro Ramírez, president of the Nicaraguan Association of Democratic Attorneys, brought a lawsuit against the companies.

Meanwhile the workers from Chinandega joined multiple marches and months-long encampments in the Nicaraguan capital of Managua, under the leadership of Victorino Espinales, beginning in 1999, to demand justice.

But all attempts to collect the compensation in the U.S. have failed. In 2009, a Florida court rejected a lawsuit against Dole, and a court in California followed suit the same year, after the companies claimed that the lawyers had used fraudulent victims and test results in Nicaragua. Victoria Chaney, the judge in California, even unsuccessfully attempted to disbar Juan Dominguez, one of the lawyers for the farmers.

“As long as Dole is permitted to prevail attacking the plantation workers’ attorneys and their clients with false allegations from anonymous witnesses that are not subject to investigation and effective cross examination, then there is no hope for justice for the sterilized Nicaraguan plantation worker in the U.S.,” Dominguez told the National Law Journal at the time.

With legal avenues in the U.S. closed to them, the farmers took their case to France in 2018, where courts have been more receptive to human rights cases abroad. In 2019, French courts froze €99 million in company shares pending a trial.

Dow's lawyers have argued that the case should not be heard in France. "These multinationals have never been present in the country," Jacques-Alexandre Genet, a lawyer for Dow, told the court.

But the farmers' lawyers say that the victims have no other recourse. “We live in a globalized world where it’s easy for multinational companies to hide assets so as not to allow justice and court orders to be enforced,” François-Henri Briard, a lawyer for the farmers, told the New York Times. “This is what the U.S. companies did in Nicaragua: They poisoned people, they were sentenced by the courts, and they left without paying anything.”

A decision from the Paris court is expected on May 11th – but it can yet be appealed. If the workers win, the judgement will be effective throughout Europe.