Nestlé and the Making of Brazil's Obesity Crisis 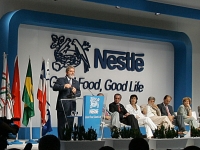 Today, one in four people in Brazil are considered obese, one of the highest rates in the world, a rate that doubled in just 20 years. Between 1980 and 2015, the number of Brazilian children who were obese skyrocketed 270 percent, according to data from the Institute for Health Metrics and Evaluation at the University of Washington.

Leading experts say much of the blame for this lies with Nestlé which has spent millions over the decades to undermine health education and food standards, and a marketing blitz that has penetrated every corner of the country.

“They’re not leaving an inch of country left aside,” Barry Popkin, professor of nutrition at the University of North Carolina, told the New York Times. "On one hand, Nestlé is a global leader in water and infant formula and a lot of dairy products. On the other hand, they are going into the backwoods of Brazil and selling their candy."

Most of Nestlé’s products contain ingredients that nutritionists classify as unhealthy. For example, approximately 70 percent of Nestlé products sold in Brazil in 2017 contained excess sugar and 52 percent contained excess saturated fat, according to a 2021 study by Instituto Brasileiro de Defesa do Consumidor (Brazilian Institute for Consumer Protection).

Indeed, a leaked company memo published in the Financial Times last year states that Nestlé’s own research indicates that 60 percent of its major food and drinks products do not meet a “recognised definition of health.”

As far back as 1947, Nestlé sponsored the first Brazilian Day of Child Care and Pediatrics organized by the Ministry of Education and Health.

In the 1960s, Nestlé launched a public relations offensive to get Brazil hooked on condensed milk with cookbooks, radio and television advertisements, and workshops. The ultra-processed product quickly became the foundation of many popular Brazilian sweets.

In 2010, Nestlé began a campaign to market its products among poor and remote communities by dispatching a floating supermarket of company products to travel deep in the heart of the Amazon.

And just last year, Nestlé backed a new guide for children’s health that directly contradicts the government’s own advice.

Over the years, Nestlé has invested heavily in marketing to pediatricians by paying for online lectures on weaning infants off breastfeeding, sponsoring pediatric residency institutions such as at the São Paulo Pediatric Society and paying fees for Brazilian pediatricians to register for the American Academy of Pediatrics annual conference.

But nowhere is Nestlé’s influence more widely felt than at the Sociedade Brasileira de Pediatria (SBP or the Brazilian Society of Pediatrics) with whom it has collaborated and sponsored for 75 years. The company even has a seat on the SBP board - occupied right now by Tamara Lazarini, a director at Nestlé Brazil.

In May 2021, SBP published “Temas da Atualidade em Nutrologia Pediátrica” ("Current Themes in Pediatric Nutrology") aimed at its 25,000 members. This report, which thanks Nestlé in its introductory pages, recommends vitamin D supplements for newborn babies, and 600 milliliters of cow's milk for children between one and two years of age "preferably fortified with vitamins and minerals and adequate protein content” – which are coincidentally the very products that Nestlé sells.

This SBP guide directly contradicts the official guidelines issued by the government of Brazil in the "Guia Alimentar para a População Brasileira: (Food Guide for the Brazilian Population) published in 2014, and the "Guia Alimentar para Crianças Brasileiras Menores de Dois Anos" (Food Guide for Brazilian Children Under Two Years of Age) published in 2019.

Nor does the SBP guide make any mention of maltodextrin in its list of sugars to avoid for children under the age of six months, a high glycemic carbohydrate present in many ultra-processed foods, such as those from Nestlé.

“There is no mention of the (official) guide, and not only of the guide as a document, but of its fundamental concepts,” Inês Rugani, associate professor at the Institute of Nutrition at the Rio de Janeiro State University, who coordinated the publication of the government guide, told O Joio e o Trigo, an investigative website in Brazil. “This document only reiterates what we observe: how much the industry presence compromises the independence of a technical document.”

“SBP's Nutrology material does not talk about the importance of eating together, the issue of screens, the challenge of healthy eating for children,” Ana Carolina Feldenheimer, professor at the Department of Social Nutrition at the same university, who also worked on the official guidelines, told O Joio e o Trigo. “A topic that would be great to talk about is children's snacks, which is where ultra-processed foods come in.”

SBP claims that corporate sponsorship has not influenced its materials. “All sponsorship that takes place in this century-old institution is done in an ethical manner and scientific activities are always based on up-to-date evidence,” the organization said in a statement to O Joio e o Trigo.

In 2010, the company launched the Nestlé Até Você a Bordo (Nestlé Takes You Onboard) a floating supermarket that delivered tens of thousands of cartons of ultra-processed foods like milk powder, chocolate pudding and candy to isolated communities in the Amazon basin. The boat operated once a week and sold the goods at cheaper rates than the local market. Nestlé took the boat out of service in 2017 but private boat owners have since taken over to fill the demand.

“When they proposed a floating supermarket, the only one in the world, I was sold,” Graciliano Silva Ramo, who used to manage the boat, told the BBC. “At first, I was proud of my work both what I did on the project and for the riverside population who are poor and need a lot of help. Especially quality food, the river was my life for seven years.”

Soon Silva Ramo realized his error. “The children's diet got a lot worse, the children health suffers a lot from this. They didn't eat healthy food which caused all sorts of illness, like stomach problems and tooth decay,” he told the BBC.

Nestlé claims that it meant well. “The boat program had been aimed at broadening access too food and beverages and promoting social development projects in remote communities,” the company said in an official statement to the BBC. “Nestlé recognizes the challenges of malnutrition including obesity. In Brazil alone it has spent more than £50 million in the last five years developing healthier choices producing food with more whole grain, fiber and protein and less sugar, saturated fats and sodium.”

The company also works directly with nutritionists who market the company’s products to children. For example, in 2019 a nutritionist named Paula Castilho distributed free Nesfit samples (a Nestlé cereal high in sugar) with pamphlets focused on the importance of fiber consumption for a healthy lifestyle at a school in São Paulo. The document recommended consumption of Nesfit “for breakfast, snacks, add it to fruit, milk, yogurt, cakes or just eat it pure!”

Initially, Nestlé denied knowing that its products were being given away by the nutritionist, but later the company admitted that it would have been informed “that the samples would be distributed to the parents of students at a school.”

Nestlé Brazil has also campaigned heavily against government regulation that might inhibit its sales. For example, back in the 1970s, Nestlé was the target of a global boycott for aggressively marketing infant formula all over the world that undermined breastfeeding health recommendations. (The World Health Organization recommends breast milk as the healthiest food for children up to two years of age, because it contains antibodies and other substances that protect the child from common infections, while also developing affective bonds with the mother and family)

At the time Oswaldo Ballarin, president of Nestlé Brazil, traveled to Washington DC to testify in front of the U.S. Senate, to say that the criticism was aimed at “undermining the free enterprise system.”

More recently, in 2006, when the Agência Nacional de Vigilância Sanitária (ANVISA or the Brazilian Health Regulatory Agency) attempted to curb the growing obesity rates with a new law that imposed marketing restrictions and required companies to post alerts to warn consumers about foods high in salt, saturated fats and sugar, Nestlé fought back.

The Associação Brasileira da Indústria de Alimentos (ABIA or the Brazilian Association of Food Industries) a lobbying group with executives from Nestlé, Cargill and Unilever on its board of vice presidents, campaigned heavily against the proposal, paying academics to write newspaper editorials and appear on television to recommend that exercise and better parenting were more important that laws.

Four years later, ANVISA withdrew the proposed rules, keeping in place only a requirement that advertisements include a warning about unhealthy food and beverages.

By contrast, neighboring Chile, which adopted the world’s strictest regulations to combat obesity in 2016 saw sales of sweet drinks plummet 25 percent in just 18 months. Products that contained too much sugar were required to post a black logo, shaped like the international red stop symbol. Schools were required to ban all junk food and companies had to stop using cartoon characters like Tony the Tiger to promote unhealthy food. Similar laws have been adopted in Peru, Mexico and Uruguay.

The laws have had an impact. Even Nestlé, which campaigned heavily against the new laws, decided to act, and slashed the amount of sugar in its products in Chile in order to avoid having to post a black logo.

But in Brazil, Flávio de Souza, Nestlé's vice president of government relations, said in 2019 that his company would reject the Chilean model of regulation. "We will never accept it and we will go to the end. Let's go all the way. We will do what we have to do."

Unfortunately for Nestlé, even in Brazil, the rules have finally begun to change – a new law passed in May will require companies to put warning labels on packages with high fat and sugar content.

However, as leaked documents revealed by Joio and the Intercept Brazil show, companies like Nestlé, represented by the ABIA, lobbied heavily to reduce the effectiveness on the labeling. Against recommendations given by scientists, who suggested the labels adopt a similar model as in Chile, it appears ABIA succeeded in getting authorities to adopt a less clear label. Authorities also extended the deadline by which products have to comply by the new regulations by up to five years, which could be as a result of industry lobbying.