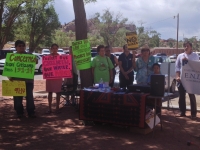 The Navajo DinÃ© community have notched up a victory over Uranium Resources Inc. decades old plan to dig for uranium at Crownpoint and Churchrock, New Mexico, by successfully appealing a state permit for the Colorado company to dump waste into the Westwater Canyon aquifer.

The proposed mine has been opposed by the Eastern Navajo DinÃ© Against Uranium Mining (ENDAUM), a grassroots tribal group, on the grounds that it could contaminate the groundwater for some 15,000 people who live in the region.

"As a resident and former miner, I have experienced the effects of uranium exploitation first-hand. Many of my relatives and neighbors, including myself, have suffered health problems due to working at or living near the mines," Larry J. King, a board member for ENDAUM wrote in a 2012 petition on Change.org. "The Colorado plateau of New Mexico still bears the unhealed sores of the uranium boom of the last century - radioactive waste piles, contaminated water and hundreds of mines on Navajo land abandoned by companies looking to make a quick profit."

Mining for uranium hit a peak during the Cold war when the U.S. was building and testing nuclear bombs to use against the Soviet Union. Price collapsed after the boom ended but started to climb again some 15 years ago when developing countries like China and India started to expand their nuclear power programs, touching off a scramble for new exploration.

One of the biggest known deposits lies under the 27,000 square miles of Navajo territory which extends over the states of Arizona New Mexico and Utah. Indeed Mark Pelizza, a vice president of Uranium Resources Inc., once referred to the region as "the Saudi Arabia of uranium." The company hoped to tap an estimated 42 million pounds of uranium over 20 years worth over a billion dollars at today's prices.

But access to this mother lode has been limited by the Navajo tribe which recently passed a law to ban uranium mining. "I don't want to subject any more of my people to exposure to uranium and the cancers that it causes," Joe Shirley Jr., the Navajo Nation president, said when he signed the DinÃ© Natural Resources Protection Act in 2005. "I believe the powers that be committed genocide on Navajo land by allowing uranium. As long as there are no answers to cancer, we shouldn't have uranium mining on the Navajo Nation."

Unfortunately the Navajo don't legally control the land that lies outside the borders of the reservation that has been allotted to them. Crownpoint and Church Rock come under the jurisdiction of the U.S. government which has issued mining licenses to several companies.

Uranium Resources, Inc. proposed to use in situ leach mining techniques which local activists say poses a major hazard. "The type of uranium mining (URI) is proposing would contaminate potable water with radiation and heavy metals, making it unfit for consumption forever," says Eric Jantz, a lawyer with New Mexico Environmental Law Center (NMELC) that helped ENDAUM fight the mine.

While the company had a valid license to mine for uranium, it still faced other obstacles. The company's state permit for dumping waste water had expired in 1996 and the New Mexico Environment Department had delayed the renewal pending a variety of lawsuits.

Then in October 2015 New Mexico finally gave the company the go-ahead. The two activist organizations immediately challenged the renewal pointing out that the permit allowed contamination at 5,000 micrograms/liter, which was in violation of the state's newer 2004 uranium groundwater standard of 30 micrograms/liter.

The activists are not out of the woods yet. The federal U.S. Environmental Protection Agency still provides exemptions to the mining, oil and gas industry that allow them to contaminate aquifers.

This week NMELC joined forces with the Natural Resources Defense Council to demand that this exemption be repealed. "New Mexico's desert climate makes water precious for everyone," said Eric Jantz, staff attorney at the New Mexico Environmental Law Center. "Rural low-income, minority and indigenous communities, though, rely almost exclusively on groundwater for drinking water, and are hit particularly hard by groundwater pollution from industries like oil and gas development and uranium mining." 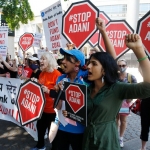 Cricket – easily India’s favorite sport with over 760 million viewers tuning into televised matches every year – is always a major event across the subcontinent. Read More