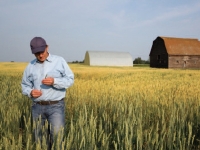 Does Monsanto own all future generations of
genetically modified seeds that it sells? The Missouri-based
agribusiness giant wants farmers to pay a royalty to plant any seed that
descended from a patented original. The legal decision has ramifications for
other patented "inventions" that reproduce themselves like strands of
DNA.

The U.S. Supreme Court appeared to side with Monsanto in oral arguments heard this past February in a lawsuit that the world's largest seed company has brought against Vernon Hugh Bowman, a 75 year old farmer in Indiana, who grows corn, soybeans and wheat on a small farm of 600 acres (242 hectares).

The impending court decision, which will probably come this June, has sparked alarm among consumer advocates.

"Judges don't understand agriculture," says Bill Freese, science policy analyst for the Center for Food Safety, a Washington DC based watchdog group. "The Monsantos of the world have everyone convinced through a massive misinformation campaigns that biotech crops are essential to feed the world, and patents are necessary for biotech crops. So there's this patina of virtuous innovation when in fact what biotechnology is really used for primarily is to develop pesticide-promoting crops."

The crop in question is Roundup Ready soybeans, which are genetically-altered to be resistant to glyphosate, the main chemical in Roundup, a pesticide also manufactured by Monsanto.

Bowman first fought back when Monsanto sued him in 2007 for patent infringement. At the time, Bowman was a regular Monsanto customer. Like the 275,000 other U.S. farmers who buy "Roundup Ready" seeds, Bowman bought his seeds from Monsanto and signed a contract stating that he would not save Roundup seeds to replant. He didn't.

But from 1999 to 2007, in addition to his usual order of Roundup Ready soybeans for seed, Bowman purchased commodity-grade soybeans, called "commodity grain," from a local grain elevator where farmers like himself sell their crops. Typically, commodity grain is used for animal feed. Bowman, however, decided to use the commodity grain - a mix comprising of many different varieties of soybeans including some Roundup Ready seeds - to plant a second, lower yield soybean harvest later in the season.

"What I wanted was a cheap source of seed," Bowman told National Public Radio, a U.S. network.

Roundup Ready was first marketed in 1996, and it was a hit with farmers in the U.S., the largest producer of genetically modified food in the world. These days, more than 90 percent of U.S.-grown soybeans are Roundup Ready, Monsanto said in court documents. As a result, organic farmers say, it's getting harder to find diverse strains of traditional, heirloom soybeans.

Therefore, it's no surprise that some of the soybeans Bowman took home from the grain elevator contained Monsanto's patented soybeans. For eight years, Bowman planted the commodity-grade soybeans for his second harvest, sprayed Roundup on them, harvested the plants that grew and kept the seeds they produced to plant later. It's these "third generation" seeds that are at the heart of the Supreme Court case now.

Bowman saw nothing wrong with what he was doing. "All through history we have always been allowed to go to an elevator and buy commodity grain and plant it," he told the New York Times.

Not any more, if companies like Monsanto who control most of the global commercial seed market, have their way. The big seed companies use a strategy to attack seed savers that consists of three stages: "investigations; coerced settlements; and, if that fails, litigation," says the Center for Food Safety.

To date, in the U.S., Monsanto has sued 410 farmers and 56 small farm businesses for alleged seed patent violation. Monsanto has won every single case. The company was awarded nearly $24 million from just 72 of those judgments, the Center for Food Safety found.

"As early as 2003, Monsanto had a department of 75 employees with a budget of $10 million for the sole purpose of pursuing farmers for patent infringement," the Center for Food Safety stated in a new report, "Seed Giants vs. U.S. Farmers." "Agrichemical companies earn billions of dollars each year, and farmers cannot possibly compete against such resources."

"Patents are necessary to ensure that we are paid for our products and for all the investments we put into developing these products," the company states on its website in its defense. "Monsanto invests more than $2.6 million per day in research and development that ultimately benefits farmers and consumers. Without the protection of patents, this would not be possible."

The Center for Food Safety wants federal, state and local governments to work together to regulate the biotechnology industry, using a law passed by the U.S. Congress in 1970 as a guideline. The 42 year old Plant Variety Protection Act allowed intellectual property laws to be applied to new and distinct plants.

But it had an exemption for farmers to save seeds of such plants and replant them so long as they do not resell the seed. Plant breeders are also allowed to use protected seed for further breeding work. The law was designed to protect one seed company - say Monsanto - from another - like DuPont. This law did not view farmers as competitors to companies.

In 2001, the U.S. Supreme Court ruled that non-hybrid plants could be patented. The final decision was written by Justice Clarence Thomas, who incidentally  worked as an attorney for Monsanto in the 1970s. Since then, courts have tended to side with seed companies suing for patent infringement.

"This (Plant Variety Protection Act) has been largely sidelined now by the patent system," says Freese. "Now companies with patents have this inordinate control over seeds, and they can criminalize seed saving.

Bowman spent $31,000 of his own money on legal fees before a law firm agreed to defend him for free. If Monsanto wins the case against him, he'll have to pay almost $85,000 to the corporation, which made $7 billion in profits in fiscal year 2012.

Bowman's legal argument rests on a 150-year old Supreme Court common law known as the "patent exhaustion doctrine." His lawyer, Mark P. Walters, argued that Monsanto's patent did not apply to seeds descended from Roundup Ready soybeans that were then sold to a grain elevator and mixed with other soybeans.

Monsanto contended that Bowman, by growing and saving seeds from the commodity soybeans he bought from the grain elevator, was making "copies" of the original, patented Monsanto product.

Two lower courts agreed with Monsanto. In 2009, district court in Indiana awarded the company more than $84,000. The Court of Appeals for the Federal Circuit, which specializes in patent law, upheld the decision in 2011.

In October 2012, the Supreme Court agreed to hear the case, despite objections made by the Obama administration, which said the judges should let the previous rulings stand. The U.S. government filed a friend of the court brief in support of Monsanto, stating that "the Court's decision could also affect the enforcement of patents for man-made cell lines, DNA molecules, some nanotechnologies and other technologies that involve self-replicating features."

Not surprisingly, the Biotechnology Industry Organization, the Business Software Alliance, Intellectual Property Owners Association and other industry and research groups also filed friend of the court briefs on Monsanto's side.

On February 19, Supreme Court justices heard both sides of the case.

"Without the ability to limit reproduction of soybeans containing this patented trait, Monsanto could not have commercialized its invention, and never would have produced what is, by now, the most popular agricultural technology in America," Monsanto's lawyer and former U.S. solicitor general, Seth P. Waxman, told the court.

Waxman was allowed to talk uninterrupted at length, "which is usually a sign of impending victory," the New York Times reported.

In contrast, the justices fired a volley of skeptical questions at Bowman's attorney, Mark P. Walters. When Walters argued that Monsanto's patent didn't apply to subsequent generations of seeds after the initial sale, Antonin Scalia, another judge, interrupted him.

"Why in the world would anybody spend any money to try to improve the seed if, as soon as they sold the first one, anybody could grow more and have as many of those seeds as they want?" Scalia asked.

Later, Walters argued that Bowman was "making use" of the commodity grain that he bought on the open market when he planted it, not making a copy of an original Monsanto seed. He was rebuked by Stephen Breyer, another of the judges.

"If the concept is the sale of a parent plant exhausts the patentholder's rights... we would have to go all the way back to the very first Roundup Ready plant that was created," said Melissa Arbus Sherry, the lawyer representing the Obama administration. "Every single Roundup Ready seed in existence today is the progeny of that one parent plant and... that would eviscerate patent protections. There would be no incentive to invest, not just in Roundup Ready soybeans or not even agricultural technology."

Walters believes there is still a possibility that the Supreme Court could reverse the decision or send the case back to the lower courts for retrial. He said three of the justices appeared to sympathize with the idea that a farmer ought to be able to sell, plant or grow new seeds from ones he buys on the open market.

"There are many interests: biotech, seed companies, large and small farmers. They're not aligned," Walters told CorpWatch. "Small farmers are not very well organized. They're not a strong voice in Congress. Right now one company with a particular stake is trying to make a case based on a set of particular facts."

Both Walters and Freese agree that in today's political climate, it would be an uphill battle to pass legislation that would regulate the powerful biotech industry. Last year, Monsanto, other agribusiness and food companies spent more than $45 million to defeat a proposition in California that would have required labels on some genetically modified foods sold at stores.

Meanwhile, Bowman has to drive out of the state of Illinois - to Ohio -  in order to find cheap, non-GMO commodity soybeans he can plant without the threat of a patent infringement suit. Every time, he does this, he passes numerous grain elevators, all of which brim with soybeans.