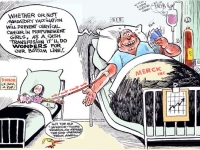 In early January Marilyn Canavan and Andrea Boland, two legislators from wintry Maine, traveled to the tourist resort of Marco Island, Florida, for a conference organized by Women in Government (WIG), a non-profit organization.

The annual, bi-partisan event for elected women in state governments around the U.S. had a number of issues on its agenda from higher education to the state of women in politics.

One focus, preventing cervical cancer, included information on Gardasil a new vaccine manufactured by pharmaceutical giant  Merck, that protects against the two human papilloma virus (HPV) strains that cause 70 percent of cervical cancers.

"The tenor of presentations - they were not discussions ... (they) seemed one-sided to me," said Canavan,  a four-term legislator. "I remember thinking as I was leaving the meeting, 'I just don't want to do this ... we need to have public dialogue.'"

Boland also reported "a pull to get on board [promoting vaccination]... and when I raised questions, the response was 'Do you want your daughter to die of cancer?'"

Boland, a first-time legislator, joined Canavan, a WIG state director, at a small planning session, where she was taken aback by the extent to which corporations influenced WIG. "When discussing what the agenda for next year would be," participants were told to 'wait to see who's funding things.'" Similarly before fixing the program for next year, they "had to see what the sponsors want," said Boland.

Boland's suspicions were further raised by a casual conversation one evening over a glass of wine with one of the conference speakers, Boston pop singer Christine Baze. "She was a young attractive woman with a beautiful voice and a moving tale of surviving cervical cancer," said Canavan. Baze mentioned that a pharmaceutical company had paid for her appearance.

Both legislators believed that preventing cervical cancer was a worthy project, but it wasn't until a month later that Canavan and Boland learned that, more than making the vaccine available, Merck and WIG were campaigning to make Gardasil mandatory for all 11-12 year old girls.

Then, after the governor of Texas, Rick Perry, passed an executive order mandating vaccination for all girls entering sixth grade, Canavan learned something that shocked the former director of the State Ethics Commission: She discovered that WIG had taken funding from Merck.

On March 2nd, Canavan resigned from WIG. "An organization that stands to profit, like a pharmaceutical company, shouldn't be driving the health agenda in public realm," said Canavan. "You see so many front organizations, I'm not going to say Women in Government is one, but it matters who's funding them. My early training emphasized doing the right thing and being guided by conscience."

What Boland and Canavan had come to realize was that the Florida conference presentations had been part of a state-by-state lobbying campaign spearheaded by WIG to support Merck's efforts to make Gardasil mandatory. WIG members were well placed to promote bills in state legislatures or help convince governors to promote that agenda. But revelations of money trails and the rush to make a new vaccine mandatory created a backlash and forced Merck, on February 20th, to publicly abort its lobbying campaign for mandatory vaccination of school girls.

Cervical cancer affects 10,000 women in the United States every year, and kills 3,700. The toll is far greater in the developing world, where most women lack the diagnostic Pap tests that catch signs of cancer when it is still treatable.

New Jersey-based Merck, one of the world's largest pharmaceutical companies had been hoping to reap billions of dollars from Gardasil. Most of the world's sexually active men and woman and every child over 9 years of age are potential customers for the expensive course of injections.

A quick and successful launch was crucial, both for Merck's failing financial health and because rival GlaxoSmithKline was developing a similar HPV vaccine. Things looked good for Merck when the U.S. Food and Drug Administration (FDA) agreed to fast-track Gardasil in February 2006 and approved it in June, pronouncing the vaccine effective and safe for girls as young as nine. Soon after the FDA approved Gardasil, WIG was helping introduce bills in some 20 states, with Merck actually writing the legislation in at least one state: Florida.

Merck also launched a subtly frightening advertising campaign featuring quick images of vital young girls: a young drummer, a child with a skateboard, two playing basketball, and three skipping rope. The drummer says: "I want to be one less woman who will battle cervical cancer," as she starts tosses her drumsticks and starts to play, the others spell out a chant: : "O-N-E-L-E-S-S. I want to be one less. One less."

Merck's targeting of young girls and eventually boys who are carriers and on rare occasions develop HPV-caused cancers is based in rational public health principles. Since the vaccine is only effective in preventing, not treating HPV infection, it needs to be dispensed before exposure to the viruses. And while 11-12 year old girls are unlikely to be sexually active, policy makers could make their entry into middle school contingent on vaccination in the same way that 5-6 year olds are required to be vaccinated for polio and measles before entering elementary school. If officials waited until the more common age of sexual initiation, around 16, public health officials would not have the leverage to compel vaccination.