Mapuche Lands in Patagonia Taken Over by Benetton Wool Farms 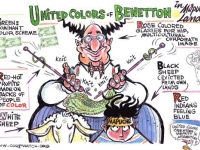 In Patagonia, turquoise rivers divided by wire fences are a common sight. The snow capped mountain range in the southern Andes that runs along the border of Argentina and Chile, or the Cordillera as the locals call it, is one of the most pristine in the world. Under the mountains lies flat earth filled with bushes and vegetation that sheep and cattle graze on. The gold and quartz inside the mountains of Argentina's southern province of Chubut have recently brought in mining companies such as Meridian Gold, and now Benetton, for its exploitable and vast plains - perfect for the mass production of wool.

To the Mapuche Indians in southern Argentina, the Italian clothing manufacturer Benetton is the newest conquistador in 10,000 years of land struggles in Patagonia. Today Benetton is the largest landholder in Argentina, owning 900,000 hectares (2.2 million acres) in the resource-rich region of Patagonia. With 9% of Patagonia's most cultivatable land, their holdings amount to 40 times the size of the capital city of Buenos Aires, the second largest city in Latin America.

"Here they fenced off all that they wanted. If it was a pretty valley, for that reason they appropriated it, if it was beautiful pampas, they closed it out. They left us among the stones, among the worst fields" says a Mapuche farmer Rogelio FermÃ­n.

"Patagonia gives me an amazing sense of freedom," said Carlo Benetton when assuming ownership of the Argentinean territory. In 1997 Benetton bought out the British-owned Compania Tierras del Sur Argentina S.A. (CORP) for a total of $50 million. The records of CORP acknowledge the presence of indigenous people in the area. In return for the land that has been occupied by Mapuches for 13,000 years, Benetton constructed the Leleque museum, located in front of the Benetton estate in Chubut, to "narrate the history and culture of a mythical land."

But Benetton's occupation of Argentina land reaps more than just a personal sense of freedom and museums of the past: Benetton's 280,000 sheep produce 6,000 tons of wool a year, 10% of the production needs of the world's biggest consumer of virgin wool.

Two hundred meters away from the Leleque Museum live a Mapuche family called the CuriÃ±ancos. Atilio CuriÃ±anco was born and raised in Leleque, but later moved to neighboring Esquel. After suffering from Argentina's economic crisis in December 2001, Atilio and his wife Rosa decided to return to the fields, and attempt to grow their own food, raise animals, and establish a micro-enterprise.

"It all started when we proposed to start a family enterprise in Santa Rosa," says Atilio CuriÃ±anco, age 52. "I have known that land since I was born, and I saw that nobody occupied it, so we thought it would be a good opportunity."

The CuriÃ±ancos contacted the Instituto AutÃ¡rquico de Colonizacion (IAC), a government-managed real estate agency, to request permission to occupy an estate called Santa Rosa, situated in front of one of Benetton's properties. The land is well known to the Mapuches as unoccupied indigenous territory and was verbally confirmed as such by IAC. After waiting 8 months, the CuriÃ±ancos hadn't received a response about the Santa Rosa property. Finally IAC presented a note to the family saying "information has been obtained that leads us to believe that the property is zoned commercial" and that "our interest is to reserve it for a micro-enterprise."

The CuriÃ±ancos showed up at the Esquel Police station in Chubut to make it known that they would occupy Santa Rosa. In the same afternoon, a group of campesinos began to work the land with the little resources they had -- plowing, sowing vegetables, and bringing in farm animals.

"We went to land without harming anyone," says Atilio CuriÃ±anco. "We didn't cut a fence, we didn't go at night, we didn't hide ourselves. We waited for someone to come to let us know if it bothered them, to present us with a document that the land belonged to someone, and no one ever showed up."

The local Benetton office maintained that the Santa Rosa estate was company property. Benetton issued a report claiming that the estate "is not to be used for cattle raising" and stated their intentions to take control of the property. After two months of land occupation, the police dismantled and seized the belongings of the CuriÃ±anco family.

When questioned about the eviction, Benetton lawyer Martin Iturburo Moneff says that the land takeover by the Mapuche family was simply a problem of "common delinquency."

The Benetton land surrounding the Santa Rosa property continues to be unoccupied. The CuriÃ±ancos say that they will return to the land that was taken away from them, and refuse to let Benetton redraw the lines of their history. "As indigenous people, we are going to fight until the end until this land is ours," says Atilio.

Across the dusty highway from the Santa Rosa property, Atilio's mother, 85 year-old DoÃ±a Calendaria, has to jump the fence of the Benetton property to access water from the areas only stream.

"The way to the Chubut River is a local road. That shouldn't be closed," says Laura, a resident of the region for 40 years. She describes how the area changed when Benetton bought the land in 1991.

"[Benetton] has three gates with keys, and to enter you have to request permission from them, and you can't fish unless you have permission, because they don't let you. Towards the end of the property there are some families, but they can't leave through the Benetton property. They have to go around it, a 90 kilometer trip."

Leleque is a village made up of eight families who worked for the Argentinean railroad company loading wool, leather and other goods for transport to the capital city. In 1992, a year after Benetton bought the surrounding property, the loading station in Leleque was closed. "This used to be a beautiful town, but now it looks like a graveyard," says Calendaria's neighbor, Pigeon Llancaqueo.

When the loading station was shut down, running water for the families was cut off and police stopped serving the area. The local cemetery is now part of the Benetton estate, in the yard of the Leleque Museum. Without work, potable water or land to grow food, the Leleque residents only had their animals to help them survive. At the end of September 2003, the state passed a resolution prohibiting the Leleque residents to have animals.

In September of this year, the 50 Leleque residents, the majority of whom are Mapuche women and children, were told by the state-owned railroad company that they had three months to abandon their houses to make way for a tourist attraction, which would use the very houses that they occupy.

The tourist project, supported by the county of Chubut, involves reactivating the railway for a guided train tour of Patagonia. Although provincial officials deny that the project has any relationship with the Italian company, one of the central offers of the tour is to visit the Benetton property. The official slogan of the tourist project describes "a true trip through the region's origins, leaving from El Maiten heading towards Leleque, where [tourists] will also visit the Museum Leleque, where one can enjoy a Patagonian asado [typical Argentine food] at the Benetton estate."

Upon the eviction of the Leleque residents, a school house for 18 students will also be shut down. Although the state promises housing for the evicted residents, it is not guaranteed. "I don't like to use the word eviction," says Miguel Mateo, spokesperson for the Ferrocarril Provincial del Chubut (Provincial Railroad Company of Chubut). "It implies that the people are being thrown out into the street."

In the face of eviction, the residents of Leleque have begun to organize. They point out that the local communities have been integrated into other tourist enterprises at other train stations in the area, such as in Nehuelpan. The difference, they say, is that those stations are not surrounded by Benetton lands.

"Little by little, they have been closing the door on the Leleque community. It's a very strategic plan," says Mauro Millan, spokesperson for Mapuche organization 11 de Octubre. "Up until now, we have been defenseless but now we are in the era where the Mapuches are on the offensive. We have decided that there won't be any more evictions -- from the state or from Benetton."

Benetton around the world

The Benetton Group was founded in 1965 by the Northern Italian Benetton family, which maintains a majority state in the company. Benetton not only has clothing outlets in 120 countries, but also owns freeways, urban catering services, and telecommunications companies in Europe, and real estate and agriculture around the world. With a total of 7,000 retail stores, an annual production of 100 million garments, Benetton's average yearly revenue is 2 billion Euros. The company is famous for its controversial advertisements, depicting AIDS victims and death row inmates among other gripping images, which promote social responsibility and multiculturalism. Yet, Benetton's labor and political practices provide a stark contrast to its PR message.

Benetton was the center of a child labor scandal in Turkey in 1998, when several children ages 11-13 were photographed working at the Bermuda Tekstil factory in Istanbul, a textile plant that produces Benetton line clothing. Turkish law and the international labor convention forbid the work of children younger than 14. Benetton suspended its dealings with the subcontractor after the violations were reveled by a Turkish trade union.

Benetton found itself again in a storm of controversy when the Kappa Company, partially owned by Benetton, proposed a clothing-manufacturing center in the Occupied Palestinian Territories in the late 1990's. After a human rights groups campaigned against the plan, warning of its violation of international agreements set up by the Fourth Geneva Convention regarding enterprises in the OPT, Kappa finally rescinded its plan.

Just last year, the Consumers Against Supermarket Privacy Invasion and Numbering launched a boycott campaign against Benetton, for its plan to use one million Radio Frequency Identification Chips, or RFIDs, for inventory purposes in its clothing. Benetton dropped the plan after critics voiced concern that the devices placed within clothing items could potentially allow the manufacturer to track the movements of its customers.

Sebastian Hacher is an Argentinean independent journalist and photographer who works with Indymedia Argentina. Pauline Bartolone is a reporter for Free Speech Radio News currently based in Argentina.