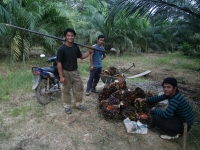 IOI, the second largest producer of palm oil in Malaysia, has been kicked out of an industry group that certifies sustainability practices, for environmental and labor violations. As a result, dozens of companies, including the makers of Dove soap, M&M's and Kellogg's Corn Flakes, have stopped buying from IOI.

The company was named as a probable culprit in deforestation in an in-depth report on Unilever titled 'Burning Up Borneo' published by Greenpeace in 2008 that examined satellite data of habitat loss.  Subsequently the company was also named in two reports by Finnwatch titled 'The Law of the Jungle' and 'The New Law of the Jungle' which looked at environmental issues as well as working conditions of plantation workers in Indonesia and Malaysia.

In April 2015, Aidenvironment, a Dutch organization, lodged a formal complaint against the company at the Round Table on Sustainable Palm Oil (RSPO) for misleading claims on its sustainability practices, which was finally upheld last month. Ironically, IOI was a founding member of RSPO.

"IOI's suspensions follow our attempts over a six year period to see IOI live up to its own ambitious sustainability policies and action plans," said Eric Wakker, the director of Aidenvironment Asia, in a press statement. "Aidenvironment and others have repeatedly demonstrated that IOI('s claims are) simply too Green to be true.'"

Environmentalists first become concerned about palm oil some 20 years ago, after agribusiness companies started evicting forest dwelling communities and chopped down primary rain forests in an effort to set up huge monoculture plantations notably in Indonesia and Malaysia. In their effort to clear the land throughly, the companies also set fire to the residue after removing the more valuable timber. The haze from those forest fires soon began to interrupt regional air traffic and caused severe respiratory illnesses in Indonesia, Malaysia as well as Singapore.

Once activists realized that palm oil, a product of the oil palm tree from West Africa, had become a key ingredient in a number of household products from cosmetics like shampoo and lipstick to foods like icecream and snacks, they started to campaign against buyers. RSPO was created in 2004, mostly by industry, to create a certification system to respond to those concerns.

Over the years, the RSPO has been accused of being too close to industry members, so the suspension of IOI took many by surprise.

The company reacted quickly to the announcement. "We wish to assure all our stakeholders that after the complaint was made to the RSPO one year ago, we have taken corrective actions to review and enhance our sustainability practices," Lee Yeow Chor, the CEO of IOI, said in a statement to the media.

But activists say the company's actions have been empty. "So far, IOI appears to have shown little sign that it understands the seriousness of the situation," wrote Kiki Taufik, the head of Greenpeace's Indonesian forests campaign in the Guardian. "Best practice ... means introducing an immediate moratorium on all plantation development across its supply chain, before moving quickly to protect and restore the forest and peatland landscapes it has damaged. Companies should hold out for transformative action on this scale before resuming purchases from IOI."

And buyers have finally taken the allegations seriously. Unilever announced that it would stop buying from IOI on March 31. "Unilever takes the allegations against IOI and its suspension from the RSPO extremely seriously, the company said in a press statement. "This suspension puts IOI in breach of our policy. In line with our grievance procedure, we are now in the process of disengaging with the supplier and have set a time bound plan to do this over the next three months." This was followed by dozens more including Colgate-Palmolive, Hershey's, Johnson & Johnson, Kellogg, Mars, Nestle, Procter & Gamble, Reckitt Benckiser, SC Johnson and Yum! Brands.