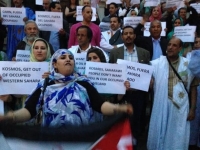 Kosmos Energy, a Texas oil company, is preparing to drill for oil in Western Sahara, a disputed territory currently controlled by Morocco. The company has dispatched a state of the art oil rig to begin operations later this year, according to Western Sahara Resource Watch (WSRW), an activist group.

Ever since an unusual tripartite governance agreement over Western Sahara was signed between Spain, Mauritania and Moroco in 1975, the indigenous Sahrawi people have been fighting for independence. The Spanish withdrew in 1976 (after 92 years of colonizing the territory) followed by Mauriania in 1979. The United Nations has attempted to resolve the status of Western Sahara, but the Moroccans have refused to withdraw, leading to bloody clashes with the Polisario independence movement for almost 40 years.

Morocco first awarded licenses to drill to Kerr McGee of Oklahoma and TotalFinaElf from France in 2001 but the companies bowed out following pressure from human rights groups. (see list below) On December 19, 2013, Morocco signed an agreement with Kosmos giving them permission to explore for oil in the Sahara region.

Earlie this year, Kosmos dispatched a vessel named the BGP Prospector to conduct seismic studies off the coast of Western Sahara. After the surveys were completed, the company arranged for the Atwood Achiever, an oil rig built in South Korea, to go to Cap Boujdour, the block where Kosmos hopes to drill for oil. The oil rig is now in Singapore and is expected to arrive in Western Sahara in a few weeks.

"If they find oil, it will turn things upside down," says Erik Hagen of WSRW.

Community activists are more blunt. "In a few weeks time, the rig may permanently damage the Saharawi people's aspirations to freedom and independence, as it commences unethical and illegal oil drilling in Africa's last colony," the Sahrawi Center for Media and Communication (SCMC) said in a letter to the company. "All your negotiations and deals were conducted with the Moroccan authorities and not the Sahrawis. This can only mean lack of respect for the rights of the people."

The company says the opposite is true. "Some experts believe discovery of oil offshore could lead to a resolution of the conflict, after 40 years of ongoing dispute," Bill Hayes, Kosmos senior vice-president, told the Financial Times.

However, the Kosmos claim contradicts a January 2002 legal opinion, written on behalf of the United Nations, that states that "if further exploration and exploitation activities were to proceed in disregard of the interests and wishes of the people of Western Sahara, they would be in violation of the principles of international law applicable to mineral resource activities in Non-Self-Governing Territories."

Indeed Ambassador Hans Corell, who authored the opinion when he was legal counsel of the United Nations Security Council, has weighed in with the activists. "There is no proper consultation with the representatives of the Sahrawi people and Morocco does not allow the Sahrawi to organise themselves politically," he told the Financial Times. "The more resources are found in Western Sahara and its maritime zone, the less will be the incentive for Morocco to fulfil the UN resolutions and international law."