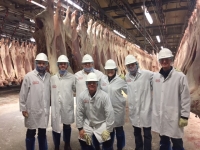 In July 2020 Maria Aparecida de Souza visited the JBS slaughterhouse outpatient clinic in Sidrolândia, in the southern Brazilian state of Mato Grosso do Sul, to complain of body aches and a cough, afraid that she might have caught COVID-19, according to Brasil de Fato, a Brazilian news site.

Unable to detect a fever, the clinic doctor sent Aparecida de Souza away without performing a COVID-19 test. She returned to work at the slaughterhouse where she had worked for 21 years cutting and deboning chickens. Two days later, she returned to the clinic reporting that she was having a hard time doing her regular job, so she was admitted to be treated for COVID-19. A month after reporting her first symptoms, de Souza passed away.

“Even before my mother died, someone else had been put in her place. It's like they say: the cheapest meat is that of the worker,” Joana Darc de Souza, her daughter, told Brasil de Fato. “When my mother was working, she was an excellent employee. When she got sick and died, they didn't even want to know how we were.”

JBS, the largest meat processing company in the world, with sales of US$76 billion in 2021, was founded by José Batista Sobrinho, a rancher in Anápolis, Brazil, in 1953. Over five decades, it expanded across Brazil. In 2005, JBS decided to go global and started to buy up other companies in the region and then eventually in Africa, Asia, Australia, Europe and North America.

Today, the company owns factories in 15 countries and boasts of sales in practically every country in the world, via subsidiary brands like Black Angus Beef and Pilgrim’s. The Meat Atlas, a non-profit publication that tracks the industry, estimates that JBS slaughters 42 million chickens, 170,000 cattle and 350,000 pigs every single week.

While JBS is not a household name outside of Brazil, it has featured at the top of the list of companies linked to environmental destruction in the Amazon rainforest. Multiple reports from NGOs like Amnesty and Greenpeace have repeatedly linked JBS to farmers and ranchers who have been engaged in widespread deforestation.

JBS also has a history of poor safety practices in the workplace. For example, prior to COVID-19, investigative website O Joio e O Trigo calculated that JBS slaughterhouses in Brazil averaged seven work accidents a day between 2018 and 2020 with regular reports of severe injuries and horrific deaths.

After the COVID-19 pandemic began, JBS slaughterhouses became some of the biggest hotspots of illness and deaths in Brazil as well as in the United States, both on the factory floor as well as in the surrounding communities, with a disproportionate impact on the minority communities that worked in these facilities.

For example, a JBS plant in the Brazilian city of São Miguel do Guaporé in the state of Paraná, was forced to close twice in the early months of the COVID-19 pandemic, after witnessing a huge outbreak at its facilities. After the plant reopened the first time, the number of infections in the municipality increased by 1,000 percent within the space of just 20 days. Given that it was the largest employer in the area and the only one operating at the time, local authorities ordered the plant shut down again in June 2020.

A year later JBS was ordered to pay over R$20 million (US$4 million) in damages after the labor court in São Miguel do Guaporé ruled that the company had “neglected to proceed with the immediate distancing of employees from work, when they present suspicious symptoms of COVID-19."

In the city of Dourados in the state of Rio Grande do Sul, a COVID-19 outbreak was reported at a JBS facility where a quarter of the plant’s 4,000 workers tested positive for the virus in June 2020. The illness quickly spread to an Indigenous reservation just outside of the slaughterhouse where infections spiked by 3,500 percent, according to investigative journalism sites Agência Pública and De Olho nos Ruralistas.

“We knew that one hour or another it would arrive and, when it arrived, we would have to be minimally prepared, but we aren’t,” Guarani-Kaiowá, president of the Action of Young Indigenous Peoples of Dourados, told Agência Pública in June 2020. “Now we are at that moment where we don't have time to think.”

When questioned about the Dourados outbreak, JBS told Agência Pública that it “adopts a strict protocol for the control and prevention of the disease in its units” and that it would donate R$21 million (US$4.3 million) to fight coronavirus in Mato Grosso do Sul.

In July 2020, JBS was sued by Sindicato dos Trabalhadores nas Indústrias da Alimentação (Union of Workers in the Food Industry) over the outbreak in Dourados. “JBS limited itself to implementing superficial protection measures, without altering the intense pace of production at its Dourados unit and without reducing the number of workers per shift, in order to facilitate the distance between workers,” Paulo Roberto Lemgruber, the lawyer representing the union, told Folha de São Paulo newspaper.

Local labor courts mostly refused to fine JBS but ruled that if employees in Dourados who tested positive for COVID-19 were not separated from their co-workers or if their salaries were cut, the company would face a fine of R$50,000 (US$9,500) per employee. A labor court in Vilenha in Rondônia state also imposed a similar judgement on JBS with fines of up to R$50,000 (US$9,500) per infraction.

Fines of up to R$1.5 million (US$285,000) were also imposed on JBS for violating the workers’ health and safety by not protecting them sufficiently from COVID-19 in Caxias do Sul and Montenegro in the state of Rio Grande do Sul.

And in Serrinha, also in Rio Grande do Sul, JBS was found guilty of firing 40 Indigenous workers (inluding one who was pregnant) in order to avoid paying sick leave after the company discovered that there were two positive COVID-19 cases in the community. The court ordered JBS to pay the workers 10 months salary plus an extra R$250,000 (US$47,500) in collective damages to the community. Lawyer Lúcia Fernanda Inácio Belfort Sales, who represented the Indigenous workers, welcomed the fines but stated that they were “negligible in the face of the damage caused and widely proven.”

In all these cases JBS denied that it was at fault, stating that it had “adopted a strict protocol for the control and prevention of the disease in its units since the start of the pandemic.”

Mounting cases in the U.S.

Jose Andrade-Garcia, who worked at a JBS facility in Marshalltown, Iowa, told his daughter that he was feeling sick in early April 2020. Like his Brazilian counterpart, Maria Aparecida de Souza, he did not have a high temperature. But within a few days he started to have difficulty breathing and on April 17th, he was taken to University of Iowa Health Care, where he died in isolation a month later, according to a report in the Des Moines Register.

"They had a good idea around the time Dad got sick or even prior," Maria Andrade, his daughter told the Des Moines Register. "I think they had time to take action. I think they could have done more."

In April 2022, the Andrade family sued JBS alleging that the company failed to implement even basic safety precautions such as social distancing, limiting numbers of people, or providing protective equipment such as masks or barriers. The family also said that Andrade continued to work while sick because he feared being fired under the company’s “points” system. “While Jose Andrade-Garcia and his coworkers slaughtered and processed animals for Defendants' corporate profits, they themselves were being led to the slaughter by Defendants' recklessness and greed,” the lawsuit states.

And in a JBS plant in Greeley, Colorado, situated just 12 miles from the headquarters of JBS USA, six workers and a supervisor died and hundreds more were infected throughout the course of the pandemic.

Just as in Brazil, the community surrounding the Greeley plant reported elevated COVID-19 cases. Over 70 residents and staff tested positive at Weld County Intervention Community Correction Services, the local prison in Greeley, where JBS recruits many of its workers. “We've ascertained a significant link between Community Corrections/Work Release and JBS,” Mark Wallace, the director of public health for Weld county told the Midwest Center for Investigative Reporting website.

Indeed, in July 2020, the cases at the Greeley plant amounted to 65 percent of all cases reported in the entire state.

Yet the government failed to properly sanction the company. Data from Violation Tracker shows JBS was fined just US$ 720,000 by the U.S. Occupational Safety and Health Administration (OSHA) for health and safety violations at U.S. workplaces between 2020 and 2021, including just $15,615 for the violations in Greeley. In addition the company was fined another US$14,502 this month for violations of infectious disease safety policies at seven facilities in the early days of the pandemic.

In September 2020 workers from the United Food and Commercial Workers Union staged a protest outside the JBS site in Greeley, holding up signs that read “Shame on OSHA” and “Life is cheap for JBS.” $15,000 “doesn’t even cover one funeral,” Rosario Hernandez, the wife of Alfredo Hernandez, a janitor at the plant who spent nine days in the hospital after contracting COVID-19, told the Associated Press.

Over a year after that pandemic began, a U.S. Congressional report issued in October 2021 concluded that JBS facilities had 225 percent more COVID cases and 210 percent more COVID deaths than the company had originally reported. The report also focused on the JBS plant in Hyrum, Utah, where over half of the employees contracted the disease.

As in Brazil, JBS denied that it was at fault. “The health and safety of our team members always comes first and our response since the onset of the pandemic has demonstrated that commitment, with an investment of more than US$760 million to date,” JBS spokeswoman Nikki Richardson said in response to the report. “We have taken aggressive action to keep the virus out of our facilities and adopted hundreds of safety measures that often outpaced federal guidance and industry standards.”

Yet at the very same time, evidence has recently surfaced that the CEOs of JBS, Smithfield and Tyson also made a secret joint call in April 2020 to Sonny Perdue, the U.S. secretary of agriculture at the time, to successfully urge him to keep meatpacking plants open during the pandemic. JBS has also aggressively fought any request for worker’s compensation over COVID-19 in the Colorado and Iowa, arguing that it could not be proven that the workers caught the illness at their workplaces.