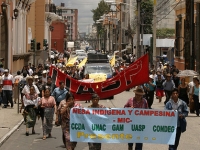 Six demonstrators were killed and dozens injured when the Guatemalan military fired into a group of indigenous Maya-K'iche' gathered on the Inter-American highway to protest rising electricity charges from Energuate, a major national power company owned by a private equity firm created by the UK government.

The demonstrators, who had gathered on the highway some 170 kilometers west of Guatemala City, were from TotonicapÃ¡n, one of Guatemala's most impoverished departments (provinces). Malnutrition is widespread and the price of electricity is prohibitively expensive in the region. The World Bank estimates 75 percent of Guatemalans live in poverty with 58 percent of the population living in extreme poverty.

"We were protesting right next to [the military] when they opened fire on us," Rolando Carrillo, a 25 year old demonstrator with injuries to his hand and his face that he claimed were sustained during the protest, told the Associated Press news agency.

Juana Celestina Batz Puac, another demonstrator, who witnessed the shootings told the Guardian that "our demands need to be listened to ... As indigenous people we are consuming their energy, but [Energuate] are getting rich off the people."

Following privatization, thousands of consumers filed complaints against UniÃ³n FENOSA "about the quality and excessive costs of the service - over 90,000 between January and May 2009 and popular discontent rose," according to Guatemala Solidarity Network, a UK non-profit.

Indeed monthly energy bills in the region have more than doubled for some customers because of how tariffs are currently set - some rural customers are paying for public street lighting even though they live in areas where there is none. Excessive electricity charges are affecting "the fragile financial situation of the indigenous and rural population of TotonicapÃ¡n," stated the mayors of the 48 communities in TotonicapÃ¡n in a press release dated October 4, the day of the killings.

UniÃ³n FENOSA was acquired by UK-based Actis Capital LLP, a private equity firm, when it bought a majority stake in the company in May 2011 from its Spanish owners. Actis then renamed the company Energuate, stating that it "looks forward to building upon the work of FENOSA and delivering a world class service to customers while operating to the highest environmental, safety, and governance standards."

Actis itself has roots in the Commonwealth Development Corporation (CDC), a UK government entity that was created in 1948 to invest in developing economies, following the retreat of the British empire from many of its colonies. The Actis private equity arm was set up by CDC in 2004 with UK government money.It was fully privatized in May 2012 by Andrew Mitchell, the UK Secretary of State in charge of international development at the time. (The sale netted the taxpayer Â£8.37 million or $13.4 million plus as much as Â£62 million in future profits)

Activists have been targeted in acts of violence and impunity that have plagued Guatemala for many years, even though a 36 year civil war in Guatemala between the government and a variety of leftist rebel groups supported by indigenous communities and poor farmers officially came to an end with the signing of the 1996 peace accords.

"On terms of impunity of the wealthy and powerful sectors linked to the economic elite and the military, fundamentally little has changed since the 1954 military coup," Grahame Russell, a Guatemala expert at Rights Action, a U.S. based human rights group, told CorpWatch.

For example, in 2010, Friends of the Earth called for international solidarity in the wake of three assassinations of activists in San Marcos, a department neighboring TotonicapÃ¡n, who were "believed to have been shot for their work in exposing the abuses against the population committed by DEOCSA."

Just two months after Actis acquired Union FENOSA, Lesbia Xurup, a 33 year old trade unionist, member of Communities in Resistance against UniÃ³n FENOSA, and active against alleged company abuses, was hacked to death on July 21, 2011 with a machete.

Union leaders in the UK have reacted strongly to these incidents. The UK General Union (GMB) called on Actis to take action regarding Xurup's assassination. "Tragically Guatemala is now the second most dangerous country in the world in which to be a trade unionist," said Brendan Barber, the general secretary of the Trade Union Congress (TUC) in the UK.

The source of these violence acts has been hard to verify. But the direct role of the Guatemalan military in the October 4 killings of Maya-K'iche' has struck fear in the hearts of many Guatemalans who recall the civil war years.

In reaction to last month's violent protest, Energuate told the Guardian that the company was not responsible for bringing about the conflict and shifted responsibility to the government for the high electricity rates.

"Very distressed by these recent incidents. Like others, we believe that the current system of paying for street lighting through a flat charge on customers' energy bills is unfair," Actis told the newspaper. "We continue to lobby the Guatemalan government to change it. Actis made a significant investment in the energy sector in Guatemala in May 2011. We are committed to providing high quality reliable electricity to customers at the right price."

An investigation into the events of October 4 is underway. So far Juan Chiroy Sal, an army colonel, together with eight soldiers have been arrested and charged with the TotonicapÃ¡n killings.

But the violence continues: on November 1, Mario Itzep of the National Indigenous Observatory, who filed a lawsuit with the Prosecutor's Office for Human Rights against the military for the massacre, said two men on a motorbike opened fire on him in Guatemala City.