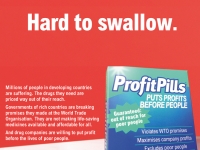 Novartis, the Swiss pharmaceutical company, will appear before the Indian Supreme Court Wednesday to appeal against a patent rejection for a popular cancer drug. A decision in favor of the company could have a devastating impact on cheap supplies of many kinds of generic drugs for poor patients.

Cancer Patients Aid Association (CPAA) - an Indian non profit that has treated 300,000 patients since 1969 - is a key plaintiff in the case against Novartis. "(Their) aggressive patent policy makes Novartis responsible for the misery of thousands of cancer patients in India today and if not restrained will have similar effect at the global level," says Y.K. Sapru, the CEO of CPAA.

"It would quite simply be a death sentence for us," Vikas Ahuja, president of the Delhi Network of Positive People, told the Guardian. Ahuja was diagnosed with HIV almost 20 years ago. "I am quite sure that if Novartis wins, other multinationals will follow suit and other drugs will become prohibitively expensive."

The patent that the judges will examine is for imatinib mesylate, which is used to treat various forms of cancer. Developed by Nicholas Lydon in the 1990s, imatinib mesylate is now marketed under the brand name Gleevec by Novartis.

In the U.S. companies are issued 20 year patents, after which the drug becomes available for anyone to make. Novartis filed for a patent on imatinib mesylate in India in 1997 but Indian regulators ignored the application. At the time India refused to recognize international patents on essential drugs in order to keep prices affordable.

In 2005, India changed its laws to accept patents, as part of an agreement to join the World Trade Organization. At the time Gleevec was being sold by Novartis at prices of $32,000 per patient per year while Indian companies were selling the same drug for roughly $2,100 per patient per year. (Gleevec now retails for almost $70,000 a year)

In January 2006 the Patent Controller in Chennai ruled that Gleevec was not novel under section 3(d) of the patents law which explicitly requires that patents should only be granted on medicines that are truly new and innovative.

Novartis -said the court - was attempting to prolong an expired patent through an industry practice called "evergreening" - a tactic by pharmaceutical companies change the composition of the medicine or the way that it is delivered in order to claim a new innovation.

"Novartis argued that increased bioavailability of the salt form of imatinib meant increased efficacy, entitling it to a patent on imatinib mesylate," a fact sheet from MÃ©decins Sans FrontiÃ¨res (Doctors Without Borders) explains. "But at the time, Madras High Court clarified efficacy to mean 'therapeutic effect in healing a disease.'The rejection of Novartis's patent application was therefore confirmed."

Novartis appealed the Indian decision in June 2006 and was rejected. The case has now wound its way to the Supreme Court where industry observers say a decision (which may not come down till November after several weeks of hearings) will have a dramatic impact of the future of foreign drug sales in the country.

For example, Leena Menghaney of Doctors Without Borders says that Indian generic drug manufacturers have been able to cut drug bills for HIV patients from $10,000 a year to just $150.

"If we lose, we don't know if we can continue sustaining a large number of patients in developing countries," Menghaney told the Wall Street Journal. "You could have existing drugs [in India] being patented and newer drugs about to go off patent being extended. It could be a big problem for us in the coming decade."

Pharmaceutical companies see the matter differently. If Novartis wins, the believe that India's $11 billion drug market could be worth $74 billion by 2020.

Meanwhile Indian regulators are looking at setting price caps on as many as 348 drugs, up from 74 today, in order to protect poor patients.

In recent months Indian regulators have come down on the side of patients. In March, PH Kurian, the controller general of patents, designs and trademarks in India, allowed a local company to manufacture and sell a generic version of Sorafenib, a drug used to treat advanced kidney cancer and liver cancer.

Bayer, a German multinational, had been selling Sorafenib, under the brand name of Nexavar, for $5,600 a month. (The average per capita income in India is a little under $100 ie two percent of the price of the drug) Kurian allowed Natco Pharma, an Indian company, permission to sell the drug at $176 a month.