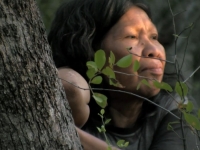 Grupo San Jose, a Spanish construction company, has been accused of bulldozing the forest home of the Ayoreo, one of the last uncontacted tribes outside the Amazon. The indigenous community lives in the Chaco forests, a semi-arid zone in northern Paraguay not too far from the borders with Brazil and Bolivia.

In late July, Paraguayan forestry officials caught workers for Carlos Casado SA "bulldozing forest, constructing buildings and reservoirs, and putting up wire fencing" on land that the Totobiegosode - a sub-group of the Ayoreo - are known to inhabit. The discovery was confirmed by a letter from the Paraguayan ministry of environment sent to Organizacion Payipie Ichadie Totobiegosode (OPIT)

"It's shocking to discover that one of Spain's biggest companies is involved in such scandalous behavior. Perhaps they thought that as this is happening in a far-off corner of South America, no-one would notice," Stephen Corry, director of Survival International, a UK-based NGO, said in a press release. "But if they continue, they will be directly responsible for the destruction of the Ayoreo's heartland - in flagrant violation of Paraguayan and international laws."

The Ayoreo are nomads who hunt wild pigs and large tortoises. They live in small communities of three to four families and shun the outside world. First contact was established by Mennonite farmers in the 1940s and 1950s, followed by the New Tribes Mission - a Florida-based evangelical group that attempts to spread the Bible by translating it to into other languages - who sponsored manhunts to track down the Ayoreo in 1979 and 1986.

Almost 70 years later, some of the members of the tribe have managed to elude all contact with others and environmentalists argue that this isolation needs to be maintained. One of the major reasons is that these tribes lack immunity to illnesses and diseases that are common elsewhere, and could die from exposure.

This isolation has been threatened in recent years as three Brazilian companies have started clearing land in the area to set up ranches: BBC SA, River Plate SA and Yaguarete PorÃ¡ SA. Survival was able to catch two of the companies doing illegal logging, using satellite imagery.

Guyra, an environmental group in AsunciÃ³n, estimates that some 1.3 million acres of Chaco forest have been cleared in the last two years, for cattle ranches. http://www.guyra.org.py/index.php/reportes-de-cambios-de-uso-de-la-tier… Lucas Bessaire, a U.S. anthropologist told the New York Times that the rate of deforestation was so rapid that even during the day, the sky turns "twilight grey" from the forest fires. "One wakes with the taste of ashes and a thin film of white on the tongue," he said.

Today the Mennonites farmers and Brazilian ranchers have coverted vast swathes of the Chaco region. Displaced Ayoreo live in poverty outside the new ranching boomtowns, sleeping under plastic bag tents under the trees.

"We are witnessing ethnocide in action," Gladys Casaccia and Jorge Vera of Gente, Ambiente y Territorio (GAT), a Paraguayan NGO that supports environmental initiatives for the indigenous people of the Chaco. "This crime is a human tragedy, an embarrassment for Paraguay in the eyes of the world - and it will only stop if those responsible are caught and punished."

"Paraguay already has the sad distinction of being a deforestation champion," JosÃ© Luis Casaccia, a former environment minister, told the New York Times. "If we continue with this insanity, nearly all of the Chaco's forests could be destroyed within 30 years."