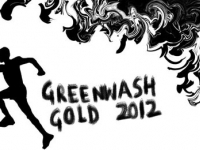 Rio Tinto, the global mining company, has been named as early front-runner for the Greenwash Gold award for the worst Olympic sponsor, with BP, the oil and gas multinational, in second place and Dow Chemical third.

The three corporations are banking on getting a good return on their purchase of the right to stick their names all over Olympic promotional material and activities. But Olympic branding has sparked bad publicity, too. Activists have accused the companies of "greenwashing" -  a tactic by which companies "preserve and expand their markets by posing as friends of the environment and enemies of poverty."

Last week, as London celebrated one month to the Games opening, demonstrators in India and London staged protests against "the toxic reputation" of Dow Chemical for failing to take responsibility for clearing up the site of the 1984 industrial plant disaster in the Indian city of Bhopal to ensure that the toxic waste buried there does not continue to poison people.

"Dow Chemical have been refusing to accept that their wholly-owned subsidiary, the Union Carbide Corporation, is wanted on the criminal charges of culpable homicide for the Bhopal Gas Disaster," said Colin Toogood of the Bhopal Medical Appeal. "We cannot understand why the Olympic organizers continue to defend Dow Chemical when these are the facts."

Campaigners are particularly angry that Lord Coe, the four-times Olympic medalist who runs the London Olympics organizing committee, has failed to honor a promise made in response to a previous demonstration that he would be happy to meet demonstrators to discuss the issues they had raised.

Human rights organization Amnesty International joined in the criticism, complaining that Coe's reaction to a mass of emails from the organization "was apparently to block all emails sent via our website, and disengage from any conversation about Dow's involvement in the Olympics. This does not reassure us that the Olympic Committee is committed to ethical, responsible investment."

Coe's reluctance to engage with the demonstrators is not surprising, given that the Olympic organizers have conferred the title of 'Sustainability Partner' on BP. The activists say that the company is "a world-class climate criminal", in the words of Emily Coats from the UK Tar Sands Network, who points out that "BP has just launched another shiny advertising campaign to continue to obscure from the public its devastating operations in the Gulf of Mexico, Alberta tar sands and pristine Arctic."

Other actions have already targeted the company in London. Members of the "Reclaim Shakespeare Company" leaped on stage and performed an anti-BP "guerilla Shakespeare" skit in front of a theater audience that included many BP employees.

Rio Tinto must also be bracing for protests. Richard Solly of London Mining Network, one of the backers of the Greenwash Gold campaign, says: "Rio Tinto has provided nearly all the metals for the Olympic Medals from mines in Utah where local residents have accused the company of creating so much pollution that it is contributing to premature deaths and respiratory diseases. You can't pretend to have 'the greenest games ever' when you're working with such a dirty and disreputable company like Rio Tinto."

"He does not want to hear about BP's investment in the most polluting form of oil, the environmental problems that come with Rio Tinto's medals or the fact that Dow Chemical is the company now responsible for the Bhopal tragedy," said Alexander.

Anti-corporate protests in London take place on fertile ground because of a series of corporate scandals, the latest of which are the $455 million fine imposed on Barclays bank for letting its traders manipulate the interbank lending rates such as Libor and Euribor to suit the bank's trading positions (even business-friendly Chancellor, George Osborne has said criminal investigations could follow) and revelations about offshore tax avoidance schemes.

So a report that Olympic sponsors will avoid paying up to $942 million in tax as venues will be treated like offshore havens during the Games will add insult to injury.

A report by Ethical Consumer claimed that under new tax rules ushered in as part of "Team Great Britain's" winning Olympic bid, corporate partners like Coca-Cola, McDonald's and Visa were given a temporary exemption from corporation tax as "non-resident" companies from March 30 to November 8.

The new rules also reportedly mean foreign employees working for the companies do not have to pay income tax in the UK.

"The real winners in the London Olympics are those companies who stand to make millions out of the greatest sporting event in the world," says Tim Hunt of Ethical Consumer.

On 28 July, the second day of the Olympics, the Counter Olympics Network is holding a demonstration in an east London park, on the doorstep of the main Olympic site, "to protest the government's turning of the games into a showcase for corporate, financial and military power at a time people are crushed by sweeping austerity measures."