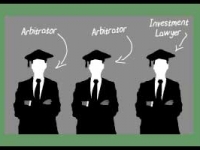 Dozens of highly paid international lawyers are pocketing millions of dollars in fees from multinational corporations to sue governments in secretive "arbitration tribunals" for profits they claim to be owed under international investment treaties, according to "Profiting from Injustice" - a new report from Brussels-based Corporate Europe Observatory and Amsterdam-based Transnational Institute.

If governments lose at these tribunals, they face penalties that can run into billions of dollars which are often passed onto taxpayers. This is despite the fact that the judgements sometimes run counter to public interest laws such as those on environmental and human rights. Even if the governments win, they may still be liable for multi-million dollar legal bills for defending themselves against frivolous lawsuits.

Either way, the lawyers earn a lot of money, notes Cecilia Olivet, a co-author of the report. "A handful of (law) firms are actively encouraging corporate clients to sue governments," says Olivet. "Meanwhile top arbitrators are using their influence to secure investor-friendly rules and sustain the flow of multi-million dollar lawsuits."

Members of the public cannot attend most of the trials conducted by these arbitration tribunals. Decisions are made by tribunal judges who are partly selected by the company bringing the dispute and final judgements cannot be appealed to a Supreme Court in any country or even in national parliaments.

Legal experts have denounced this trend. "Investment treaty arbitration ... imposes exceptionally powerful legal and economic constraints on governments and, by extension, on democratic choice, in order to protect from regulation the assets of multinational firms," writes Professor Gus van Harten of the Osgoode Hall Law School in Toronto.

The system of arbitration was originally created by Western governments to ensure the assets of their national corporations could not be seized by another country. The idea was to encourage investment across borders and create a system of fair international dispute settlement mechanisms that could be viewed as above the national interests of any single country.

Over the last two decades, these tribunals have evolved into a de facto international legal system that has accompanied the rapidly expanding global free trade system. While many of the arbitrations take place between two companies, many countries have signed up to the system via some 3,000 bilateral and international agreements (like the North American Free Trade Agreement between Canada, Mexico and the United States) which typically require the settlement of any kind of dispute between investors and foreign countries to be referred to these tribunals.

The number of such lawsuits registered at the ICSID has skyrocketed. In 1996, just 38 cases were under arbitration but by 2011, this had risen almost 12 fold to 450.

While the original idea of the system was to be fair and neutral, in reality it has favored the companies over the governments, and private interests over public, say the report authors. For example, the fees required to defend against such lawsuits are beyond the reach of most small countries: lawyers charge as much as $1,000 an hour to work on these cases and the average cost of fighting a case is over $8 million. The judges can be paid as much as $1 million to work on these cases.

These sums are small change for the Fortune 500 multinationals. So Philip Morris, the U.S. tobacco multinational, is suing Australia and Uruguay for compulsory health warnings on cigarette packets while Vattenfall of Sweden is suing Germany for â¬3.7 billion ($4.8 billion) for deciding to phase out nuclear energy following the Fukushima disaster in Japan. In the past U.S. billionaire Ronald Lauder successfully sued the Czech republic in the Netherlands for $270 million.

Now law firms are now aggressively trying to expand their business - some actively encouraged companies to take advantage of the collapse of the Libyan government and the Eurozone crisis in Greece to pursue lawsuits.

"Investment lawyers have become the new international 'ambulance chasers,' in a similar way to lawyers who chase hospital wagons to the emergency room in search for legal clients," write the authors of "Profiting from Injustice."

Some of the top law firms profiting out of this include Freshfields of the U.K., which was involved in 71 cases in 2011 alone, followed by White & Case of the U.S. with 32, and King & Spalding of the U.S. with 27. And over half of the judges hired to work on all known investment treaty disputes are limited to a tiny pool of 15 powerful individuals.

These lawsuits - some of which are speculative - make life difficult for developing country governments. For example, the Philippine government spent $58 million defending two cases against German airport operator Fraport, which the authors estimate could instead have paid the salaries of 12,500 teachers for one year or vaccinated 3.8 million children against diseases such as TB, diphtheria, tetanus and polio.

Ultimately Fraport lost the lawsuit when it was revealed that the company had offered bribes to secure the contract. But damage was done. "The costs of these legal actions weigh on governments in the form of large legal bills, weakening of social and environmental regulation and increased tax burdens for people, often in countries with critical social and economic needs," note the authors.

"International investment treaties are a powerful corporate weapon to rein in government and make taxpayers pay for business losses," writes Pia Eberhardt, the other co-author of "Profiting from Injustice." "Policy-makers who sign such treaties are handcuffing themselves and their successors for decades to come."

Today a few countries have started to realize that the system is stacked against them and have decided to opt out of the system of bilateral treaties altogether. (This is not as easy as one might imagine because many of the treaties are protected against regime change and revolution via "survival clauses" that make them binding on a country for 10-15 years, even after a country withdraws from such agreements)

To date Argentina has refused to pay the $1.15 billion in judgements against it. Bolivia, Ecuador and Venezuela have terminated several agreements. Australia has announced it will not sign any new ones while South Africa has said it will cancel its agreement with Belgium and Luxembourg.

Foreign investors are not happy about this trend but some governments are standing firm for now. "If there are investors who stay away because they feel that we don't have old-style, dated, antiquated bilateral investment treaties in place, I can assure you there are plenty of other investors from other parts of the world who are happy to come and don't insist on this," says Rob Davies, Trade and Industry Minister of South Africa.