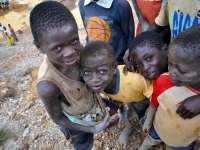 Children as young as ten climb down hand dug shafts into the Tilwezembe mine in the Democratic Republic of the Congo, with no protective equipment, to recover cobalt and copper. A new BBC investigation alleges that copper ore is then trucked to buyers from Glencore, a company that took in $186 billion in revenue last year.

Switzerland-based Glencore is the world's largest commodities company. Initially a fiercely secretive company created by Marc Rich (a U.S. citizen who was on the Federal Bureau of Investigation's Top Ten list for tax evasion but was pardoned by President Bill Clinton) Glencore is now listed on the London Stock Exchange. The company is hoping to merge with Xstrata, another mining company based in Switzerland, to create a behemoth with $90 billion in assets.

The Tilwezembe mine, which sprawls over a three square mile radius (7.5 square kilometers) in the southern province of Katanga, just north of Zambia, was officially closed in 2008 because of low prices of metals. But for the last four years, as copper prices have tripled, freelance miners have been extracting the ore and selling it to Groupe Bazano, a Glencore partner in the Congo. BBC investigators followed trucks that delivered the Tilwezembe copper to a Glencore refinery in Zambia.

John Sweeney, a BBC reporter interviewed Ivan Glasenberg, the South African CEO of Glencore, and told him that they had evidence of that the smelter was accepting copper that had been mined by children. "No, we don't buy copper from Groupe Bazano," said Glasenberg. "We definitely do not profit from child labour in any part of the world. This is adhered to strictly."

The use of children in mining dates back centuries. Children as young as four or five were legally allowed to work underground in British coal mines until 1842 when a law was passed setting the minimum working age at ten, later raised to 14 in 1885. The U.S. did not ban child miners until 1916.

Child miners are still common across Africa, even though many countries have laws making such work illegal. A previous BBC investigation in 2006 uncovered some 800 children at the Ruashi mine, also in Katanga not far from Tilwezembe, digging for copper and cobalt in 40 metre deep craters.

"All the way down there are ghostly-looking figures digging for copper, coated in choking grey dust. There are no safety standards. No one wears a hard hat. In the midst of all this, there are some boys ... working with bare hands and bare feet. We saw boys standing waist deep in toxic water, washing soil away from nuggets of copper. One, Antoine, told us he was ten."

Cobalt and copper are not the only metals that children dig for. An Associated Press investigation in 2008 across Guinea, Mali and Senegal, found children as young as four working in primitive gold mines that sold ore to middlemen in the city of Bamako, who then sent the precious metal to two companies in Geneva, Switzerland - Decafin SA and the Monetary Institute.

The pollution from gold mining has also poisoned children that live around the mines. In 2010, at least 284 children under the age of five were killed by lead poisoning in eight villages in Nigeria's Zamfara state after villagers ground rocks to extract gold.