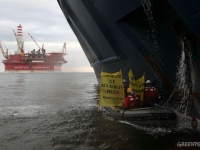 Sailors working for Gazprom, the Russian oil giant, used water cannons to remove Greenpeace activists who were protesting their plans to drill in the Arctic. The environmental group took action to signal the potential for a catastrophic environmental disaster as well as the impact on climate change.

Gazprom is drilling in the Prirazlomnoye oil field located in the Pechora Sea off the northwest coast of Russia. It is the first company to attempt commercial extraction of the 526 million barrels of oil that are estimated to be located in the offshore fields. To date it has been impossible to work in the region because it is blocked by thick ice for eight months of the year. The Prirazlomnaya rig, a Russian all weather oil platform, was specially designed at the Severodvinsk shipyard, to overcome the harsh conditions.

Last Friday climbers from the environmental group scaled the Prirazlomnaya rig and spent 15 hours holding up a banner that read "Save the Arctic." On Monday the Greenpeace activists used four speed boats to block the Anna Akhmatova ship from bringing workers to the rig. Sailors turned water cannons on the boats to force them out of the way.

"The force of the water was so intense it knocked my boots
off!" tweeted one Greenpeace activist who attempted to block the Anna Akhmatova. "So much
water, sometimes all you saw is white. Felt like we were in a hurricane,"
tweeted another. (Watch a video of the Greenpeace boat being flipped over)

"We climbed Gazprom's rusting oil platform backed by over a million people who have joined a new movement to protect the Arctic," Kumi Naidoo, the executive director of Greenpeace international, said in a press release. (Naidoo was one of the climbers.) "(I)t's not a question of if an Arctic oil spill will happen, but when. The only way to stop a catastrophic oil spill occurring in this unique region is to permanently ban all drilling now."

Gazprom received a permit to drill for oil in July 2007. The company submitted an official oil spill response plan that expired last month. The original document "shows that the company would be completely unprepared to deal with an accident in the Far North, and would rely on substandard clean-up methods - such as shovels and buckets - that simply do not work in icy conditions," says Greenpeace.

"We can often observe conditions when the operating company will not be able to contain and recover (potential oil) spill(s)," says Valentin Ivanovich Zhuravel, the project manager at the Informatika Riska, a Russian consultancy, that was asked by Greenpeace and WWF Russia to comment on the response plan."This can lead to significant pollution in the Pechora Sea coast and protected areas."

The company disagrees. "Last winter demonstrated the platform['s] safety and reliability in the Arctic environment," a Gazprom spokesperson told the Moscow Times in an e-mail. "A professional emergency response crew works night and day. Crews of the offshore ice-resistant stationary platform and support vessels were trained under a dedicated program for emergency response and first aid in case of sea accidents."

Greenpeace has received support for its protest from the local indigenous community in the Komi Republic. "The peoples of the north will no longer be bought with dimes and cents to stand silently by while the oil companies destroy our native land," says a support statement issued by the Save the Pechora River committee. "Our culture and history cannot be bought off and replaced with pipelines and drill rigs."

Meanwhile, ice cover in the Arctic Ocean has thawed to a record low of less than 4.0 million square kilometers. The numbers could drop further given that ice cover typically continues to melt till the end of September.

"This is due to climate change," Nicolai Kliem, head of the ice service at Danish Meteorological Institute (DMI) told Reuters.

Gazprom is not the only company to be targeting the Arctic. In the Nenets autonomous district, also in northwestern Russia, Lukoil and Bashneft are currently drilling for oil in the Trebs oil field.

Cairn Energy, a Scottish company, is exploring off the coast of Greenland.  And in Alaska, Shell obtained authorization to drill for oil in the Chukchi sea, with the personal help of Barack Obama, the U.S. president.